During his prime-time Oval Office address Tuesday night, President Donald Trump left out any reference to declaring a national emergency as a way to build a physical barrier along the southern border. Instead, he focused on reaching a bipartisan deal with congressional Democrats to end the partial government shutdown over the issue.

However, by Wednesday, Trump talked about declaring a national emergency if he couldn’t reach any deal.

“I think we might work a deal, and if we don’t, I may go that route,” Trump told reporters. “I have the absolute right to do [a] national emergency if I want.” 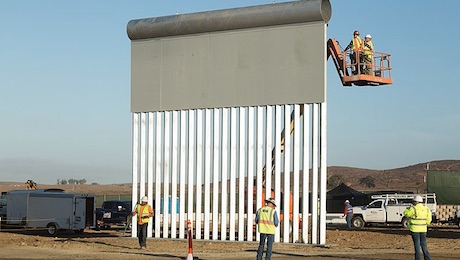 President Donald Trump can declare an emergency to build a wall, but should he?

When questioned, he added: “My threshold will be if I can’t make a deal with people that are unreasonable.”

During a White House meeting Wednesday, Trump asked House Speaker Nancy Pelosi, D-Calif., whether she would agree on funding a physical barrier along the southern border if he opened the government. Pelosi said no, and Trump walked out, Republican congressional leaders told reporters.

Declaring a national emergency isn’t rare or unprecedented. It is also subject to checks by Congress under a federal statute. A president typically makes such a declaration amid a natural disaster, public health threat, terrorist attack, or war.

The Trump administration contends the amount of drugs, the presence of criminal gangs, and the humanitarian situation at the southern border constitute a crisis or emergency.

Democrats contend the problems at the border do not constitute a crisis.

So, unlike a flood or a terror attack, a presidential declaration of a national emergency over the border situation would be a political question — which would be unusual.

Here’s four things to know about the process.

1. What Did Previous Presidents Do?

Presidents long have taken emergency actions to use the government to tackle an emergency without Congress, but it wasn’t until the 1970s that Congress passed a law to say not so fast.

President Abraham Lincoln took emergency actions without Congress during the Civil War, which few would dispute was an emergency.

President Woodrow Wilson was the first president to formally proclaim a national emergency. It happened on Feb. 5, 1917, during World War I, according to a 2007 report by the Congressional Research Service.

The goal was to limit the transfer of American ships to the possession of foreign individuals or entities. Wilson used executive authority to establish the United States Shipping Board to oversee water transportation. In March 1921, Congress terminated the board.

President George W. Bush notably declared a national emergency after the 9/11 terrorist attacks on the World Trade Center and Pentagon.

In 2014, after the Russian invasion of Crimea in Ukraine, President Barack Obama signed an executive order declaring a national emergency as a means to freeze U.S. assets of any individual who asserted governmental power in Ukraine without the approval of the Ukraine government.

2. Where Does the Authority Come From?

During the 1970s, Congress became increasingly concerned about the power of the executive branch after the Vietnam War and the Watergate scandal.

In November 1973, the Senate Special Committee on the Termination of the National Emergency, chaired by Sen. Frank Church, D-Idaho, asserted that emergency proclamations “give force to 470 provisions” of U.S. law.

These hundreds of statutes delegate to the President extraordinary powers, ordinarily exercised by the Congress, which affect the lives of American citizens in a host of all-encompassing manners. This vast range of powers, taken together, confer enough authority to rule the country without reference to normal Constitutional processes.

Under the powers delegated by these statutes, the President may: seize property; organize and control the means of production; seize commodities; assign military forces abroad; institute martial law; seize and control all transportation and communication; regulate the operation of private enterprise; restrict travel; and, in a plethora of particular ways, control the lives of all American citizens.

The new law put a statutory framework in place allowing a president to declare a national emergency, with limitations. Mainly, Congress may terminate the emergency declaration if it has the votes to do so. Also, a president must renew the declaration of an emergency after 180 days.

While entirely legal. an emergency declaration is significant and can set a precedent, said John Malcolm, director of the Meese Center for Legal and Judicial Studies at The Heritage Foundation.

“The term ‘national emergency’ is not defined in the National Emergencies Act, so every invocation of that authority by a president creates a precedent of sorts,” Malcolm told The Daily Signal.

In an interview with Fox News, Malcolm explained:

… There are 130-odd statutes in the federal code that empower a president to do this kind of thing under appropriate circumstances, but it would certainly be challenged in court.

3. Where Do Conservatives Stand?

Several other conservatives have weighed in during recent days about Trump’s possibly declaring a national emergency—pointing to the potential dangers of granting such authority to a president—any president.

Talk radio host and conservative writer Erick Erickson warned about what a future president from the left might do, tweeting:

On talk radio tonight I heard a "constitutional conservative" argue Trump should declare a national emergency to do what he wants on the southern border. Remarkable. There's no place they won't go. Once again, can you imagine how the right would have reacted if Obama did this?

“In this case, involving building a border barrier of some kind, that is a uniquely federal governmental responsibility,” Levin wrote. “The president can use the law to undertake such a project, and it can be challenged in the courts or overturned by a joint resolution of Congress.”

Levin, a constitutional lawyer and best-selling author as well as popular talk radio host, was chief of staff to Attorney General Edwin Meese during the Reagan administration. Levin wrote of Trump:

He needs to make his case under the statute, which is an easy case—that securing the southern border is a national emergency, given the chaos there, the related consequences, and the refusal by the Democrats to address it in any meaningful way and their holding the rest of the government hostage.

The president can use the legitimate legal tools available to him to try to solve these problems. Unlike Obama, he is not legislating by creating, say, DACA [Deferred Action for Childhood Arrivals], which is unconstitutional and violates separation of powers.

Congress set up this process. This isn’t a misuse of unconstitutional authority. It’s about statutory interpretation.

Andrew Napolitano, a former New Jersey state judge who is a Fox News legal analyst, contended that using emergency powers to build the wall isn’t legal because only Congress may appropriate money.

“The Supreme Court said no when Harry Truman attempted to do that. There was a steel strike during the Korean War, [and] he asked the Congress to authorize him to seize the steel mills and operate them against the strikers’ wishes and produce steel for our troops who desperately needed it during the Korean War,” Napolitano said on Fox News.

Napolitano added: “Stated differently, the Supreme Court has made it very clear [that] even in times of emergency, the president of the United States of America cannot spend money unless it has been authorized by the Congress.”

4. Where Would the Money Come From?

Napolitano is correct that no president may appropriate money. The question is whether existing money that Congress appropriated for national defense is available, according to The Wall Street Journal.

The Journal reported that $13.3 billion in the Pentagon construction budget may be available—more than twice the $5.7 billion Trump is requesting from Congress for the wall.

The newspaper cites federal law stating that a declaration of war or national emergency allows the secretary of defense to “undertake military construction projects … that are necessary to support such use of the armed forces” by using money from the Pentagon construction budget.

Images courtesy of The White House and U.S. Department of Homeland Security