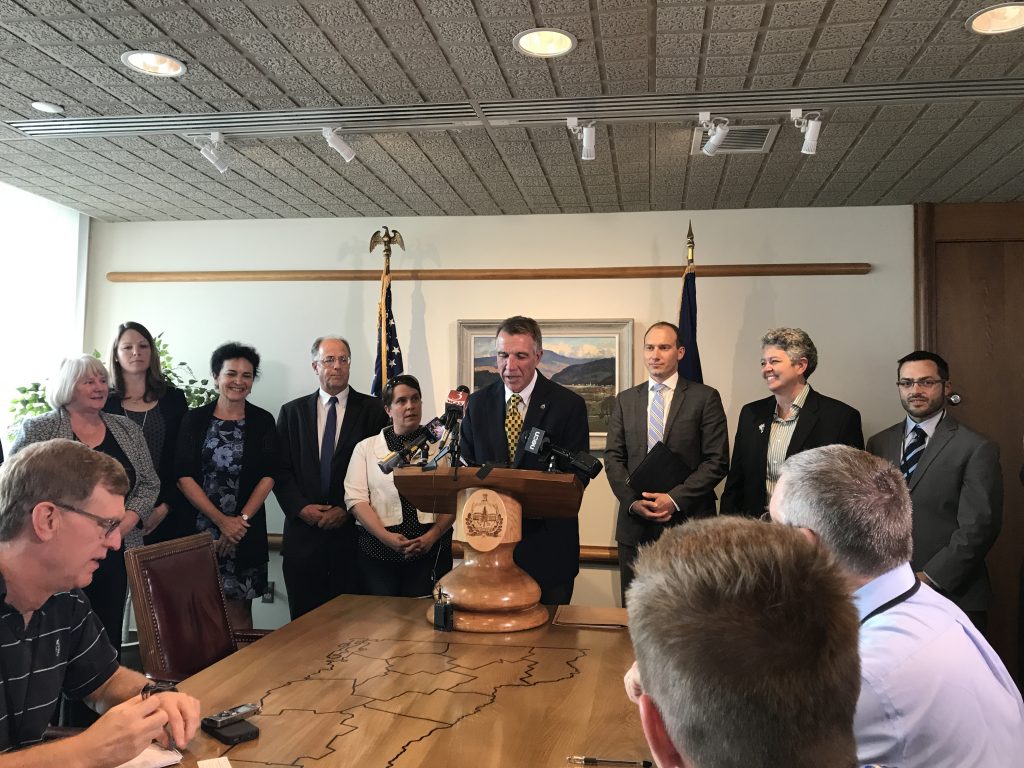 “In response to the federal government’s withdrawal from the Paris agreement, I’ve joined 13 other governors and affirmed the state’s commitment to meeting our share of the emission reductions of the United States Climate Alliance,” Scott said during a Thursday news conference.

“Despite what’s going on in Washington, I am committed to doing our part,” he added.

Scott reaffirmed that Vermont is still dedicated to getting 90 percent of its energy from renewable sources by the year 2050, a goal that originated during the Shumlin administration.

A cornerstone of Scott’s election campaign was to build a stronger economy and relieve Vermonters of high costs of living, initiatives which are often at odds with the climate change agenda due to high priced wind and solar.

Scott was asked how he’s going to work towards ambitious climate-based goals while still maintaining a strong economy.

“I keep saying this but it’s worth repeating: Growing Vermont’s economy, making Vermont more affordable, taking care of the most vulnerable — those are my objectives,” Scott said. “And I think we can have both of those concerns.”

He suggested that the professional diversity of the 21 commission members should allow for the right balance between the economy and environment. Members’ professional fields include transportation, agriculture, energy, construction, utilities, fuel, manufacturing, local government and more.

When Scott was asked about the high cost of renewables, he said the answer to that situation may be found looking to our northern neighbors.

“It may be expensive here in Vermont to produce renewable energy. … (But) we’ve seen in Canada, in particular, that they have an over-abundance of renewable energy that they’re willing to part with.”

He referenced a new power conduit that is “all permitted and ready to go,” which would run through the Lake Champlain area and get energy into Vermont as well as further New England.

“We’re hopeful, and we are working very hard to be part of that solution and to transfer power from Canada to the Boston region,” he said.

Though not mentioned specifically by Scott, Hydro Quebec has long been seen among energy industry insiders as an affordable way to purchase renewable energy without the high costs associated with wind and solar.

Scott stressed that a lot of the emissions from Vermont come from the transportation sector, so this is one area where changes could start within the state. He cited Quebec’s goal for 100,000 new electric cars to be operating in their province over the next few years.

“That’s why we are looking at trying to provide corridors for recharging and different opportunities for us from a couple standpoints,” Scott said. “One is to make sure that we ready for the future, but as well when we are asking the tourists from Canada to visit our state that they have a place that they can recharge.”

Scott was asked if he would accept proposals for new industrial wind turbine projects, something Scott largely campaigned against last year, even going as far to call for a moratorium.

“Well again, you know my feelings on wind development on ridgelines,” he said. “I’m not necessarily opposed to wind in some spaces, I just feel that we shouldn’t be destroying our ridgelines.”

Scott was asked if economic compromises by Vermont are worth it when considering the state is just a small piece of the global economy.

“That’s why I think there needs to be a combination of both (economic and environmental goals),” he said. “Making sure that we’re economically viable, that we have our eye on that, and that we possibly would be able to take advantage of (a renewable economy) and be an example for others.”

June Tierney, the commissioner of the Department of Public Service, told True North the economy and environment can improve together in tandem.

“All those economic opportunities have implications for the environment,” she said. “They’re directed safeguarding the environment, protecting and rehabilitating it, and making it sustainable for future generations. So it’s really important for us to not fall into the false dichotomy of thinking that one or the other when the discussion needs to be about where do they meet.”

“The commission is going to give us an opportunity to evaluate ways that we can boost economic opportunity and create jobs in … the green economy sector,” he said. “And that includes things like transportation change. What are we going to be driving in, and how, in ten years? How are we going to be able to advance vehicle electrification?”

Costello added that Vermont needs to attract youth and that these types of emerging industries could be just the attraction to lure them in.