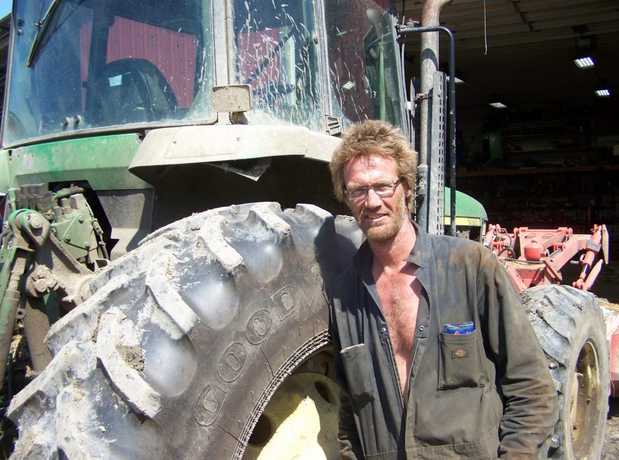 Vermont dairy farmer Gerard Vorsteveld: “I didn’t think I was living in Russia.”

FERRISBURGH, Vt. — A family of Vermont dairy farmers are dealing with a potential million-dollar environmental fine and court appearance after more than two dozen neighbors complained about the clearing of 2,000 trees and brush from the family’s own property.

Members of the Vorsteveld Farm removed the brush along Arnold Bay Road on the Ferrisburgh-Panton town line in western Addison County to better improve the drainage of their land.

Some Ferrisburgh town officials, apparently at the encouragement of Tree Warden Clifton Mix, would like to fine the Vorstevelds more than $1 million for cutting their own vegetation. Based on state law, such a fine may be illegal.

The hard-working Vorstevelds, made up of the families of brothers Hans, Rudy and Gerard Vorsteveld, operate one of Addison County’s largest dairy farms. Since spring, the three brothers have removed a dense tangle of trees, shrubs, wild parsnip, sumac, poison ivy and other weeds along one side of Arnold Bay Road to improve drainage and make the land more productive for growing high-yield feed corn.

The brothers, along with family members and hired hands, milk 1,000 cows. Their 2,400-acre farm straddles the towns of Ferrisburgh and Panton, within sight of Lake Champlain. The families inherited the land after their father, Lolke “Lou” Vorsteveld, died last year at the age of 81.

The Vorsteveld family arrived in Vermont from Emmen, Netherlands, in 1979. At that time, patriarch Lou Vorsteveld left the northern European nation because of excessive government restrictions —  he presided over a national government that became increasingly more intrusive in farming. He chose Vermont’s Addison County because of the many industrious Dutch-American families working the land there. Now his sons are scratching their heads over both the possible fine and the angry neighbors who don’t seem to understand the requirements of farming.

“Too much government — that’s what brought my father to Vermont,” Gerard Vorsteveld told True North in an intervew. “Too many damned regulations, too many bureaucrats, too many asinine rules. They even had a milk quota over there.”

Although born in Holland, Gerard Vorsteveld has been living in Vermont since age 5. The dairy farmer said the family operation took a turn when the neighbors called the tree warden about the clearing away of trees and brush.

“I didn’t think I was living in Russia,” Gerard Vorsteveld said. “The tree warden thinks he has jurisdiction over this. I don’t think he has the authority. Yes, the town and power company have the right to clean trees out, since it’s a right of way. But we own the land to the middle of the road. We own the land, we own the trees,” he said.

ALSO IN VERMONT: The Sanderses are just like the Trumps

While the farm sits on the Ferrisburgh-Panton town line, only the neighbors in Ferrisburgh have complained about the tree clearing. Residents on the Panton side of Arnold Bay Road have stayed out of the matter.

“It’s Ferrisburgh that’s bitching. I guess the tree warden is trying to do a really good job,” Vorsetveld said facetiously. “We haven’t done anything; we told them what we’re doing (to improve the land).”

Now that the town of Ferrisburgh has hired a lawyer, Vorsetveld said his family could be facing a fine.

The feud goes back a few years ago when the Vorstevelds bought the former Lowenstein Farm. They cleared a large amount of the roadside brush and trees to make way for neater, more productive farming practices. Similar tree clearing has been done on a large tract of farmland in Middlebury, sandwiched between U.S. Route 7 and Halladay Road — albeit not on a public right-of-way.

The controversy brings Vermont’s highway statutes into sharp focus. Who has the right to tell the landowner not to clear-cut trees on private property along a road? Clearly, Ferrisburgh’s legal counsel believes town government has the authority. The Vorstevelds see the law differently.

Vermont Statutes Title 19 regarding “Highways,” which concerns repairs, maintenance and improvements to (or along) public roads, contains the following statement: “A person, other than the abutting landowner, shall not cut, trim, remove or otherwise damage any grasses, shrubs, vines or trees growing within the limits of a state or town highway without first having obtained the consent of the Agency of State highways or the selectman for town highways.”

On first reading, the statute sounds simple enough: The property-taxpaying Vostervelds, the landowners, have the right to clear their own vegetation. But the statute also stipulates the penalty for violations: “Violation of Section 901 of this title shall be fined not more than $100 nor less than $10 for each offense.”

If the farmers are somehow found liable for removing their own wild vegetation, a fine of $1,088,000 may be imposed for the clearing of 306 trees with large trunks and 1,870 trees and shrubs with trunks six inches in diameter or less, according to some reports.

The non-profit Vermont Institute for Government, based in Middlesex, has written extensively about public right-of-ways, farmers and other landowners. In a recent pamphlet about Vermont highway law, the group’s Paul Gillies wrote: “The road in front of your house is probably public highway, (but) most likely the town doesn’t own the land under the highway; probably you own the land to the middle of the road. … The town has a duty to use its right-of-way responsibly.”

Considering the long battle, it’s clear that Vermont farmers and other landowners need a better understanding of what can, and cannot, be cut on their own land.

After a June 20 closed-door session attended by Ferrisburgh Selectboard members, the Vorstevelds and neighbors of Arnold Bay Road, the town attorney, James Carroll, indicated interest in reaching a settlement. However, he did not rule out the possibility of court action if common ground couldn’t be found.