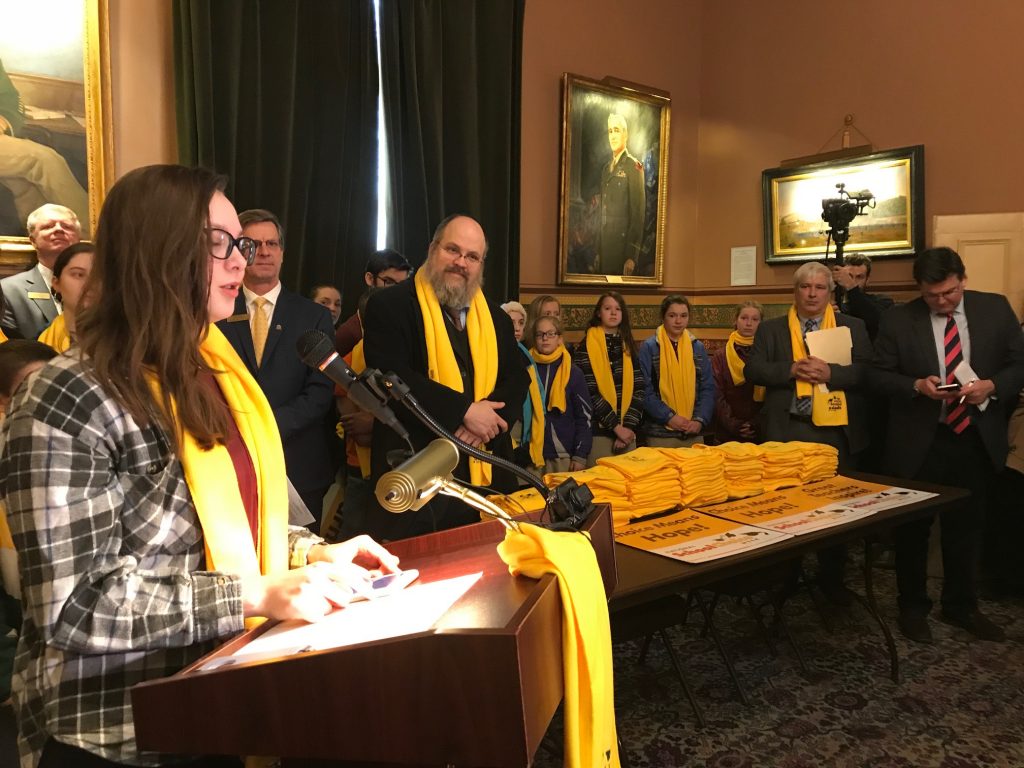 EDUCATIONAL CHOICE: West Nelson was one of four students to speak at the Statehouse on Wednesday regarding the benefits of being able to choose the school that fits you best.

MONTPELIER – The Statehouse was flooded Wednesday with enough school children that at least one lawmaker had to emerge from her committee room to hush all the hallway chatter.

The occasion was School Choice Week in Vermont, a now-annual event in which hundreds of students who benefit from of school choice remind lawmakers why the freedom to choose your school needs to be protected and expanded.

One of the four students who spoke at the morning news conference was Jae VanDerWielen, a sophomore at Long Trail School in Dorset. Prior to transferring to Long Trail, she attended a larger school of about 800 students that focused more on sports than arts.

Her passion is in performance arts, but she wasn’t getting that opportunity.

“I went into my freshman year crushed, knowing I was still in a school that I didn’t belong in,” she said. “I started underperforming and feeling upset all of the time.”

Eventually, her parents resolved to move to a town that offered school choice, and she chose Long Trail. The school has the kind of drama club opportunities she was looking for and a social atmosphere she is happy with.

“Without school choice, Long Trail wouldn’t be an option for me,” she said. “And without Long Trail, who knows where I would be now.” 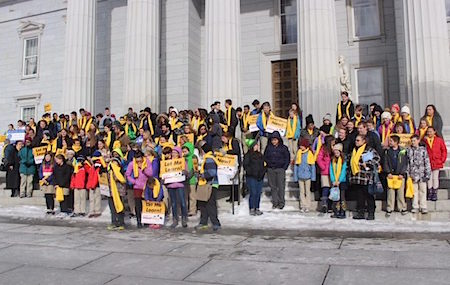 Dozens of Vermont students who attend the school of their choice using the state’s town tuitioning system crowd the steps of the Statehouse.

Another student to take the podium was Olivia Veale from Compass School in Westminster. Like VanDerWielen, at her prior school she was not in an ideal learning environment for her needs or personality.

“Eventually they gave up and I was left alone to swim through my thickly detailed imagination continually searching for a way out,” she said.

After years of struggle with the administration, it was finally agreed that she would be sent to a small independent school, which was Compass.

“I began rebuilding my education with two distinct goals: to graduate and to travel internationally with my new classmates,” she said.

Her Compass experience included a life-changing trip with classmates and teachers. She expressed deep gratitude that she was able to choose the school that allowed her to care about education again.

The event’s main speaker was Leslie Hiner, lead attorney for EdChoice, formerly the Milton Friedman Foundation for Educational Choice. One the themes of her speech was that Vermont led the nation in developing and promoting school choice for nearly 150 years.

“Vermont is the first school choice state in the nation,” she said. “Since 1869 you have had town tuitioning.”

She said that over the past decade momentum for school choice options has increased across the nation.

“In the country, since 2011, we’ve had a massive growth spurt in school choice programs. It was like that was the year that the nation woke up and said, ‘Oh yeah, we can do this.’”

Hiner emphasized that freedom to choose one’s school is a bipartisan issue and that school choice activists shouldn’t be afraid to cross party lines.

“Talk to that person on the other side of the aisle who you have never had a conversation with because you are just too distant, and narrow that distance, collapse it,” she said.

This day’s events were celebratory in nature, not about any specific legislative demands. The speakers didn’t discuss any particular bill, but instead promoted school choice in general. Rep. Brian Keefe, R-Manchester, who introduced each speaker, emphasized this when True North asked about a universal school choice bill written by Rep. Vicki Strong, R-Albany, in 2017.

“I don’t know the exact status of that bill right now, but I think today we are really not talking about the politics and the legislation,” Keefe said. “We’re here to celebrate the parents and the children and the advocates that are here.

“School choice and various plans [for] legislation are always on the table. It’s an evolving discussion and an important discussion to have.”

“Everybody loves choice provided that they can pay for it, and some families cannot,” he said later in an interview at his committee room. “The notion that everyone has choice is a false notion.”

Sharpe added that public transportation is not a given, and in some cases it may be difficult to get kids to the school that they choose.