The chair of the Rutland City Board of School Commissioners says next week’s meeting about the Rutland High School mascot debate should provide some conclusion to the matter, at least for the time being.

“The ad-hoc committee recommendation, that’s coming to the full board on Tuesday night,” Hurley Cavacas, Jr. told True North in a phone interview Thursday. “And then at that meeting, it will be the will of the board, as far as the decision goes with the acceptance of maintaining or changing the name however they want to see it fit at that time. But will be up to the board to decide that.”

In October 2020, the city’s school board voted 6-4 to get rid of the school’s mascot, the “Raiders,” along with its arrowhead logo. Social justice advocates claimed the name was offensive to Native Americans, and students later chose a new mascot, the “Ravens.” 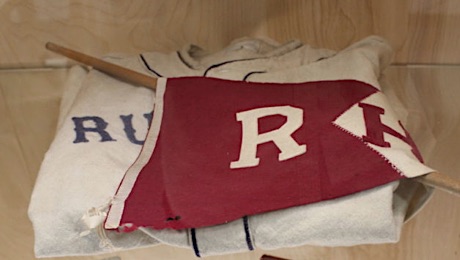 RAIDERS AGAIN?: The Rutland High School Raiders logo is beginning to reappear around the city, and it’s widely expected that the newly elected pro-Raider school board will vote to reinstate the mascot.

An ad-hoc committee that was formed in May for the purpose of examining the mascot issue will provide its final report on Tuesday. Specifically, the four board members placed on the committee (two pro-Raiders and two pro-Ravens) convened to examine whether proper board procedures were followed during the initial vote to dump the Raiders name.

According to a WCAX report, the committee is expected to report that proper meeting procedures were followed during the first mascot change vote. However, it’s also believed by many Raiders advocates that the report is not binding for the board’s decision on the matter. Moreover, it does not prevent the current pro-Raiders board elected on Town Meeting Day from voting to change the mascot back to the Raiders.

According to a report this week in Seven Days, signs and public references to the newly adopted mascot the Ravens have been largely absent, whereas local stores are selling Raiders paraphernalia again. Rutland High School’s scoreboard also says “home of the Rutland Raiders.”

The debate has consumed the community’s public meetings and social media. While the Raven mascot advocates argue that their mascot is student-created, recent images on social media show that the Raiders name is holding its ground.

“I would hope it’s the final point,” Cavacas told True North about the mascot debate that has consumed many school board meetings and public forums over the past year.

He added that there’s pressure on the board to get back to regular duties.

“We have so many other things that we really need to take care of, especially budgets and COVID in the schools,” Cavacas said.

At a public forum in June, members of the public argued for and against the mascot change. Among them was Sherlyn Anderson, a parent from Nicaragua, who said that schools need to get back to teaching other subjects.

“This is crazy — we should be teaching our children how to read, how to write, how to think like others,” she said.

One Twitter user was able to find a moment of humor in the otherwise divisive matter.

Rutland has gone national!
It’s the Ravens vs the Raiders tonight on Monday night football!

Members of the ad hoc committee will meet to discuss the issue with the full board on Tuesday, Sept. 28.