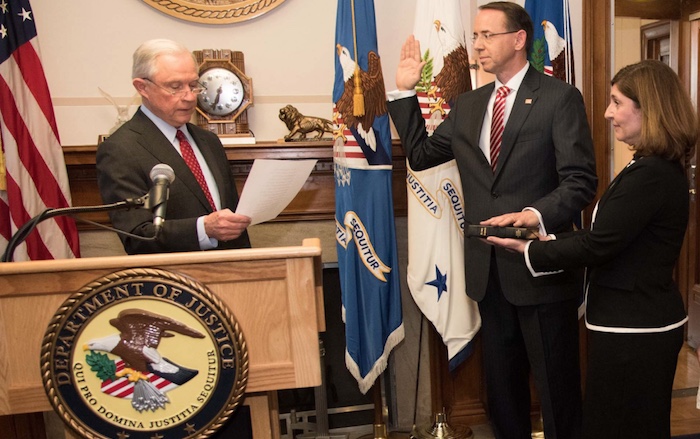 Deputy Attorney General Rod Rosenstein discussed wearing a wire to record President Donald Trump and volunteered to recruit cabinet officials to potentially remove the Republican from office, according to a bombshell report from The New York Times.

Rosenstein made the remarks in meetings with Department of Justice and FBI officials shortly after the May 9, 2017 firing of James Comey as FBI director, The Times reported Friday. Rosenstein took part in Comey’s ouster, writing a letter recommending that he be fired because of his handling of the Hillary Clinton email investigation.

According to The Times:

“Mr. Rosenstein made the remarks about secretly recording Mr. Trump and about the 25th Amendment in meetings and conversations with other Justice Department and F.B.I. officials. Several people described the episodes, insisting on anonymity to discuss internal deliberations. The people were briefed either on the events themselves or on memos written by F.B.I. officials, including Andrew G. McCabe, then the acting bureau director, that documented Mr. Rosenstein’s actions and comments.”

“I will not further comment on a story based on anonymous sources who are obviously biased against the department and are advancing their own personal agenda,” he said. “But let me be clear about this: Based on my personal dealings with the president, there is no basis to invoke the 25th Amendment.”

The 25th Amendment allows the vice president and a majority of cabinet officials to remove a president from office if they are determined to be “unable to discharge the powers and duties of his office.”

The Justice Department provided a statement from someone who was present during Rosenstein’s remarks about wearing a wire. The official said that Rosenstein was being sarcastic when he made the comment. But The Times cited other sources who said Rosenstein stated that he was serious about recording Trump and suggested other FBI officials could wear a wire.