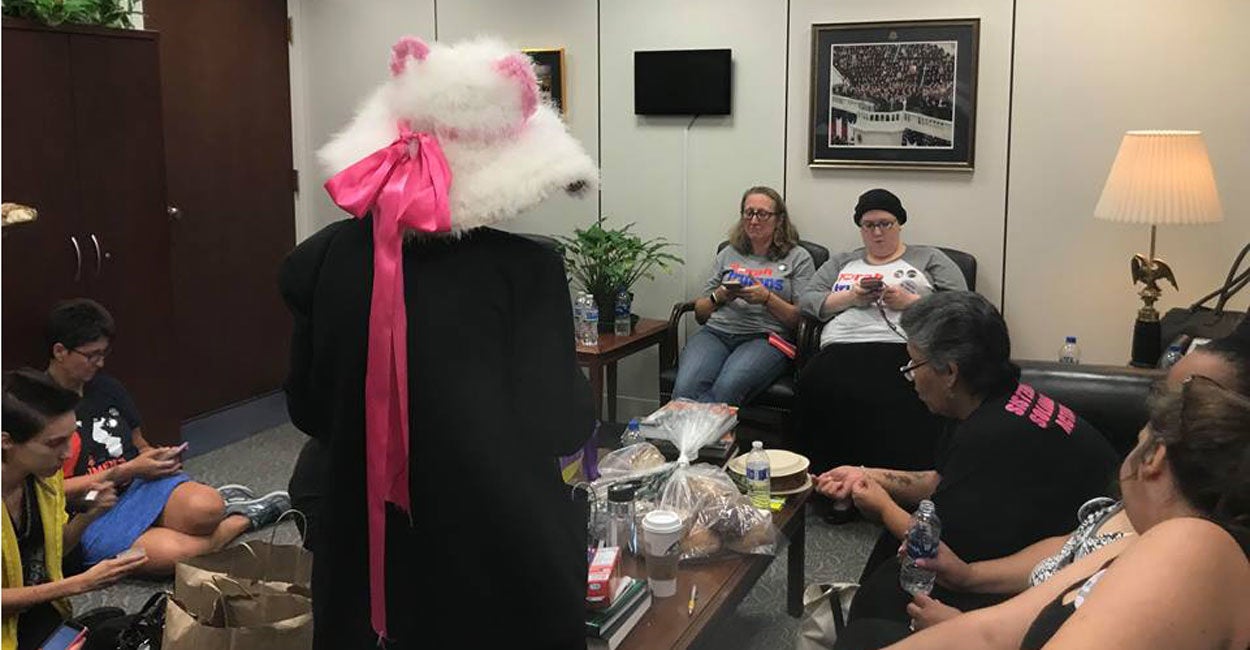 Protesters who swarmed the office of Sen. Chuck Grassley on Thursday say the woman accusing Supreme Court nominee Judge Brett Kavanaugh of sexually assaulting her when they were teens should not have to testify before the Senate Judiciary Committee.

Grassley, R-Iowa, is chairman of the committee, which is weighing the nomination of the appeals court judge for elevation to the nation’s highest court.

“[Christine Blasey Ford] and what she talked about is incredibly important, and we need a trauma-informed, much longer investigation done by an appropriate person and not just some withering questioning from disbelieving senators,” protester Noah Mamber, 40, told The Daily Signal.

Ford, Kavanaugh’s accuser, now a 51-year-old research psychologist in Northern California, told The Washington Post that Kavanaugh held her down, groped her, and tried to remove her clothes in a bedroom during a party in the early 1980s in Montgomery County, Maryland.

Kavanaugh has categorically denied the charge.

“I am here in solidarity with the women that have been retraumatized consistently when men in power aren’t held accountable for their actions,” another protester, Jake Marko, said. “I am also [here] because I myself am a survivor, and to be clear, I was opposed to Brett Kavanaugh’s nomination prior to the allegations that came about from the brave and courageous Dr. Christine Ford.”

Another protester who identified herself as Bambi Snodgrass, 58, said Ford should not have to testify with Kavanaugh.

In a tweet Wednesday, Grassley had offered a variety of ways to hold the hearing:

We’re going to continue to try to hear from Dr. Ford in any format she's comfortable w open session/closed session/private staff interviews/public staff interviews bc her information is very important. We’ve provided an opportunity for her to put her story fwd on Monday 2/4

Ford said Mark Judge, a classmate of Kavanaugh’s, was present during the alleged assault at a house party attended by a small group of teens, and that both Judge and Kavanaugh were drunk at the time.

The several dozen protesters, who spent a majority of their time in Grassley’s office eating lunch, were monitored by police and told not to crowd the desk area of Grassley’s staff. They eventually moved on to another office. 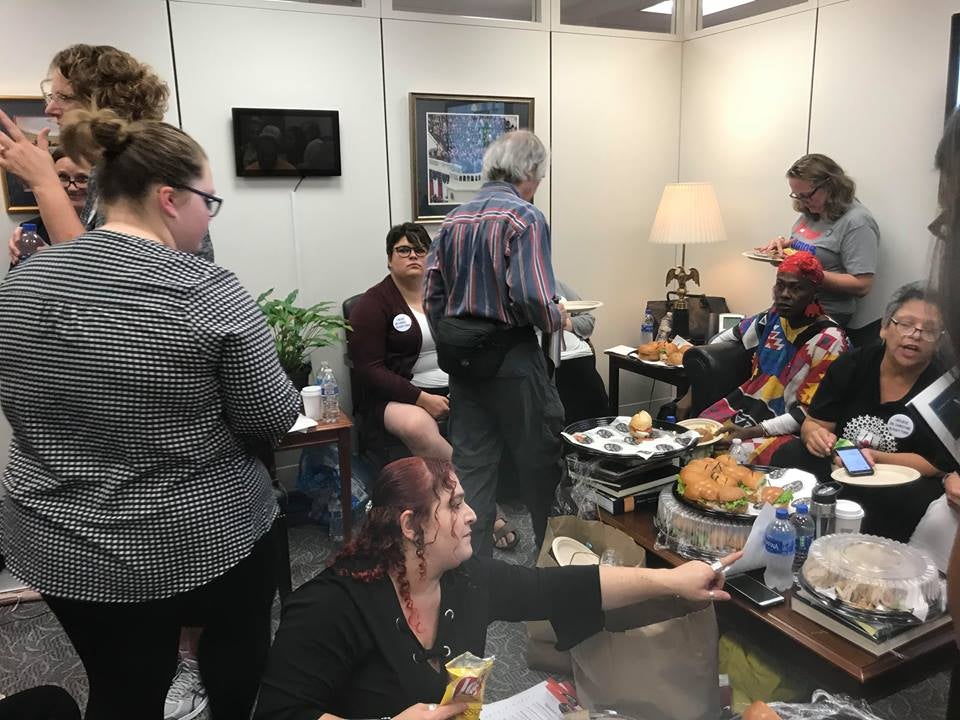 Ford reportedly wrote a confidential letter in July describing the incident and sent it via Rep. Anna G. Eshoo, D-Calif., to Sen. Dianne Feinstein, D-Calif., who serves on the Senate Judiciary Committee.

The last-minute accusation postponed the committee’s scheduled vote Thursday on Kavanaugh’s nomination, which then would have gone to the Senate floor.

Kavanaugh, a federal appeals court judge since 2006, is expected to testify Monday before the committee, but Ford’s lawyer, Debra Katz, said a “hearing on Monday is not possible, and the committee’s insistence that it occur then is arbitrary in any event,” according to The Washington Post.

“It doesn’t need to be rushed into by Monday. It should be something that is done more on Dr. Ford’s schedule, given that she is sacrificing so much to tell her story to the Senate and to her country, and so I support whatever is going to be best for the survivor,” Mamber said.

Ford is calling for an FBI investigation of her accusation before appearing before the Judiciary Committee, despite the panel’s invitation to her to testify. Katz said Ford could testify later in the week.

Ford revealed her identity for the article published Sunday by The Washington Post.

Kavanaugh, 53, has twice issued absolute denials of ever doing such a thing, the second time on Monday after Ford’s name was made public.

“I have a daughter who’s suffered from [post-traumatic stress disorder] as a result of being raped, and she will live with that for the rest of her life, and for Dr. Ford to come forward with credible evidence, it really isn’t about her being on trial,” Snodgrass said. “They’re not sending him to prison. They are trying to appoint him as a Supreme Court justice. That’s unacceptable to me.”