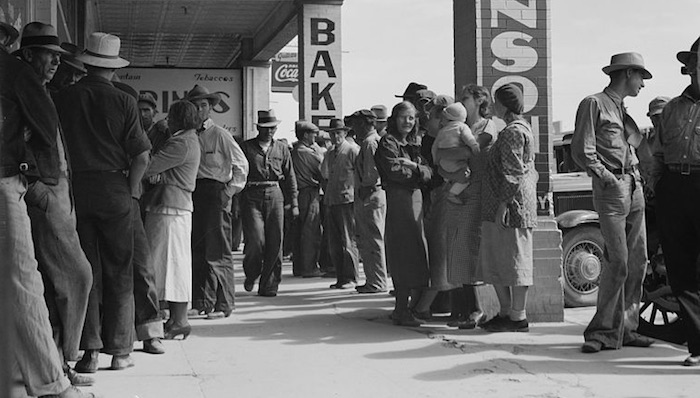 Americans wait for relief checks during Great depression in March 1937.

When the imminent threat of the COVID-19 pandemic subsides, we will undoubtedly be dealing with an economic situation of high unemployment and businesses in flux. Government policy will have a significant impact on how quickly the economy recovers — or not. Here we can learn some lessons from the Great Depression and the New Deal policies of the Roosevelt administration. Some of those policies were good, but many, and in the aggregate, actually prolonged and deepened the Depression.

According to an analysis by Harold L. Cole, a professor of economics at the University of Pennsylvania and Lee E. Ohanian, a professor of economics and director of the Ettinger Family Program in Macroeconomic Research at UCLA, the U.S. economy should have fully recovered from the 1929 downturn by the mid-1930s. Unfortunately, policies that favored centralized, government control over allowing the free market to function properly, particularly those limiting competition and forcing wage and price controls, extended the misery by another half decade. The authors write:

Total hours worked per adult in 1939 remained about 21% below their 1929 level, compared to a decline of 27% in 1933. And it wasn’t just work that remained scarce during the New Deal. Per capita consumption did not recover at all, remaining 25% below its trend level throughout the New Deal, and per-capita nonresidential investment averaged about 60% below trend. The Great Depression clearly continued long after FDR took office.

When we come through the other side of this virus-driven downturn, employers, especially small businesses, are going to be strapped for capital and will face challenges to get back up and running. Policies that make it more difficult and expensive for them to do so will be counterproductive. Such policies include those that artificially raise the cost of labor, energy (electricity, heating and motor fuels), and taxes. While government’s role in providing a safety net for citizens will be critical, the impulse to “help” people by saddling employers with high costs and complicated mandates will do more harm than good.

COVID-19 NEWS: Not all states shutting down economies to fight virus

Back to Cole and Ohanian: antimarket policies that “violated the most basic economic principles by suppressing competition, and setting prices and wages in many sectors well above their normal levels … choked off powerful recovery forces that would have plausibly returned the economy back to trend by the mid-1930s.”

Let’s not fall to the temptation to repeat those mistakes. For example, before the COVID-19 downturn hit, the Vermont Legislature voted to increase the minimum wage in Vermont. This will make it more difficult for employers to put more people back to work. Also, under debate were “reforms” to the Act 250 land use law that were designed to discourage investment, new taxes on fossil fuels that would make doing business — and getting to work in the first place — more expensive, and massive environmental regulations that would, again by design, stifle economic activity. If these initiatives made any sense before, they certainly don’t now.

Even amidst the pre-COVID-19 economic boom, Vermont’s economy was struggling under the burden of high taxes and complicated regulation. Back in January the British financial magazine The Economist noted in an article titled, “As wages grow across America, one state is left behind,” that real wages in Vermont were still lower than they were at the end of the last recession, and that, “In the past decade Vermont’s gdp has grown at two-thirds the rate of America’s. Critics point to a mountain of red tape and regulation.” In the post-COVID-19 downturn, just the policies Vermont’s already has in place will be absolutely crushing.

Cole and Ohanian offer some solutions as we move forward: “Tax reform that broadens rather than narrows the tax base and that increases incentives to work, save and invest is also needed.… A large fiscal stimulus plan that doesn’t directly address the specific impediments that our economy faces is unlikely to achieve either the country’s [or Vermont’s] short-term or long-term goals.” Here’s hoping our lawmakers are willing and able to face this reality and act accordingly.

4 thoughts on “Roper: Lessons from the Great Depression”