The Trafalgar Group poll, released Friday, was conducted Sept. 3 — September, before the first statewide debate conducted last week in which Welch reportedly explained his support for the increasing IRS funding by $80 billion because “there are a lot of Americans who make an awful lot of money who aren’t paying their taxes.” 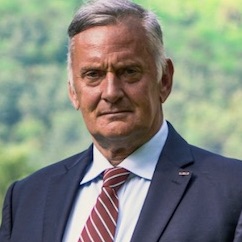 Welch has been in Congress since being elected in 2006. He handily won the Democratic nomination. Malloy, a Republican, is a retired U.S. Army officer and Perkinsville resident making his first run for office. He ran hard in the primary and easily defeated former U.S. Attorney Christina Nolan and businessman Myers Mermel.

“During the primary, many regular political observers – including myself – were surprised to see Malloy out-polling U.S. Attorney Christina Nolan,” Dame wrote in a letter to GOP members. “It is not difficult to believe the same thing may be happening again as President Biden’s divisive rhetoric and series of cascading crisis after crisis have put an unprecedented amount of pressure on Democrats like Peter Welch who have accomplished virtually nothing of significance in the past decade and a half but have instead been a rubber stamp on every bad policy over the past 2 years.”

The poll featured 1072 respondents who were likely general election voters. It claimed a response rate of 1.43%, a margin of error of 2.9%, and a 95% confidence rating. 57% of respondents were Democrats, 30% Republicans, and 13% were listed as other.

Trafalgar claims it was “named the best polling firm of 2016 presidential race, and this year, Real Clear Politics called us “‘he most accurate pollster of the cycle among those firms that polled multiple Senate and governor races.’”