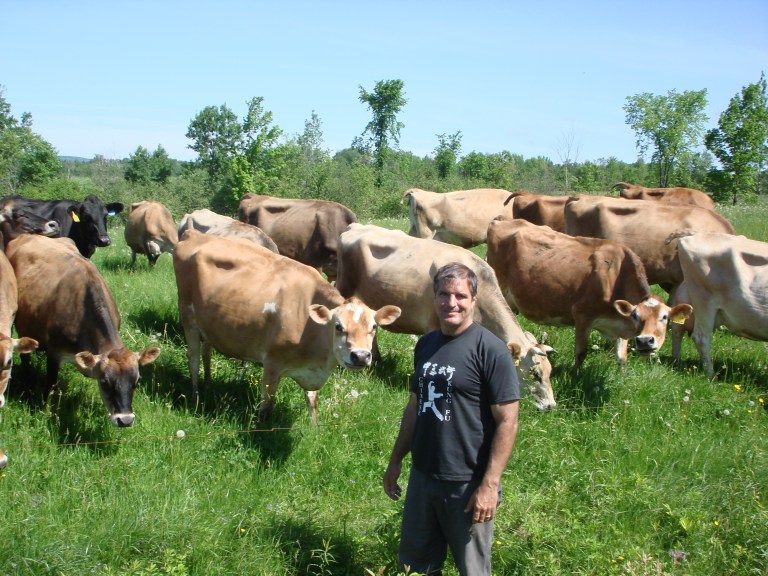 John Klar, a farmer and attorney from Brookfield, is the first Republican candidate to enter the 2020 Vermont gubernatorial race.

Amid a firestorm of criticism over a comment that he would not seek to repeal S.55, Republican gubernatorial candidate John Klar is reassuring voters that there will be no new gun-control laws in Vermont if he is elected in 2020.

“I will keep my word: From now on, no more gun laws,” Klar said Tuesday in an interview with True North.

Shortly after the political newcomer from Brookfield announced his candidacy Monday from the steps of the Vermont Statehouse, some observers pounced on his statement that he would not try to overturn S.55. Signed by Gov. Phil Scott in 2018, S.55 expanded background checks for private gun transfers, raised the gun purchase age to 21 and banned the sale of standard capacity magazines.

When a reporter on Monday asked Klar what he thought of S.55, the candidate said he was disgusted by the governor’s signing of the bill. 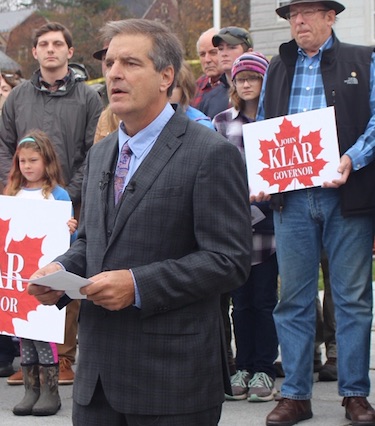 John Klar, speaking during his campaign announcement Monday, Oct. 28, 2019, at the Vermont Statehouse in Montpelier.

“I wanted to vomit,” he said. “I am a pro-Second Amendment person, I have a long record of that. I’m an attorney and I support the U.S. Constitution.”

But he added this: “I’m not trying to repeal that law. I accept, like with other things, when you lose something, you move on.”

That comment generated backlash from some gun rights advocates who think S.55 should be repealed.

Klar’s position on gun control is stated succinctly on his campaign website: “Vermonters have lost many firearms rights in recent years: the Agripublicans call for a truce. No new gun laws. No waiting periods for gun purchases, or restrictions against Vermont manufacturers of firearms.”

On Tuesday, Klar gave new details about how he would address gun-control proposals being floated for the upcoming legislative session.

On waiting periods for gun purchases, Klar said he would “hold the line” against it.

“There is insufficient evidence to prove that they will save any lives. They also are then putting an imposition on the whole [of gun owners] for the minority,” he said.

Klar added that waiting periods would devastate gun shows, gun culture and even the Vermont economy, which is bolstered by shooting sports. Klar also said waiting to get a gun could cost lives in domestic violence situations where self-defense is an immediate concern.

“Are we also going to end up killing more people than we save by preventing women who wish to defend themselves?” he said.

“I oppose restricting manufacturers,” Klar said. “I will fight it tooth and nail. I’ll fight it in the courts and I’ll fight it Constitutionally.  … I believe there are about 100 jobs at stake in [the town of] Georgia, and I’m sure it will not stop there. They are not the only manufacturer.”

“I’ve known John for probably 15 or 20 years, I’ve always thought of him as pro-gun. But if he’s not willing to fight for us, we can’t support him,” he said. “We understand that there are other issues, but with him not being a 100 supporter of firearms in this state, he’s lost a lot of votes.”

Cutler added it’s a good thing that Klar also said he would repeal S.55 if it were possible. Still, he said he wishes Klar had been clearer in his statements.

“Hopefully he’ll do something like that,” Cutler said. “Personally, I want to talk with him.”

Meanwhile, Klar has doubled down on his support for the Second Amendment while also recognizing the financial heft of the gun-control lobby.

“If gun owners do not believe that I support the Second Amendment, then they don’t know who I am and they haven’t looked at my record, number one,” he said. “And number two, if they think I can run on a ‘repeal S.55’ platform and not attract huge amounts of opposition money so that I lose, then they are helping to accomplish the opposition’s goal of the waiting period and closing factories and other things.”