While one Burlington elementary school is garnering media attention over its decision to cancel an annual Halloween parade in the name of cultural sensitivity, other seasonal celebrations around the state are pressing ahead with good old-fashioned spooky fun.

Edmunds Elementary School in Burlington canceled a Halloween parade last week after Principal Shelley Mathias sent a newsletter to parents announcing that a harvest celebration would replace the school’s traditional Halloween parade in which students dressed up in costumes.

“I know that this will be disappointing to some of our students, but there are enough students who are marginalized for any number of reasons that it isn’t appropriate to continue a tradition that has an effect of dividing students,” Mathias wrote in the school newsletter.

It continued: “Edmunds will continue to teach students safe Halloween trick or treat practices, because it is important to reinforce safe practices while trick or treating. Additionally, we will be sharing how to be respectful when selecting a costume for Trick or Treating. We hope to help our children develop the skill to recognize what is culturally respectful.” 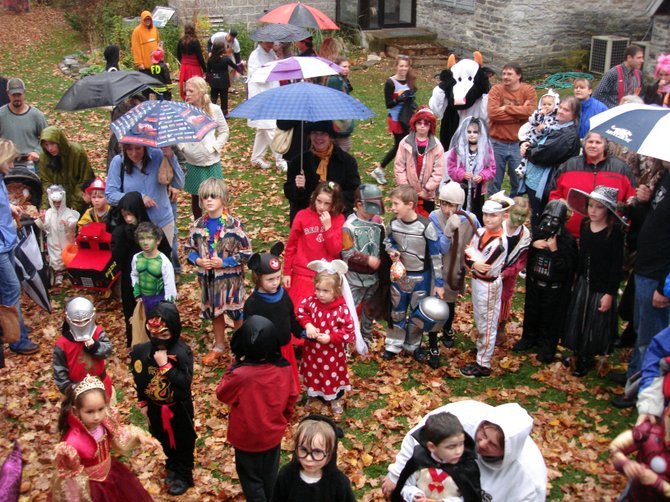 NO FEAR: Middlebury’s annual Spooktacular is a safe, fun event for local school children and their parents.

Despite political correctness fears in the Queen City, the city of Rutland proudly held its annual Halloween parade without fuss last Saturday.

This year, the 60th annual Rutland Halloween Parade was held Oct. 26 in the downtown area without any public complaints. The event is popular with parents and children, and many attend the parade in Halloween attire. The annual parade also attracts a number of dedicated “superhero” comic book fans.

During the 1970s, the Rutland parade was used as the setting for a number of interwoven superhero comic book story lines, including Batman (Issue 237), Justice League of America (issue 103), Freedom Fighters (Issue 6), Amazing Adventures (Issue 16), Avengers (Issue 83), and the Mighty Thor (Issue 207).

In Middlebury, the Better Middlebury Partnership hosted its annual downtown Spooktacular Halloween fun event for children and adults on Oct. 27.

For single-mom Caroline Turnbull of Middlebury, Halloween is a time for kids to feel free and have fun, not be overly cautious that someone might be offended by an ancient Celtic festival called Samhain.

“My 10-year-old daughter attends the Mary Hogan Elementary School,” she said, “and while the school does not have a Halloween event, Middlebury’s annual Spooktacular and candy parade is great fun for our local kids.”

Turnbull said that Halloween is a traditional time for children to use their imaginations, dress up and play someone else.

“My daughter is dressing up as a pirate this year,” she said. “She put on a temporary tattoo of a ship’s anchor to add to the fun. I think Halloween is a part of childhood; it’s important.”

In addition to Spooktacular, Turnbull said she took her daughter to a Halloween “haunted forest” party held at a family residence in New Haven. There, she noted, parents with children enrolled in area schools can enjoy an unofficial, private spooky event. The party is safely chaperoned by parents, Turnbull added.

Another public venue for non-PC Halloween fans in downtown Middlebury is the Henry Sheldon Museum’s “Spooky Night at the Museum.” The event, which runs from 6 p.m. to 9 p.m. Wednesday, Oct. 30, at the museum, is being held in conjunction with the a new exhibit titled, “Conjuring the Dead: Spirit Art in the Age of Radical Reform.”

According to museum spokesperson Mary Manley, the night will offer a range of spirit-inspired activities. However, it may not be so appropriate for youngsters.

“The evening is really meant for adults, but if kids do come that’s the parent’s call. I don’t think tarot card and energy readings are for the kids,” Manley said.

Penelope Wade and Sass Carey will provide tarot card, fortune telling and palm readings throughout the evening. Attendees can explore particular dreams of a loved one or pet who is gone, or can join dreamwork practitioner Annie Perkins for a free session.

The museum’s centerpiece of Spooky Night will be MOTH-style ghost storytelling told by local residents. (MOTH is a non-profit group based in New York City which promotes the art and craft of public storytelling.)

Spooky Night attendees may choose to wear costumes or not, according to Manley.

Meanwhile, parent Caroline Turnbull recognizes that Halloween isn’t for every child. Media-garnering public responses, such as in the case of the principal of Burlington’s Edmunds Elementary School, probably shouldn’t be surprising in today’s climate.

“Yes, there’s always too much sugar on Halloween, but it’s only once a year. I wouldn’t spoil this for my child,” Turnbull said.