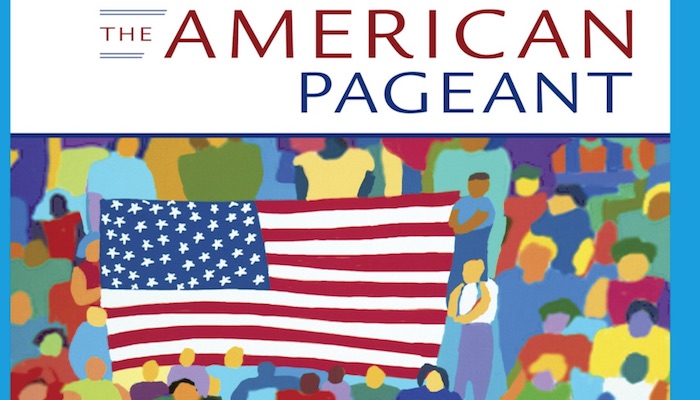 “The American Pageant” is published by Cengage, a company with more than 5,000 employees that is headquartered in Boston, but also maintains a significant presence under its Gale imprint in Farmington Hills, Michigan.

By Bruce Walker | The Center Square

“The American Pageant,” a longtime staple of history teachers and their students, has evolved over its previous 16 editions into a left-leaning handbook wherein all Democratic presidents are depicted as American heroes and Republican presidents portrayed negatively.

This is according to a report released Tuesday by the Education and Research Institute, an educational institute founded in 1974 to promote “a greater awareness and understanding of America’s history and traditional values.”

“The American Pageant” is published by Cengage, a company with more than 5,000 employees that is headquartered in Boston, but also maintains a significant presence under its Gale imprint in Farmington Hills, Michigan. The first edition of the textbook was issued in 1956 and is now in its 17th edition.

The ERI report notes “The American Pageant” “may be the bestselling American History textbook ever written.” Asserting “it has been read by tens of millions of students,” ERI continues: “Advanced Placement (AP) history courses especially like to use ‘The American Pageant’ as a stand-in for college level curricula for high-performing high school students. The problem is that ‘The American Pageant’ is a thoroughly unreliable narrator of U.S. history.”

ERI Chairman Daniel Oliver told The Center Square that a leftist bias is evident throughout The American Pageant.

“If a student was only exposed to American history through the propaganda of ‘The American Pageant,’ they’d be convinced that big business is always bad and big government is always good,” he said.

The report presents a side-by-side comparison of descriptions of American presidents. Whereas Democrats Woodrow Wilson and Franklin D. Roosevelt are described, respectively, as a “Lover of peace” and “the premier American orator,” Republicans Dwight Eisenhower was an example of “the bland leading the bland” and Ronald Reagan was “No intellectual.”

“Charles Beard’s most influential book, the progressive ‘Economic Interpretation of the Constitution of the United States’ was published in 1913. Beard argued that wealthy, upper-class people designed the Constitution in order to protect their economic rights and interests from the masses,” he said.

Perhaps the best known progressive interpretation of American history is Howard Zinn’s  “A History of the American People,” which politicians in Arkansas and Indiana have attempted recently to remove from their state’s high school curriculum. In 2010, some states attempted to pass legislation to prohibit similar adoption of the Texas State Board of Education’s updated social studies standards, considered by some as too conservative.

“First published in 1980, Zinn’s book may have been the first agenda-driven high school textbook,” Oliver said. “For amusement: Howard Fast, the communist author of ‘Spartacus’ and ‘The Immigrants,’ once lauded Zinn’s history as ‘a wonderful, splendid book – a book that should be read by every American, student or otherwise, who wants to understand his country, its true history, and its hope for the future.’”

The increasing perception that history textbooks reveal the left-leaning bias of authors has also been noted by John Pinheiro, chair of the history department and director of Catholic studies at Aquinas in Grand Rapids and author of the forthcoming “The American Experiment in Ordered Liberty”. In a conversation with The Center Square, Pinheiro noted he has recognized the same issue with college textbooks.

“I cannot find even one textbook specifically written for college students where the good outweighs the damage done,” he said.

“I use Paul Johnson’s ‘History of the American People’ as my main text along with primary sources,” Pinheiro added. “Johnson lacks American self-hatred on the one hand and overwrought filial piety on the other.”

“In the end, [Johnson] spends more time on culture, art, and American creativity and entrepreneurship than on politics, labor unions, and the leftists and radicals that books like American Pageant over represent,” he said. “The test of a good text is often its coverage of the Cold War, the Reagan Administration, the so-called ‘Gilded Age’ and ‘progressive eras,’ and the founding period’s notables like Washington and Jefferson.”

Bradley J. Birzer, a history professor and Russell Amos Kirk Chair in American Studies at Hillsdale College, concurs with both Oliver and Pinheiro.

“Teaching our children is a sacred duty,” Birzer told The Center Square. “We destroy that duty when we teach them nothing but partisan opinion.”

He continued: “’American Pageant’ has jumped the shark, becoming little more than a propaganda pamphlet for the Democratic Party. Not even worthy of being leftist, it’s merely tapioca – banal, conformist and hideously boring.