The videotaped killing of George Floyd has sparked widespread protests, many of them peaceful, but interspersed with acts of rioting, arson, vandalism, looting, and other violence, some of it directed at the police.

It has also reignited a nationwide discussion regarding police accountability, which has also taken many forms, ranging from calls to defund or dismantlepolice departments to more serious-minded proposals.

The United States is a country that is the envy of the world for many reasons. One of the main reasons people from all over the world flock to our shores is because we live under the rule of law. We have a written Constitution and a Bill of Rights that guarantee everyone rights as against the government.

Most citizens are law-abiding. But those who aren’t, and who commit crimes, must be held accountable. 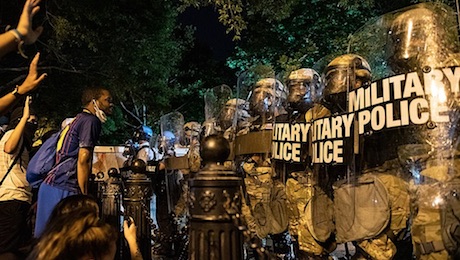 Some reforms have no merit, like abolishing police departments altogether. Others have merit and deserve serious study and consideration.

Well-trained, properly funded police forces who follow the rules are necessary to uphold the rule of law and protect all of us. Police officers, like military personnel or other first responders, deserve our support and respect.

That’s not to say there isn’t room for thoughtful reforms. This isn’t a new conversation or debate, as there was a similar national debate in the previous administration, which resulted in, among other things, the report of the President’s Task Force on 21st Century Policing in May 2015.

But given the fervor of those demanding change, it’s possible that federal and/or state legislators will pass laws to reform police practices and change the standards that apply to officers who violate their duty or the constitutional rights of individual citizens in order to hold them accountable for their misconduct.

Some of these reforms—if you can call them that—have no merit, like abolishing police departments altogether. Others have merit and deserve serious study and consideration.

But with the political temperature as high as it is right now, it will be difficult to engage in a thoughtful, honest debate about what the nature and extent of the problem is, and what policy solutions have the best chance of fixing those problems.

But we don’t shy away from difficult subjects just because they’re difficult. In fact, we roll up our sleeves and study the issues, gather facts, listen, tap into our own expertise and experience, read, digest, and then engage.

Some police departments, especially those in large cities, have a problem, and they know it. Large numbers of individuals, especially in communities of color, think that the police are biased against them. Some residents of those cities, and others around the country, think the entire criminal justice system, especially policing, is systemically racist.

Those beliefs are par for the course for many elites and college professors, which they gladly pass on to their students.

Their firmly held beliefs make it difficult for police officers to do their jobs in those cities. And those attitudes, based in part on negative experiences with police officers, put law-abiding citizens in those cities, especially minorities, in a dangerous place, because they need the protection and security that honest, hard-working police provide on a daily basis.

When the police are treated like a community pariah, that doesn’t help anyone, and it puts police and law-abiding citizens alike at risk.

At the same time, when police engage in misconduct, they break trust with the very people they are sworn to protect.

Misconduct is bad enough. But when misconduct crosses the line into criminal behavior (which we believe was clearly the case in the killing of  Floyd), then that scars a community—and sometimes the nation—for a long time and is hard to erase.

As we consider reform proposals, it’s worth bearing some facts in mind.

First, there isn’t really one “criminal justice system” in the United States in the sense of a unified, one-size-fits-all system.

Most crimes are handled at the local and state level, by elected or appointed prosecutors. There are some 3,141 counties in the United States, most of which have their own prosecutors or share a prosecutor with a neighboring county.

Similarly, there isn’t one humongous police department in the United States, divided into smaller sub-parts.

Just as there are thousands of counties, there are more than 12,000 local police departments in the United States, representing more than 800,000 sworn law enforcement officers. They range in size from a handful of officers to the New York City Police Department, which is the largest in the country with more than 36,000 officers.

So, the overbroad, inflammatory statement that the criminal justice system is “racist” is difficult to swallow. It’s just not true. It’s like saying “all educators are perfect” or “every New Yorker is rude,” or “an apple a day keeps the doctor away.”

The problem is, elites have peddled this notion for some time now to the detriment of society as a whole.

Major metropolitan police departments have made major strides in recruiting, retaining, and promoting minority officers in the past couple of decades. This is a welcome development. It should, and no doubt will, continue.

Third, of the roughly 375 million police-civilian encounters every year in this country, ranging from helping stranded motorists to showing up at a home to investigate alleged domestic violence to answering the calls of disturbance of the peace, and more, a minuscule fraction result in a civilian being killed, and most of those involve legitimate uses of appropriate force.

According to FBI statistics, African Americans make up more than half of known homicide and robbery offenders, despite constituting only 13% of the population.

Fourth, to those who argue that police officers have particularly itchy trigger fingers when confronting African Americans, research suggests that in fact, if anything, officers take longer to shoot black suspects than they do to shoot white or Hispanic suspects. That’s not to excuse any officer who unlawfully shoots anyone—which happens rarely, but it does happen.

But research indicates that white officers have lower “threat perception failures” (perceiving that a suspect is armed when he isn’t) than black or Hispanic officers when it comes to confronting black suspects.

The police have a dangerous job to do. Forensic studies have established that a suspect with a gun in his waistband can draw and fire his weapon in 0.8 of a second, faster than the time it takes for an officer to respond.

At a police memorial in Dallas in July 2016, after five police officers were targeted and slain, former President George W. Bush said:

Most of us imagine if the moment called for [it], that we would risk our lives to protect a spouse or a child. Those wearing the uniform assume that risk for the safety of strangers.

They and their families share the unspoken knowledge that each new day can bring new dangers.

But none of this seems to matter at this point. The police know that perception can become reality in the eyes of the general public.

The police also know that they carry enormous baggage because, for many years, some police in the South enforced overtly racist Jim Crow-era laws, often in a brutal fashion utilizing dogs, fire hoses, nightsticks, and more.

The killing of Floyd was inexcusable. Unfortunately, when a heinous crime like that occurs—regardless of whether it was the result of overt racism or just horrifically bad training or judgment—it rips the scab off an old and deep wound and rubs salt in it.

So, as we study serious reform proposals in the coming days and weeks, we do so with a common set of beliefs.

We do not believe that our criminal justice system and our police forces are systemically racist. Are there racist cops? Undoubtedly, there are. There are, regrettably, racists in every walk of life and every profession. As for racist police officers, special care should be taken to weed them out of the force as quickly as possible and, if they violate the law, they should be prosecuted and punished accordingly.

We believe that while peaceful protesters who are naturally outraged by Floyd’s killing should be respected and permitted to exercise their First Amendment rights, there’s no excuse for the looting and rioting.

Similarly, there is no excuse for, nor should we tolerate, anarchist groups like Antifa that encourage chaos, property destruction, and violence.

We believe that the current calls by some to defund and dismantle police forces are, to put it mildly, ill-advised, and that should such efforts succeed, supporters will reap what they sowed. Crime and misery will inevitably increase.

We also believe, however, that the criminal justice system and policing can always be improved and that some reforms toward that end might be beneficial.

As former prosecutors, we helped train police officers, and we understand how important continuing education is for law enforcement officers.

Several major police departments, for example, have curbed or banned the use of chokeholds, and the few that haven’t will, no doubt, follow suit.

The outsized role currently played by police unions in management decisions, which makes it difficult for police departments to weed out bad cops, may be ripe for reexamination.

Other potentially meritorious proposals might include increased use of body and patrol car cameras and increased funding for training on, among other things, de-escalation techniques.

Developing best-practice guidelines, greater review of use-of-force tactics and incidents, a review of policies surrounding no-knock warrants in drug cases, and greater transparency about police misconduct inquiries that are deemed to be meritorious are all ideas worth exploring in greater detail.

One thought on “Reform of policing: What makes sense — and what doesn’t”