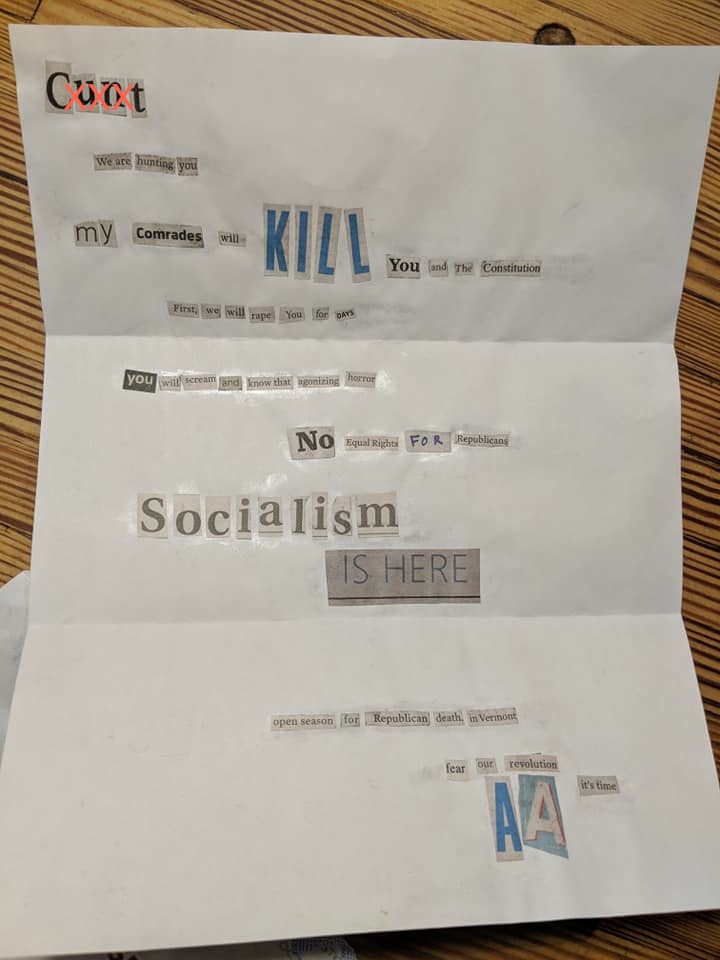 DEATH THREAT: “My comrades will kill you and the Constitution. … Open season for Republican death in Vermont.”

COLCHESTER, Vt. — A Republican House candidate on Saturday received a terrifying death threat in the mail that said “socialism is here” and declared “open season for Republican death in Vermont.”

Deserae Morin, who is running for office in the Chittenden 9-1 district, says she opened her mail in the morning and saw a message spelled out in cut-out print letters, including letters cut out from her own campaign materials.

The message, which looks like a collage of various newspaper clippings, sent a chilling warning to Morin and other Republicans:

C—, we are hunting you. My comrades will kill you and the Constitution. First, we will rape you for days. You will scream and know that agonizing horror. No equal rights for Republicans. Socialism is here. Open season for Republican death in Vermont. Fear our revolution. It’s time. AA

Morin told True North in an interview that she alerted local police and sent the message to the media.

“I want people to know this is what’s happening,” she said. “It’s happening all over, it’s happening everywhere. … [But] I didn’t expect to see this happen here.”

NOT A VICTIM: House candidate Deserae Morin says while she’s taking the death threat seriously, her campaign will go forward with even greater determination.

Morin said the threat needs to be taken seriously by anyone in the GOP.

“In the letter, it threatens all Republicans, it’s not just me,” she said.

Morin, 32, who is running for office for the first time, describes herself as a pro-constitutionalist, limited government, pro-individual-freedom type of candidate. She said that makes her “the opposite of socialism.”

The plain white envelope in which the letter was sent included no return address or personal handwriting that could be analyzed by investigators. The fact that the message contains some letters clipped from her campaign materials makes Morin think the author might be someone local.

Morin said she received some hostile reactions while knocking on doors, and wonders if she may have met the sender while out campaigning. She added that she also thinks the letter may be linked to a domestic terror group like Antifa, which threatens political violence while hiding behind anonymity.

The threat comes as top leaders within the Democratic Party this week called for open hostility toward Republicans. “You cannot be civil with a political party that wants to destroy what you stand for,” former presidential candidate Hillary Clinton told CNN’s Christiane Amanpour in a sit-down interview.

Former U.S. Attorney General Eric Holder, speaking about Republicans while campaigning for Democrats in Georgia, said, “When they go low, we kick them.” The GOP on Thursday tweeted a video montage exposing Democrat calls for aggression.

The Left: An Unhinged Mob. pic.twitter.com/d4YhXrAsXe

Morin said she thinks the letter was probably more about intimidation than physical violence. However, with a husband and children around, she said it’s important for police to get involved. 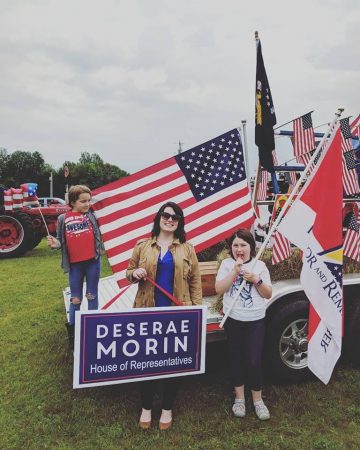 FAMILY TO TAKE CARE OF: Morin says she has to think about her family’s safety and may seek additional protection from veterans.

Ultimately, she said she wants to keep moving ahead in her quest to promote her platform of more freedom for Vermonters.

“I’m a young female who is very pro-Constitution, pro-liberty … [and] I’m very strong on gun rights, because of things like this,” she said. “I’ve experienced assault before and I don’t ever want to be a victim.

“I destroy their narrative because I’m not in their mold. I’ve talked to the other candidates, the candidates that are men, that are white and over 50 — nobody hassles them for being Republican, they just expect it. But when I go door-knocking, at least once a day I have somebody who just wants to rip my head off.”

Regarding her campaign, she said she is for expanding school choice, promoting a direct primary care system between doctors and patients that eliminates the health insurance middleman, and protecting Vermonters’ rights.

She reiterated that while she will still be out campaigning, she expects to beef up security efforts and seek support from the military veteran community.