The lengthy format permitted the candidates to provide 90-second answers, and 16-second rebuttals, to a variety of policy-related questions posed by the moderator.

But before things got going, a member of the audience stood up and began making a boisterous opening remark of his own. Charles Laramie, an independent candidate for governor from Fair Haven, who was not invited to appear onstage, interrupted debate moderator Mark Johnson by shouting a long statement.

“I served in the Navy and the Air Force, I swore to uphold and defend the Constitution of the United States, and the very rights that I swore to defend … I am being denied … by those two candidates, VTDigger, Anne Galloway and the sponsors here tonight. I ask you one more time to … stand down so we’re all allowed to debate,” he said.

Johnson allowed Laramie to vent for a few moments, then said, “Thank you, sir. … You had your say. You’re taking time away from the candidates.” 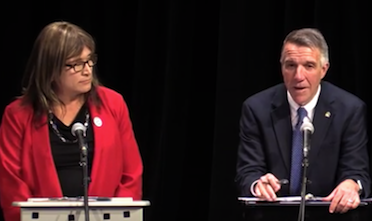 Johnson’s first question of the night appeared crafted to put Scott on the defensive. He said the Vermont State Ethics Commission found him in violation of the code of ethics for his continued role in funding DuBois Construction, his former company, which he left to avoid any conflict of interest.

Scott answered that the issue is old news, and that he willingly sold his share of the business to be governor two years ago. He said he has continued to help fund the company, however, to keep it in operation.

“I can’t go back … and violate the contract and tell DuBois Construction that they can’t do state work,” he said, adding that he has “no connection with the company” and is “just the bank.”

The next question, directed to Hallquist, asked if a political novice has what it takes to be an effective governor without some prior experience in state government. Hallquist, formerly known as Dave Hallquist, was the longtime CEO of the Vermont Electric Cooperative.

“I’ve had a long history of leadership that didn’t start with the Vermont Electric Cooperative,” Hallquist said. “ … I have a long history of collaborative leadership and have done some pretty impressive things. … I served on my local school board, mental health board, and served as town moderator. I do believe my experience qualifies me.”

Hallquist said that she voted for Phil Scott in 2016 but grew disappointed with the governor’s performance in office.

“When Phil talks about taking care of the most vulnerable and then vetoes a minimum wage bill, vetoes a family leave bill, and vetoes a bill that makes polluters pay, I question what affordability means. It certainly isn’t affordability on the lowest part of the income level,” she said.

Scott jumped in with a bit of humor before the moderator was able to pose another question: “I want to make something perfectly clear — I’ve never voted for Christine.”

Throughout the evening, the candidates differed on many issues, including the raising of the minimum wage.

“Working class Americans haven’t seen any real wage growth since the ’80s,” Hallquist said. “If this was adjusted for inflation (since the late ‘60s) it would be $22 an hour. … People aren’t making a living wage, working two or three jobs.”

She said this problem started with “Ronald Reagan and the myth of trickle down (economics)” and with “attacks on the unions.” She argued that the state could grow its economy by connecting every home with fiber-optic internet cables and rebuilding downtown areas.

Scott replied that raising the minimum wage is a knee-jerk reaction that only raises the cost of living throughout. Chittenden County is doing pretty well, but the other 13 counties are struggling, he said.

“Think about the (Vermonters struggling along the) Connecticut River. In New Hampshire there’s no sales tax, no income tax, with a minimum wage of $7.25. … (And) we have been increasing the burden on Vermonters throughout the years. That’s why we didn’t raise a single tax or fees — to give Vermonters a break.”

Scott said that he concept of “supply and demand” in the marketplace works when it comes to wages. He noted that employer UTC Aerospace in Vergennes has 150 jobs for engineers, paying salaries of $100,000 per year.

“There are jobs available, but we don’t have enough workers for the jobs we have here. The wage will go up by supply and demand,” Scott said.

Both candidates addressed what debate-moderator Johnson claimed was the No. 1 issue of Vermont’s rural residents: affordable housing. Each candidate acknowledged a need for more investments in the housing sector.

“In my first year, we made investments … we passed a $35 million affordable housing bond,” Scott said. “It’s going to leverage $85 million in private investments over time, the largest investment Vermont has ever seen. We’ve increased jobs by 4,000 and we’ll need housing for workers.”

Hallquist responded, saying it costs $250,000 to build a two-bedroom unit in Vermont, that to afford it you have to make $22 an hour.

“Our real earning power hasn’t gone up,” she said. ” … We have to help out by subsidizing. That $35 million bond is only 10 percent of what we need.”

The candidates sparred over other topics such as wind towers along Vermont ridge lines, with Scott opposing them and Hallquist supporting more turbines — but with better sensitivity to local residents. They also addressed the opioid crisis, a carbon tax and school district consolidation under Act 46, the state’s education governance law.

Regarding Act 46, Hallquist supports keeping small schools open. But Scott pointed out that Rochester High School was kept open with only two students enrolled, and was an example of the problem with refusing to close any schools.

The governor said while he doesn’t like “forced” school consolidation, the state has to address declining student enrollment. Vermont’s student population has dropped by roughly 21,000 since 1997.

“The Democrats passed Act 46,” Scott said. “It wasn’t my idea, but at least they tried to consolidate school governance. Rochester High School got down to those two students in the whole school before it was closed down. That’s not the way to go. That’s why we have to do something … we need to invest more earlier in a child’s life.”

While the candidates agreed on many of the state’s pressing problems, their solutions were widely disparate, with Hallquist looking for more government involvement and Scott arguing for more private and individual initiative.