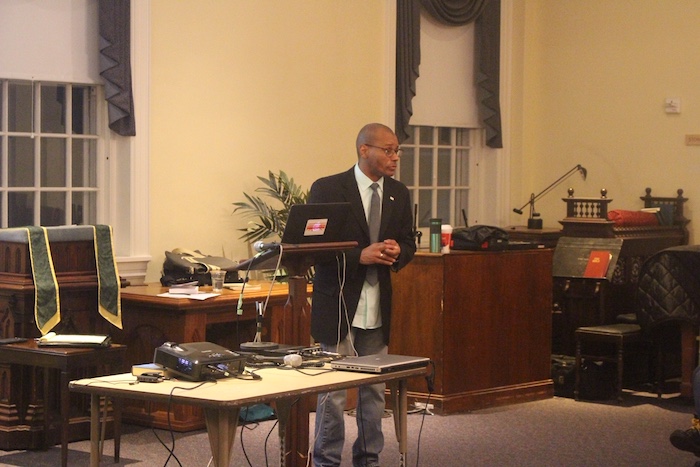 IS VERMONT A MODERN SLAVE STATE?:  Mark Hughes, director of Vermont Racial Justice Alliance, talks to about two dozen audience members about what he sees as problems with the wording in the Vermont Constitution regarding slavery.

The Green Mountain State is often cited as the first state in the nation to ban slavery by way of its constitution, back in 1777. But Mark Hughes, director of the VRJA, disputes that oft-repeated claim, and his group hosted two scholars to shed light on the topic.

“Vermont is not the first state to abolish slavery,” Hughes said. “Vermont is the only state that has had language permitting slavery for 242 years. … That is our designation.”

Hughes and others have proposed amending the Vermont Constitution to clarify language that, they say, permits slavery to this day. That proposal is known as PR.2, a “declaration of rights” for clarifying the prohibition on slavery and indentured servitude.

One of the scholars at the evening event was UVM professor Peter Teachout, an expert in constitutional law and history. He said any attempts to modify the constitution should be taken with caution.

“I’m concerned about being faithful to the framers of the Vermont Constitution and what they intended,” he said. 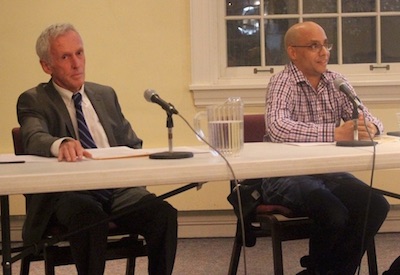 Teachout told True North that amending the constitution is “an awesome responsibility” and should be done “reluctantly and for compelling reasons.”

“Constitutional provisions, unlike statutes, are supposed to be permanent expressions of a state’s basic values and commitments,” he said. “It is a particularly awesome responsibility when what is being considered is amending a provision that has the sort of historic significance that Article 1 of Chapter 1 has.”

Teachout also talked about Article 1 during the event.

“It has always, until recently, been considered to make Vermont the first state constitution to ban slavery, in 1777,” he said. “Not just adult slavery but child slavery as well — an absolute ban.”

That all persons are born equally free and independent, and have certain natural, inherent, and unalienable rights, amongst which are the enjoying and defending life and liberty, acquiring, possessing and protecting property, and pursuing and obtaining happiness and safety; therefore no person born in this country, or brought from over sea, ought to be holden by law, to serve any person as a servant, slave or apprentice, after arriving to the age of twenty-one years, unless bound by the person’s own consent, after arriving to such age, or bound by law for the payment of debts, damages, fines, costs, or the like.

UVM professor Dr. Harvey Amani Whitfield also spoke on the topic. Whitfield is a professor of U.S. and Canadian history and the author of five books on slavery, including “The Problem of Slavery in Early Vermont, 1777-1810.”

He argued that despite the apparent ban in 1777, Vermont had examples of owned slaves for at least three more decades, and that this carryover was not unique to Vermont.

“What I recognized was something that I knew from the research that I’ve done on Canada and the research that I’ve done on other parts of New England and the Northern states, and that was that slavery sort of died a long death,” he said. “It doesn’t immediately end in Massachusetts any more than it does in New York, New Jersey, Pennsylvania, and I wanted to figure out what was the case in Vermont.”

Whitfield said slave transactions in the state after 1777 demonstrate that slavery was not prohibited.

Hughes, an outspoken social justice activist who says he intentionally excludes whites from some of his meetings, told True North why he feels it is important to revisit this issue some 242 years after the fact.

“This old constitution is an interesting document because it’s basically the lynchpin to every construct of our society,” he said. “The constitution is the yardstick that is used when legislation is created, it’s the standard that’s considered when courts decide cases, it’s the common ground that everybody stands on when they take an oath.”

In particular, he takes issue with the phrase “bound by law for the payment of debts, damages, fines, costs, or the like.”

He noted that with the minorities today having high rates of incarceration and poverty, any language in the constitution that might appear to allow slavery needs to be addressed. Otherwise, he said, it promotes “systemic racism.”

State Rep. Brian Cina, P-Burlington, also attended the event. He told True North he supports PR.2 because the constitution is the foundation of the state’s system of law.

“It’s the measure by which the courts will make rulings on subsequent laws,” he said. “So we want to make sure that our constitution is clear on this issue so that if other laws are being questioned then when they look back at the foundation, they can make sure there aren’t any laws that are reinforcing systemic racism.”