Reid Hoffman, the billionaire co-founder of LinkedIn, is a 1985 graduate of the Windham County-based Putney School. According to an Axios news report he and fellow leftist billionaire investor George Soros have created a new company to bankroll local news outlets across the country. 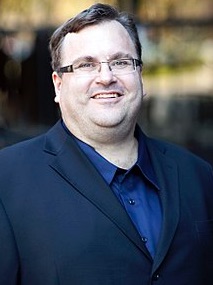 Print and electronic media nationwide have taken terrific financial losses due to the pandemic, with the loss of advertising revenue during the lockdowns and changes in consumer purchasing patterns. Now, leftist billionaires like Soros and Hoffman are trying to ride to the rescue.

Good Information, Inc. “aims to fund and scale businesses that cut through echo chambers with fact-based information. As part of its mission, it plans to invest in local news companies,” Axios said.

Both Hoffman and the chief executive he hired to run Good Information have a checkered political past of questionable electioneering for Democratic candidates.

The only child of California lawyers, Hoffman graduated in 1985 from the Putney School “where he farmed maple syrup, drove oxen and studied epistemology,” according to Wikipedia entry. Hoffman credits Putney with teaching him to be a problem-solver instead of just mastering an academic discipline, according to a Nov. 17 Yahoo Finance report.

The Putney School is an independent high school in the Windham County town of Putney. According to its Wikipedia entry, the school was founded in 1935 by Carmelita Hinton on the principles of the Progressive Education movement and the teachings of its principal exponent, John Dewey. William Hinton ’36, was an author and agricultural advisor to the People’s Republic of China. Joan Hinton ’39, was an atomic physicist and dairy farmer in China.

Today, Putney School is a co-educational, college-preparatory boarding school, with a day-student component, 12 miles outside Brattleboro. The school enrolls approximately 225 students on a 500 acre hilltop campus with classrooms, dormitories, and a dairy farm on which its students work before graduating.

Graduates who stayed in Vermont include Olympic skiers Bill Koch and Tim Caldwell and U.S. Attorney William Gray. Graduates who went on to Hollywood fame and fortune — or at least steady work — include actors Tim Daly, Tea Leoni, Felicity Huffman, and Ken Olin. Politically-minded grads include two Kennedys. Business leaders include a CEO of Seventh Generation – and Hoffman, who has built an astounding career as an internet company builder and investor.

In addition to co-founding LinkedIn, Hoffman was an early investor in Facebook – and reportedly introduced Mark Zuckerberg to the company’s first big investor, Peter Thiel, according to Wikipedia. He was a founding member of the Board of Directors of PayPal, also serving as its Chief Operations Officer (COO). He was Executive VP when PayPal was sold to eBay for $1.5 billion in 2002. Hoffman became a Microsoft board member in 2017.

Hoffman is linked to a flawed app in 2020 Iowa caucus. ACRONYM, a progressive not-for-profit funded by Hoffman, was majority owner of Shadow, the creator of the app for the 2020 Iowa caucus. Flaws in the app resulted in lengthy delays in counting votes. The chief executive of ACRONYM is Tara McGowan, described by Axios as “a former Democratic strategist.”

McGowan will be the chief executive of Good Information, Inc. According to truthpeep.com, McGowan was married to a senior aide to then-candidate Pete Buttigieg, who, despite emerging from the caucuses with fewer votes than Vermont Sen. Bernie Sanders came out on top with the most delegates.

Hoffman apologized in December 2018 after the New York Times reported that he funded disinformation against GOP candidate for Senate Roy Moore in a 2017 special election.