In mid-March, before lawmakers began social distancing, the Senate Committee on Natural Resources and Energy heard from energy experts on how effectively doubling portions of the state’s Renewable Energy Standards could have dramatic consequences for ratepayers and require massive amounts of new solar to be built across the Vermont landscape.

The state’s Renewable Energy Standards are green energy quotas for the energy utility purchases. A bill backed by environmentalist lawmakers revises those standards to require 100 percent renewable energy by 2030.

Each explained that language proposed in S.267, the bill which bumps up renewable quotas, is going to hit Vermonters’ wallets. And it might do little to reduce carbon emissions. 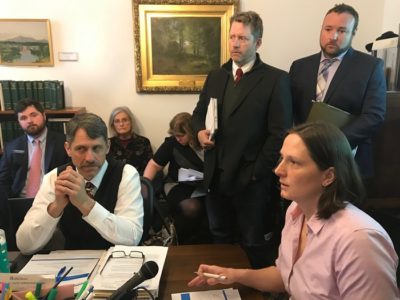 RENEWABLES AT WHAT COST?: Vermont Public Power Supply Authority Melissa Bailey told the Senate Committee on Natural Resources and Energy last month that doubling the state’s renewable energy requirements for electric utilities could be among the most expensive options yet for reducing carbon emissions.

“We’re concerned that if this is a carbon-reduction strategy, there are other strategies that could be much more effective at lower costs,” Bailey said. “As a reminder, we spent a good deal of time discussing Efficiency Vermont’s potential to spend $6 million dollars over several years on combating greenhouse gas emissions and climate change.

“This bill imposes costs of magnitudes larger than that, so we do have significant concerns about the magnitude of costs when this seems to be sending the state on one path for achieving some climate benefit and it’s an extremely expensive path.”

The path would require a heavy reliance on the increased installation of solar arrays. Castonguay suggested 1,200 megawatts of total solar would be required to fulfill these proposals.

Kieny said if Vermont is ever to meet ambitious RES requirements, the threshold for a project to qualify as net metering should drop from 500 kilowatts down to 150 kilowatts.

Castonguay broke down some of what these new solar requirements would mean for ratepayers.

“When we break down the costs, we have sort of two buckets. … It’s essentially an additional $15-$25 million in that year, so over 10 years it’s over $150-$250 million, and this is before any transmission upgrades.”

Then he broke down the transmission costs.

“Per the VELCO long-range plan, if it were built out across the state as it’s been currently going, you’d have anywhere from $150 to $500 million dollars of transmission investments and upgrades,” he said.

All this new solar development could take up a lot of Vermont’s landscape. At about 5 acres per megawatt, 1,200 megawatts of solar would amount to about 6,000 acres, or an area close to the size of Manhattan.

Bailey noted that even at the current pace, finding where to put all the solar is tricky.

“VPPSA is in the process of deploying about 10 megawatts of solar, finding locations that pass muster with the Agency of Natural Resources. … We’re seeing projects commissioned through the standard offer program taking three years to come online,” she said.

“I think what Mrs. Bailey is pointing out is, by the cost estimates that all the utilities and the department are putting out there, [it’s] in the tens of millions, possibly hundreds of millions statewide,” he said. … We’re gonna add millions of dollars to ratepayers for not that much benefit if we’re chasing carbon.”

Without increasing the current RES program, a study last year by Chicago University found that seven years after the implementation of such programs, for every increase of 1 percent in renewable energy, there is a 6 to 7 percent increase in ratepayer costs.