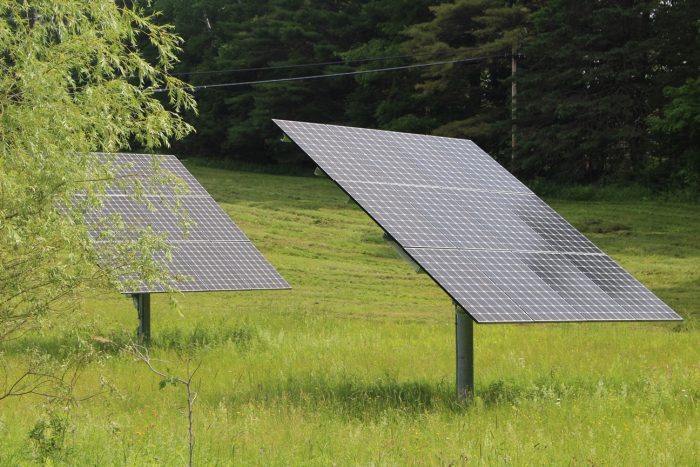 AT WHAT COST?: A new study out of Chicago says for every extra percentage of green energy there’s about a six or seven percent increase in power costs.

A study by the Energy Policy Institute for the University of Chicago has found that green energy quotas have strong adverse effects on energy prices.

These mandates, best known as Renewable Energy Portfolio standards, are in use in 29 states including Vermont.

The study states that for every single percentage increase in renewable energy, there are several percent increases in the cost to ratepayers.

“The estimates indicate that seven years after passage of an RPS program, the required renewable share of generation is 1.8 percentage points higher and average retail electricity prices are 1.3 cents per kWh, or 11 percent higher,” the report summary states.

Vermont’s RPF standards say that electric utilities since 2017 must be using 55 percent renewables; the next big checkpoint is 75 percent by 2032.

The study also finds that the cost of carbon mitigation per ton is much higher than previously thought.

“The estimated reduction in carbon emissions is imprecise, but, together with the price results, indicates that the cost per metric ton of CO2 abated exceeds $130 in all specifications and ranges up to $460, making it at least several times larger than conventional estimates of the social cost of carbon,” the report states.

Ishan Nath is a co-author of the study and a Ph.D. student in economics.

“Our findings suggest that RPS policies have raised electricity prices, perhaps more than had been believed,” he told True North in an email.

Nath explained that this study examines the net cost impact of RPS policies, but it does not get into the specific cost drivers.

The study comes as a top green activist organization in Vermont, the Vermont Public Interest Research Group, has put out a statement that Vermont is actually lagging well behind its green energy targets.

“While Vermont has made a commitment to reducing emissions by 26-28 percent below 2005 levels by 2025 [in line with the Paris Climate Accord] and transitioning to 90 percent renewable energy by 2050, there’s no way these goals can be achieved if we continue with business as usual,” they said.

Rep. Mark Higley, R-Lowell, is on the House Energy Committee.  He offered one suggestion on how RPS standards might be driving costs.

“One of the things that was puzzling to me was Green Mountain Power had been working with Renewable Energy Vermont regarding a charge per kilowatt hour for solar projects. They are also having an issue with transmission upgrades,” Higley said.

He said infrastructure upgrades are often required due to the intermittent nature of solar and wind power. That’s a cost that, ultimately, ratepayers have to pay.

“That was one of the things where being on the Energy and Technology Committee, we had those folks in there almost every day. I never heard once about a $75 a kilowatt charge to be reduced to a $37 or $35 charge that they agreed upon,” he said.

William Short is an energy consultant for New England who is based in New York City and he said the Chicago study’s results don’t surprise him.

Renewable energy credits are a type of financial derivative that allows utilities to invest in and take credit for green energy development without actually purchasing the energy outright. These are often used to help meet RPS goals.

He singled out other costs: “A third cost, and that’s probably a capacity cost, and that’s essentially the procurement of more than what would be otherwise the capacity values. And the fourth cost that it raises is the transmission cost.”

Short explained how states without any RPS programs are on average equal to the states using RPS programs in terms of carbon output reduction. The difference is they achieve this via the free market, usually involving more affordable natural gas energy, which emits about two-thirds less carbon than coal-based energy.

“It’s the fault of state government because you can’t tell me that the people in Alabama suddenly got tremendously brighter and more productive than the people in Maine,” he said.

Meanwhile big green energy projects like the Trombley Hill project in Morrisville are still celebrated as Vermont’s energy future with ribbon-cutting ceremonies. This one was announced on Twitter on June 20.

#TBT to the Trombley Hill Solar ribbon cutting event with @EncoreRenewable on Monday- and a huge thanks to Representative @PeterWelch for handling the big scissors! ✂️#solar #renewable #VT #vtpoli https://t.co/Eidap9Nc65 pic.twitter.com/DT8t4SXadO