A Progressive/Independent who ran unsuccessfully for U.S. Senate wants Democratic Rep.-elect Becca Balint to resign for benefiting from a pass-through campaign contribution of almost $1 million from a senior official at FTX, the scandal-ridden cryptocurrency firm.

“Who needs another alleged corrupt Democrat right now, when Republicans are taking over the U.S. House of Representatives,” Cris Ericson wrote December 13 in “The Smirking Chimp,” an online news and opinion platform claiming to offer “news and commentary from the vast left-wing conspiracy.”

“They’ll probably just impeach Becca Balint anyway, so why wait? Tell Becca Balint to resign now!,” Ericson wrote. Ericson has run for statewide office as a Progressive Party candidate, but ran as an independent in the November 8, 2022 General Election for U.S. Senator. She finished eighth with 1,105 votes. 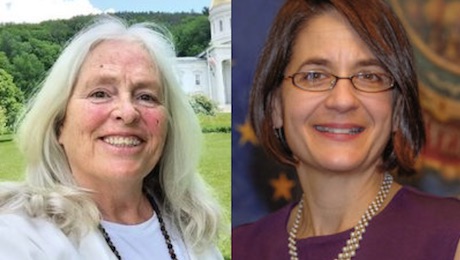 Cris Ericson, left, a 2022 candidate for U.S. Senate, says House Republicans will probably impeach Balint over her connection to the FTX scandal.

At issue is a $1.1 million contribution from Nishad Singh, a senior executive at FTX, the now-bankrupt cryptocurrency firm that was a major donor to Democratic campaigns as it sought to influence looming government regulations of cryptocurrency and the rest of the digital economy.

On July 7, Singh donated $1.1 million to the LGBTQ Victory Fund. In its policy blog, FTX praises three current digital currency regulation legislative initiatives: “FTX is enthused about these developments because they indicate the broadening interest from the Congress in providing protections for investors in digital assets as well as regulatory clarity to the industry as whole.”

The next largest donor to the Victory fund gave $10,000. The PAC then spent $991,000 on the Balint campaign. Simple arithmetic shows that the LGBTQ Victory Fund was just a pass-through from Singh to Balint’s benefit. In the final month before the August 9 primary, a plethora of mailers and advertising helped a surging Balint pummel Lt. Gov. Molly Gray.

Balint returned a $2900 donation from the founder of FTX but apparently has no plans to make amends for the $991,000 spent on her campaign’s behalf by another PAC.

Balint said in a Sept. 15 candidate forum she had no control over the contribution, and that in fact, she didn’t want it: “I want to really assure vermonters that I had absolutely no knowledge of who is donating money to the Victory Fund which is an LGBTQ organization. I did not want that investment in my campaign. I had no control over it. And the things I did have control over was how I ran my campaign, which was with many, many small dollar donors.”

Yet Balint’s campaign policy goals closely resembled those of the Protect Our Futures PAC established by the founder of FTX.

POF PAC website: “We must establish independent oversight of dual-use research including enforcement mechanisms to ensure safety and security.

This was simply Balint parroting for profit, Republican nominee Liam Madden claimed in a campaign op-ed. “This policy is something that was inconvenient to support before. It was politically expensive, so Balint hadn’t the courage to breathe a peep about it—until it paid,” he said.