BARRE — With a veto-proof majority, Democrats aim to take another crack at a clean heat bill and make climate issues their first priority next year in the State House.

That was one of the key takeaways from a Monday night forum hosted by Vermont Public Interest Research Group at the Old Labor Hall.

“Leadership prioritizes climate now more than ever,” said state Senator-Elect Rebecca White, one of the speakers. White told the crowd that she had met with Senate President Pro Tempore Phil Baruth, who told her his top legislative priority is climate policy. 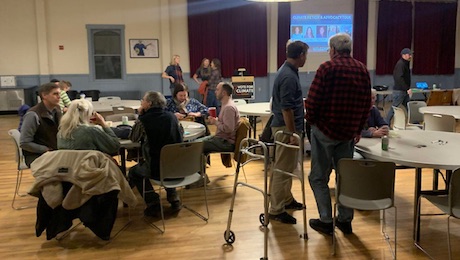 Legislators and event attendees mingle before a forum on climate policy goals organized by the Vermont Public Interest Research Group.

White was one of five current or soon-to-be lawmakers who spoke at the event and met with the about two dozen attendees, including a few local faces: Anne Watson, state senator-elect and Montpelier mayor; Jonathan Williams, state representative-elect; and recently reelected Sen. Andrew Perchlik, D/P-Washington.

The event was a part of a statewide 12-stop climate tour in which politicians and attendees can discuss legislative issues centered on climate change. Meeting the state’s legally required carbon emissions targets has been a focal point of the tour, and event organizers have also looked to connect locals with their representatives to urge action.

All the tour events have been co-led by the advocacy group’s climate campaign manager Jordan Heiden and White, who will represent the Windsor Senate district.

“If I had to guess, in the House they will likely start on making rules to the renewable energy standard, while in the Senate the clean and affordable heat standard (might be first),” White said

Earlier this year, environmental activists expressed disappointment to Vermont Public about Republican Gov. Phil Scott’s veto of last legislative session’s landmark heating reform bill. That bill was projected to account for a third of the state’s legally required emissions reductions by 2030, according to the research nonprofit Energy Action Network.

House legislators failed to override the governor’s veto by a single vote.

Longtime Sen. Mark MacDonald, D-Orange, promised attendees that night the Senate would try again to pass a clean heating bill. White and Heiden went further, saying they were optimistic a new bill would pass after the lessons learned from the May veto situation.

The tour began in Hartford on Nov. 28, then stopped in Bennington and St. Johnsbury before hitting Barre. Eight more stops are planned throughout the state in the coming weeks, including one in Burlington (Dec. 8) and one in Rutland (Dec. 9). When complete, the tour will have featured 12 events with several dozen officials in just over three weeks.

The tour is a part of a broader VPIRG campaign that began this past March — the Keep Vermont Cool Campaign — to motivate legislators to act on particular climate change legislation.

The event was filled with optimism, largely due to the midterms last month in which Vermont Democrats gained a veto-proof majority

But it wasn’t all cheerful, as presenters said Vermont has a shrinking window to take legislative action. They expressed concern about a vocal minority in the state that is doubtful or dismissive of climate change as a problem.

At one point, White did not mince words about those neglecting climate change’s impact: “It feels like gaslighting when people are not caring about (the) climate crisis.”

Apart from the heating bill, speakers touched on topics like subsidizing electrification, adopting heating alternatives and how to do so in an equitable manner.

Williams detailed how funding needs to be more equitable across the state, pointing out how Barre City might need more money compared to wealthier municipalities such as those in Chittenden County.

The tour caps off an election season in which VPIRG says it spent more than $235,000 on “pro-climate candidates,” resulting in more than 120 “climate champions” being elected.

14 thoughts on “Climate tour makes a stop in Barre”