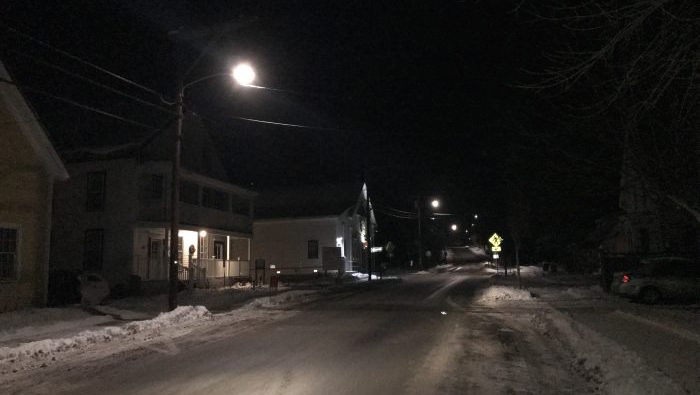 They’re bright, they’re saving municipalities money and they’re popular for communities looking to jump on the energy efficiency bandwagon. But one professor says LED street lights can be harmful to people and animals.

Street lights with LED (light-emitting diodes) technology have been appearing across rural and urban communities in recent years as municipalities have moved to replace orange-colored sodium gas lights from the prior generation.

While select boards in Vermont have embraced the trend, Richard Stevens, University of Connecticut professor of community medicine and health care, says it’s time to hit the brakes and assess if embracing LEDs is smart policy from a public health perspective.

“The simple part is, with electric light in the night, it changes our physiology depending on how bright it is,” Stevens told True North. “The thing that has gotten many of us so exorcised about this is that there has been no environmental impact statement on the effect of lighting the night with these high-intensity bulbs.”

Stevens is not alone in this assessment. The American Medical Society issued guidance to reduce harm from the street lights in 2016.

“Despite the energy efficiency benefits, some LED lights are harmful when used as street lighting. The new AMA guidance encourages proper attention to optimal design and engineering features when converting to LED lighting that minimize detrimental health and environmental effects,” AMA Board Member Maya A. Babu said in a statement announcing the guidelines.

Stevens said LEDs are OK at low intensity, but not the ones commonly seen on public streets.

“Bulbs can be created that have any color combination that you want,” he said. “What the government, the DOE [Department of Energy] and the industry has chosen, however, are extremely harsh, bright, and high-blue content LEDs, which are awful for the environment, and to the extent that we see them, they are awful for us.”

One of the negative impacts on humans, Stevens says, is the suppression of melatonin, a chemical in the body that promotes healthy sleep. Our body’s sleep cycle is often referred to in scientific terms as the circadian rhythm.

While LED street lighting may appear white to the human eye, it actually contains a high percentage of blue from the color spectrum. Stevens said this can cause circadian disruption in humans and wildlife alike.

He said the use of the blue-LEDs has to do with its efficiency and adaptability, since engineers can create a variety of colors using a blue LED. However, the AMA says the technology can be dangerous for people driving at night.

Another problem occurs if municipalities install too many of the lights.

“What’s happening with the LED street lighting, we’re now learning, is that municipalities are way over-lighting. So they’re taking the savings [gained from lower energy use] and putting it back into more lighting, which is bad for everything.”

Kristin Carlson, spokeswoman and vice president of strategic and external affairs for Green Mountain Power, told True North that “GMP does promote use of the technology under the consideration of much research and community dialogue.”

“We work in strong partnership with communities,” she said.

She said GMP works with the International Dark-Sky Society when making street light recommendations, and the utility advocates “only fixtures with no light pollution” that aim light downwards, limiting emissions to the surrounding environment.

In 2011, Green Mountain Power partnered with Efficiency Vermont in an effort to get every town in GMP’s service territory to switch to LED street lights.

“Last year Green Mountain Power became one of only a handful of utilities in the country to offer an LED-specific rate to customers for outdoor lighting. This year we are taking it a step further by proposing to lower the rate and offer financial assistance to towns to change to LED lights,” GMP CEO Mary Powell said at the time.

GMP sought to use $300,000 from the GMP Efficiency Fund to help municipalities make the changeover and filed “a new tariff for LED street lights that will lower the cost towns pay for leasing street lights,” a company press release states.

Efficiency Vermont’s Jeff Buell responded to True North that their organization is well aware of the published materials concerning negative impacts of LEDs and that they follow strict guidelines to “balance the potential circadian rhythm impacts against the potential public safety impacts.”

A spokesperson for the Public Utilities Commission told True North that PUC does not have a role in the selection of street lighting in the state.