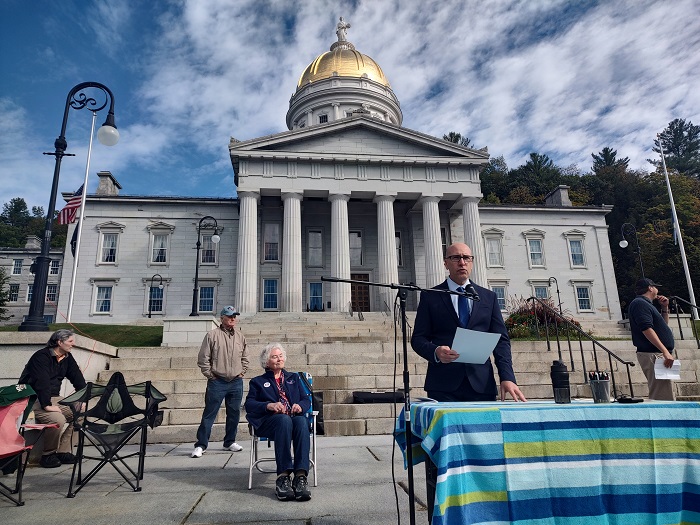 LEARN THE CONSTITUTION: Professor Jason Jagemann from Norwich University’s political science program said Americans understand what makes the United States a constitutional  republic — if they hope to keep it that way.

MONTPELIER, Vt. — A handful of patriotic speakers met at the Statehouse on Constitution Day and shared why Vermonters need to understand and value the document that forms the basis for our nation’s laws.

“The Constitution has been under assault for a number of years, and there are things going on right here in Vermont on our own state constitution,” Gregory Thayer, a former GOP candidate for Lieutenant Governor, said Saturday at the event.

Thayer was one of the primary organizers of this event, along with Linda Kirker, a former state representative and the co-founder and president of American Conservative Women.

Jason Jagemann, a professor from Norwich University’s political science program, was the keynote speaker. He spoke about the importance of the U.S. Constitution and noted that too few Americans know much about it.

“While the United States is the oldest modern living democracy/republic, the paucity of civic knowledge in the United States is nothing short of gobsmacking,” he said. “According to a recent Woodrow Wilson Foundation poll, only one in three Americans, about 36%, can actually pass a multiple choice test consisting of items from the U.S. citizenship test, which has a passing score of 60%.”

Jagemann added that more than half of Americans don’t know which nations fought in World War I, and just one in five understand the reasons why the colonists fought the British during the Revolutionary War.

“Knowledge about the Constitution is not passed down genetically,” he said. “We have to be vigilant, we have to learn it — and it must be learned anew by each generation, and it’s not simply enough to read and memorize the Constitution. Instead we should try to get the ideas and understand them.”

He offered a brief history lesson on some of the problems with the initial U.S. federal government, which existed for 12 years before the Constitution was written and ratified.

“The Articles of Confederation was set up as the structure of the United States government , Jagemann said, “but it was extremely weak and plagued with a number of collective action problems.

“There was no separation of powers, there was only a unicameral legislature (one chamber of lawmakers), there was a weak central government where the states had much power, it was after all a confederation.”

Jagemann said these circumstances made basic government functions, such as the collecting of public funds for services or the payments of foreign debts, more difficult without these further revisions.

Jagemann also quoted from that era U.S. Senator Robert Bird, a Democrat from West Virginia who said, “The United States will survive and flourish as long as we know our nation’s history and so long as we defend the Constitution and what it stands for. One will not protect what one does not value.”

Gerald Malloy, a Republican running for U.S. Senate, made a brief appearance at the podium and said, “We’ve gotten away from this, and that’s one of the reasons I’m running.”

Another speaker, Jarrod Sammis from Castleton, a candidate for the Vermont House to represent the Rutland-3 district, noted that the Bill of Rights (the first 10 amendments to the Constitution) was “created after a multi-decade struggle against an empire for freedom.” He went on to share in the reading the document, along with other participants taking turns.

Kirker offered encouraging words to attendees who showed interest in the Constitution.

“Don’t give up, keep your spirit, let your patriotism be known,” she said. “We owe it to our youth.”

Kirker added: “I’ve got three great-grandchildren and I’m concerned for their future in this country. I want all to be able to ensure that we’re going to leave behind a great opportunity of patriotism and love of country and respect and freedom, rights, and opportunities for our youth.”