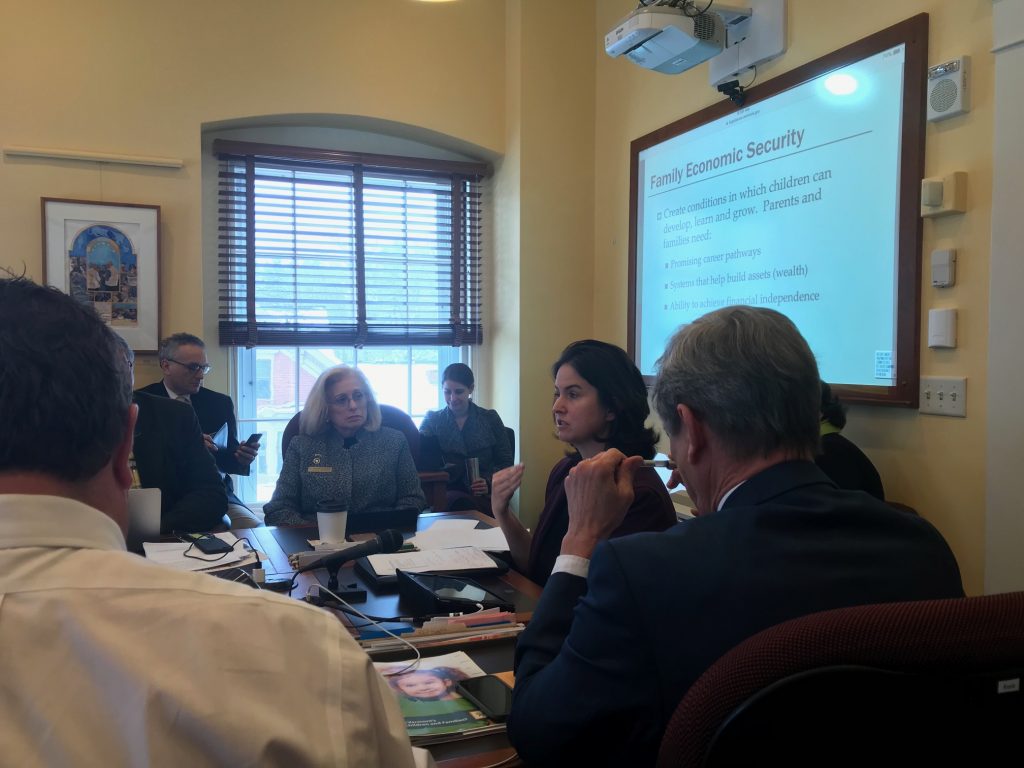 TOO MUCH POVERTY: Sarah Phillips, director of the Office of Economic Opportunity for the Department for Children and Families, talks to the House Human Services Committee about the state of child poverty in Vermont.

MONTPELIER, Vt. — The Vermont Poverty Council began ten years ago and its tenure is up. Now it faces a crossroads, and lawmakers must decide if it has a future, and what that future might be.

In a conversation at the House Human Services Committee on Thursday, Legislative Counsel Katie McLinn said the task for the council on poverty has been to give recommendations to legislators and the administration on how to improve conditions regarding childhood poverty.

In many cases, such recommendations mean taxpayers will need to pay for additional expanded social programs.

“You can see here the list of recommendations: expanding 3Squares eligibility, expanding seasonal fuel benefits, expanding Reach Up eligibility, reforming health insurance, among others,” said Paul Dragon, director of policy and program integration for the Agency of Human Services.”

More stats delivered to the committee include 30 percent of families with children have a “high housing cost burden,” which means a third or more of total income is spent on housing costs. Regarding older children, 11.6 percent of 12 to 24-year-olds are not in school or employed.

Some 38.1 percent of families with children have “no emergency savings,” Phillips added.

This number caught the attention of Rep. Joseph Troiano, D-Stannard.

“I’m a person that’s poverty-stricken and I’m OK with that,” he said. “I’m doing alright, I’m getting food, I’m getting shelter, I’m getting all these things so I’m not gonna go to work.

“That’s a tough thing for me to say, but I know from personal experience,” he told the committee.

McFaun said he has spent most of his professional life working on helping those who struggle to get back on their feet.

Phillips answered that there are a variety of reasons why people on these programs might not work.

As far as those who might simply be complacent, she said that’s difficult to measure.

“I think there’s some complexity in what you are asking, that I’m not sure an indicator or a percentage point can get at,” she said. “ … I might disagree with you that those people are necessarily satisfied with their level of wealth or where they are in terms of own economic security.”

Troiano suggested the Council’s criterion for determining poverty might be lacking.

“Hunger Free Vermont cites transportation as an issue that is above both housing and food costs on a monthly basis for a family of three,” he said. “I don’t see it addressed in here — Is there a reason for that?”

“I think it limits us from perhaps bringing it to the table, but absolutely I would echo that need,” she said.

Doug Racine, a former Vermont Secretary of Human Services, former state senator, and former lieutenant governor, told the committee that he’s worked closely with this council. He talked about the dangers of the benefits cliff.

“I didn’t realize the problems of the benefits cliff until I listened to a couple of single moms who were working — they were playing by the rules, they were doing what we expect them to do,” he said. “Working really hard, getting more hours, getting a raise, and all of the sudden they fall off that benefit cliff of childcare assistance.”

He went on to call it a “powerful disincentive for those folks to get ahead.”

Racine also reminded that while for some poverty means struggling with various expenses, for others it is more serious yet. He recalled one discussion he had with some single moms in Burlington.

“I was there saying, ‘Have you thought about getting a diploma, or a GED, or a community college,’ and they said, ‘Timeout. I don’t know where my kids are sleeping tomorrow night. We’re at a shelter tonight.’ For them, it was, ‘How can you talk about the middle-class issues relating to poverty when I’m working on survival?'”