Portland Mayor Ted Wheeler is moving out of his home after rioters descended on the Democrat’s $800,000 condo Monday, setting fires and breaking windows, according to a Tuesday report.

Wheeler sent an email Tuesday to other residents in his high-rise condo saying that finding a different home would be “best for me and for everyone else’s safety and peace,” according to The Oregonian. Portlanders have experienced daily riots since the death of George Floyd, who died in May after a police officer kneeled on his neck for several minutes, video of the incident shows. 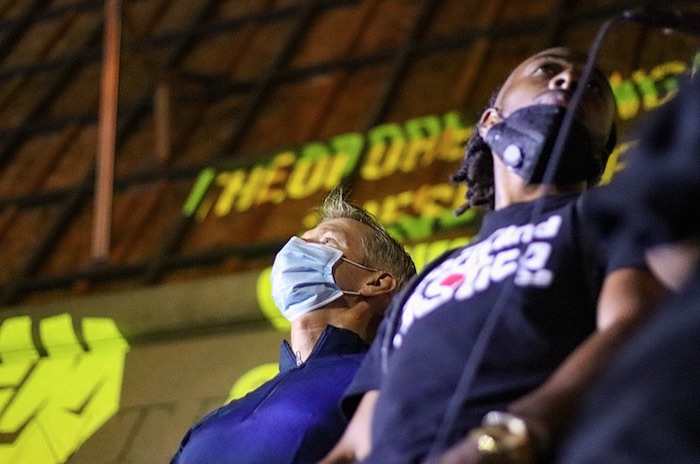 “I want to express my sincere apologies for the damage to our home and the fear that you are experiencing due to my position,” Wheeler, a Democrat, wrote in the email, a screenshot obtained by The Oregonian shows. “It’s unfair to all of you who have no role in politics or in my administration.”

On Monday, some rioters graffitied and damaged his building, and tossed a burning pile of newspapers into retail space in the building, The Oregonian noted. Police arrested 19 people.

Wheeler has faced increased criticism due to the daily violent riots, with President Donald Trump calling him a “joke” for rejecting the president’s request to provide federal help to quail the violence.

“Portland is a mess, and it has been for many years. If this joke of a mayor doesn’t clean it up, we will go in and do it for them!” the president said in an Aug. 31 tweet.

Trump’s comments came after one man was shot and killed in the street on Saturday in Portland.

Wheeler rejected Trump’s offer on Aug. 22 to send federal assistance, according to an official statement.

“We don’t need your politics of division and demagoguery. Portlanders are onto you. We have already seen your reckless disregard for human life in your bumbling response to the COVID pandemic. And we know you’ve reached the conclusion that images of violence or vandalism are your only ticket to reelection,” the mayor’s Aug. 28 statement read.

2 thoughts on “Portland, Oregon Mayor Ted Wheeler is moving out of his $800K condo after rioters ransack his home”