A RealClear Opinion Research poll of 2,020 registered voters in August saw a 10-point increase in support of school choice policies since its last poll in April, from 67 percent to 77 percent.

The American Federation for Children describes school choice as the right for parents to use the tax dollars designated for their child’s education in a school of their choice. The tax dollars would follow the child, not be tied to a nearby school system. Funding could be used for public, private, charter, or homeschool education, whichever method the parents believes provides the best learning environment for their child. 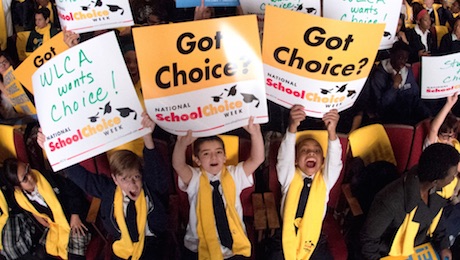 “This polling data shows one of the most astounding short-term jumps in support for educational choice policies,” John Schilling, president of the American Federation of Children, said. “Clearly, families are incredibly frustrated at the district schools’ response to this crisis and are tired of the months and months of fumbles. … families are desperate for other options and will support governors and other policymakers as they pursue policies that let them control their child’s education funding.”

Respondents across racial and political lines expressed overwhelming support for school choice, including: 69 percent of Blacks, 70 percent of Latinos, 63 percent of Democrats and 79 percent of Republicans.

As state shutdowns continue and parents look for alternative methods to educate their children, 80 percent of public school parents (72 percent of Democrats, 76 percent of Republicans, and 73 percent of Independents) said they would support the state government giving them a portion of the money allocated for public school to use for home, virtual, or private learning if public schools did not reopen for in-person instruction.

An overwhelming majority of respondents polled by RealClear Opinion in April and by Beck Research in January support the Education Freedom Scholarship. The scholarship works through a federal tax credit that allows individuals and businesses to donate to in-state non-profit scholarship granting organizations that provide scholarships for students to attend public, private or career and technical schools of their choice.