Inflation has continued to rise in the last year, and new polling shows the majority of Americans blame Democratic policies for the growing problem.

Even 41% of Democratic voters report that Biden’s policies are the cause of inflation. 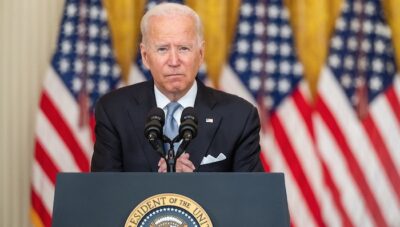 The rising costs of goods have become thorn in the side of many Democrats, though the Biden administration has said the inflation will be “transitory.”

“Sixty-two percent of voters blame the Biden administration’s policies for rising inflation, an increase of 3 percentage points from late July, when Morning Consult and Politico last polled on the question,” the survey said. “Slight increases in the shares of Republicans (85 percent) and independents (61 percent) who hold the administration responsible fueled the uptick. About half of voters (48 percent) believe Americans’ return to pre-pandemic behaviors has contributed to the 13-year high in inflation, a 5-point decline from July.”

Inflation means higher prices on all kinds of goods and services for Americans, from electricity to gasoline to food and rent.

Federal economic data has shown inflation steadily rising, with much of that rise taking place during Biden’s term.

The Bureau of Economic Analysis released data earlier this month on personal consumption expenditures (PCE), a leading marker of inflation. Those figures showed the fastest increase in inflation in 30 years.

International markets are taking notice. The Organisation for Economic Cooperation and Development recently released its global economic analysis and significantly reduced growth predictions for the U.S., from 6.9% to 6% for 2021. In their analysis, one key reason for the downgrade was rising inflation.

“Inflation has risen sharply in the United States, Canada, the United Kingdom and some emerging-market economies, but remains relatively low in many other advanced economies, particularly in Europe and Asia,” the report said. “G20 consumer price inflation is projected to moderate from 4½ per cent at the end of 2021 to around 3½ per cent by the end of 2022, remaining above the rates seen prior to the pandemic. Supply pressures should fade gradually, wage growth remains moderate and inflation expectations are still anchored, but near-term risks are on the upside.”

The rising costs of goods have become thorn in the side of many Democrats, though the Biden administration has said the inflation will be “transitory.”

U.S. Sen. Joe Manchin, D-W.V., has cited concerns over inflation as a key reason for his refusal to support the $3.5 trillion reconciliation bill pushed by the White House.

“Now Democratic congressional leaders propose to pass the largest single spending bill in history with no regard to rising inflation, crippling debt or the inevitability of future crises,” Manchin said in a September opinion piece in the Wall Street Journal.

“Instead of rushing to spend trillions on new government programs and additional stimulus funding, Congress should hit a strategic pause on the budget-reconciliation legislation,” he added. “A pause is warranted because it will provide more clarity on the trajectory of the pandemic, and it will allow us to determine whether inflation is transitory or not.”