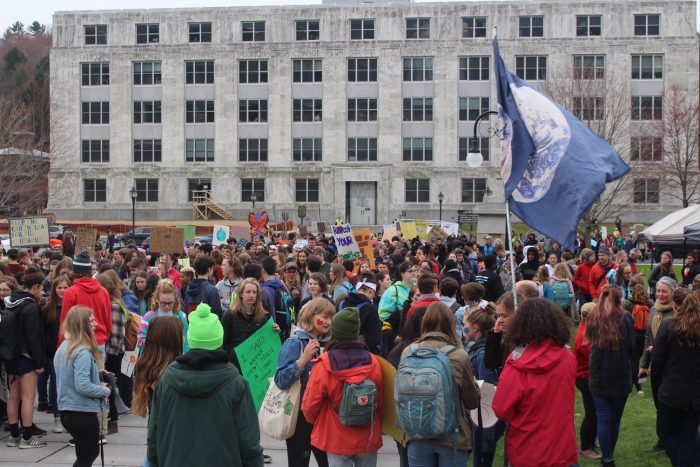 Many students who spoke at the May 1, 2019, Youth Lobby rally in Montpelier said fear is what motivates them to demand immediate action on global warming.

A month or so ago several national media outlets covered a study about spiking teen suicide rates. And not just suicide:

The problem is particularly acute in Vermont, where our young people die by suicide at one of the highest rates in the country. So, here is a question: Is politicizing (politically weaponizing) our kids causing them serious psychological damage?

We are taking these immature, trusting, malleable young people and bombarding them every day with messages like, “If we don’t pass a carbon tax and all start driving electric cars within the next decade it will lead to — in the words of one Vermont Representative — ‘planetary collapse.’” Grab a poster, skip school, and we’ll put your picture on the front page of the paper.

Of course, death by climate change is really a moot point because well before those 10 years pass you’ll probably be shot in your school cafeteria by a lunatic with an AR-15, so you better skip class again, grab a sign and start calling for the repeal of the Second Amendment. Do that and we’ll put you on the cover of Time Magazine!

If you do somehow manage to survive, remember that everything in your life, macro or micro, is driven by racism, homophobia, xenophobia, white privilege, toxic masculinity, patriarchy, cultural appropriation, and who knows what other insidious forces of social injustice lurking behind that stranger’s smiling wave and wish for a Merry Christmas.

You are either an irredeemable, deplorable oppressor or the helpless victim of such oppressors, neither of which is a particularly appealing or self-affirming position to be in.

The kids aren’t coming up with stuff on their own. They are being manipulated by teachers, special interest groups and politicians, and often encouraged by their parents. Honestly, do you really think the middle- and high-school students marching on the Statehouse for climate change came up with their list of demands on their own? “Double the number of low- and moderate-income homes weatherized annually.” “Expand local renewable power and electrification of heating and transportation sectors.” “Prohibit the expansion of fossil fuel infrastructure.” “Act on the Joint Fiscal Office’s carbon pricing study.”

With that last one, all plausible deniability went out the window. Do any of these kids know what the Joint Fiscal Office is, let alone did they read that study? Yet we are supposed to believe this is what they came up with while hanging out on the bleachers during recess? No, this is a list of special interest group priorities, and the kids are being exploited as a prop. That’s not healthy.

The social contract the adults are writing for young people today is one in which to receive positive recognition and social advancement you must continuously digest and regurgitate the most dystopian possibilities for your future on a planet populated by vile people embroiled in insurmountable, cataclysmic, environmental and moral crises. That’s awful enough, but if you dare deny this bleak view and believe in a world where things are pretty good and getting better, you risk being ridiculed, ostracized and exiled. Can you imagine a more cruel emotional bind or a more potent recipe for creating anxiety, stress and depression in a young, developing human being?

Let’s be honest with our kids — the world we live in is not the apocalyptic nightmare some would have you believe. The truth is we are lucky to be living in the least violent, most abundant, healthy, wealthy, peaceful time in human history. There are plenty of reasons to be optimistic. One of the safest places you will ever be is in your school, and, to quote Rep. Alexandria Ocasio-Cortez, “Like the ‘world ending in 12 years’ thing, you’d have to have the social intelligence of a sea sponge to think it’s literal.”

Is our world perfect? No. Is there work to do to make things even better than they are today? Of course. But, as the adults here it’s our responsibility to fix these problems, not yours. Not yet. Our other job is to prepare you be well equipped, well adjusted, productive citizens for when you do become adults and assume the responsibilities of running the world. Poisoning your adolescent years with perpetual fear, anger, paranoia and hopelessness while using you as front line cannon fodder in our petty political fights is not the way to achieve those goals.

17 thoughts on “Roper: Politicizing our kids and rising suicide rates”