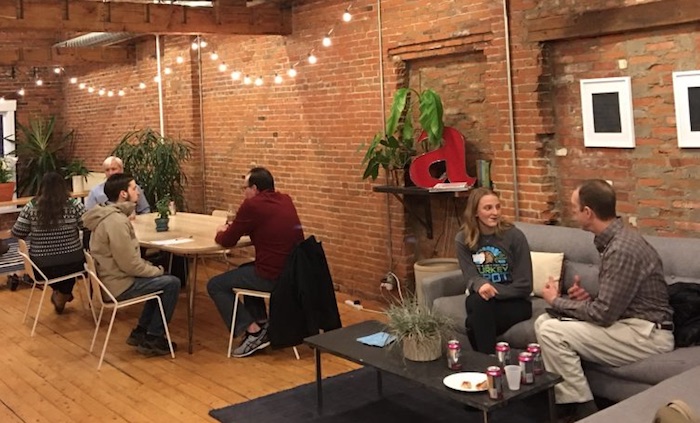 CIVIL DISCOURSE: Conservatives and liberals sat down together in Burlington last week for a political discussion on guns. Things were civil despite the hot topic.

BURLINGTON — Conservatives and liberals came together last Thursday evening at the Study Hall in Burlington for a “thought exchange” experiment in civil conversation.

The event, sponsored by True North Reports, consisted of folks with opposing views pairing off and chatting for seven minutes before switching up and then doing it again. Participants did five sessions in an hour, and each person graded his or her dialogue partners on how well they listened and contributed to understanding their viewpoints, even though they may have disagreed.

The topic of the evening was guns, a highly divisive issue since Gov. Phil Scott signed S.55 and other gun measures pertaining to universal background checks, magazine ammo capacity limits, and more.

Asher Crispe, executive director of Vermont Future Now and moderator for the night, said he noticed various communication patterns that emerged throughout the session.

“If you are too adversarial, sometimes then people might shut down and don’t want to talk and share their view, because it might be unpopular or they might feel attacked for it,” he said. “And if you are too nice, people also don’t want to tell you their real view and they bottle up.”

Megan Oates, a UVM student, said the experiment was positive.

“It’s interesting to talk with people who are parents and who are in the workforce and have already gone through school and college, that are just living from different points of view as I am.”

Dan Feliciano, of Essex, received the highest average score among all the participants. He told True North his approach to each conversation was to focus on understanding.

“It’s very easy to get trapped in a regurgitation of your own views through [social media] like Facebook and through living in proximity to other students,” she said. “[With] Face to face in an argument, there’s no computer screen to hide behind, [and] there’s no time in a normal conversation to go through your thoughts and organize them and structure them in a sentence.

“It’s a very raw and natural way of learning about other people’s opinions, and I felt like I learned a lot,” she said.

Another UVM student, Jack Cahalane, said most political discussions are taking place “through impersonal media,” and that the medium “changes how people say things” relative to how they might communicate in person.

“I think this is a great way to get people to engage in conversation instead of yelling at each other and get mad about things,” she said. “It’s awesome to just hear other people’s perspective in a calm and collected way, and I think I learned a lot just from people not yelling at me and kind of talking to me in a way that I can understand and they listened to me too.”

After the event, Crispe said he plans to edit the film footage shot at the event and publish it on social media to attract participants for future discussions of controversial topics.