It would be an understatement to say that polite political conversation is at an all time low in the United States. The last time political differences were so extreme in our republic were just prior to the outbreak of the Civil War in 1861. Then, as we know, all hell broke loose on American soil. 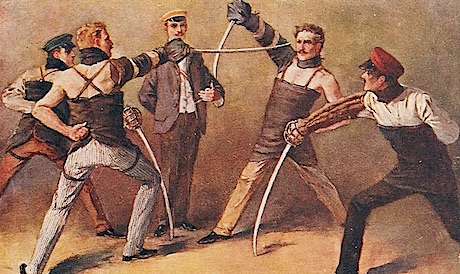 In this painting by Georg Mühlberg, two members of student fraternities in Germany fight a sabre duel, which was a forbidden practice involving deadly weapons that continued to about 1935.

I keep searching for some common ground between the factions of left and right, Democrats and Republicans. While listening to conversations originating from the most extreme sides of the political spectrum I have found two common denominators that unite average Americans and Vermonters. These beliefs in common could bring some fresh oxygen into the room.

The first thing we all seem to have in common is the desire for term limits. The base of each party, the average Joe or Jane, appear to agree that the power structures created by career politicians do nothing for the economic or political health of the nation. The career politicians and the leadership of each party want nothing to do with a constitutional amendment requiring term limits. Why would they? Term limits threaten their accumulated wealth and immense power. Term limits would restrain their ability to fleece the taxpayer and violate the people’s liberty.

The second thing that the base of each party has in common is its disgust with crony capitalism. Crony capitalism (not to be confused with free-market capitalism) is when special interest groups — labor unions included — lobby politicians for favors. These favors include tax incentives, government subsidies and any other allowances that benefit the private interest or emolument of any one man or woman, family or class of men or women. The list of failures when politicians pick winners and losers in an economy is long. The biggest losers are always taxpayers and consumers. Crony capitalism drives up costs, reduces quality of products and stifles innovation all at the same time emptying the pockets of the citizen.

The authors of the original Vermont Constitution, way back in 1777, were well aware of the negative effects of taxpayer-funded favors. So much so that they wrote Article 6 of that document as a prohibition against crony capitialism. It reads: “That government is, or ought to be, instituted for the common benefit, protection, and security of the people, nation or community; and not for the particular emolument or advantage of any single man, family or set of men, who are a part only of that community; and that the community hath an indubitable, unalienable and indefeasible right to reform, alter, or abolish, government, in such manner as shall be, by that community, judged most conducive to the public weal.”

Any Vermonter who is paying attention to the political skulduggery in Montpelier knows that Article 6 is completely ignored. Having mingled with many Vermont politicians I have found that most of them have never even read our constitution. The New Hampshire constitution has a similar clause. The politicians on that side of the river have set a precedent by actually adhering to the clause. This appears to greatly benefit the political culture and economy of that state.

Despite the present hostilities between factions in Vermont and the larger nation, I am hopeful that the people will take a breath and start to demand structural changes that could be made to reign in the excesses and abuses of the politicians that represent us.

5 thoughts on “Lindberg: Polite political conversation is at an all time low”