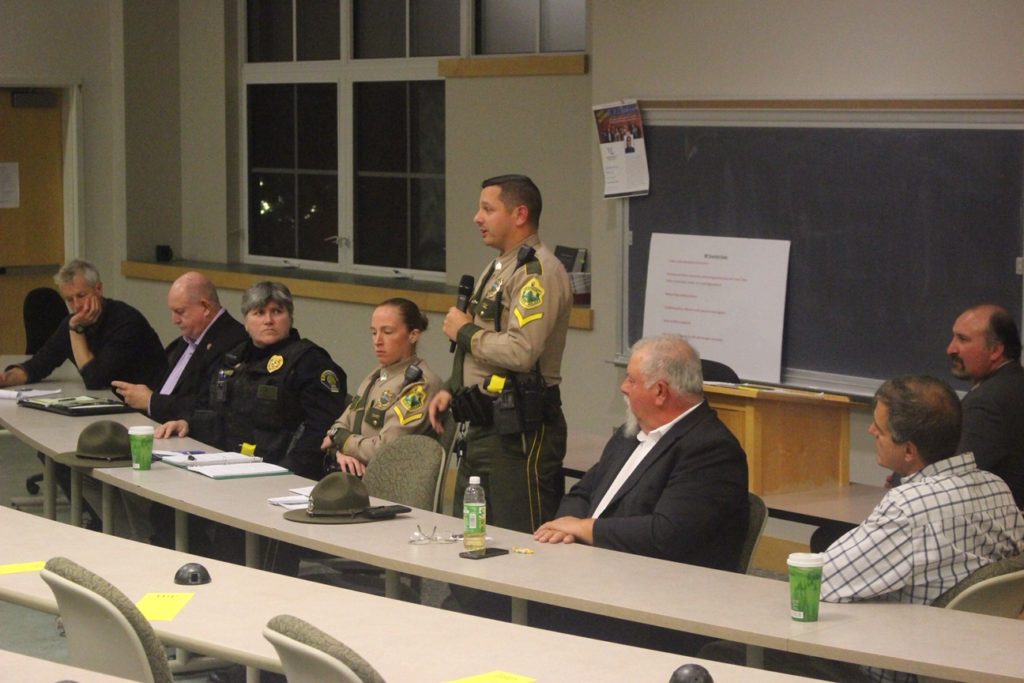 SOUTH ROYALTON — Various police and community leaders gathered in a campus hall at Vermont Law School on Wednesday evening to discuss the general lack of resources and other issues facing law enforcement in the Green Mountain State.

Regular meetings over Intelligence Based Policing have been ongoing for several months. The goal of the policing strategy is to bring the police into regular contact with communities, and to get local professionals to work together. This is especially important when resources are spread thin.

Dana Colson, of South Royalton, was the moderator. Colson does not have a specific law enforcement background, but he has been involved in policing matters since his son, Austin Colson, went missing in early 2018.

Colson says the police have one person of interest in the case who was working with his son on the morning he disappeared. Colson says the man has a spotty record and had transferred from a secure federal prison to a rehabilitation center, where he stayed for one week before getting back on the streets.

“I don’t think that did much good for anybody,” Colson said at the meeting.

He gave another example — a man who just spent one hour in rehab before stealing a car, kidnapping a woman and her child, and raping the woman before finally getting caught in Pennsylvania.

“They basically used [rehab] as a get-out-of-jail-free card,” he said.

Colson said Vermont needs a rehabilitation center for addicts that has security comparable to the prisons they are being transferred from.

Another discussion at the meeting was the lack of officers in Vermont, including too few recruits in training. One officer stated that the media portrays police in such a negative light that it has begun affecting the ability to recruit.

State’s Attorney Will Porter said most of Vermont’s barracks are short-handed.

“I think every single state police barracks in the state of Vermont is short,” he said. “I handle all of the cases that come out of the Royalton State Police Barracks, and that barracks, I believe, has been short-staffed for almost three or four years straight.”

It’s not just the officers that are limited; the court system is also backlogged. State’s Attorney Ward Goodenough said that the waiting times are getting troublesome.

“Some counties have court more often than others,” he said. “Some counties have more prosecutors and defense attorneys. There are different stress points in that system, but there is a delay in every county in Vermont when it comes to how quickly it can be heard,” he said.

“When you talk about drug trafficking in Vermont, the Sheriff’s Department and the municipals [police departments], the resources aren’t there,” he said.

He added the state almost lost $2 million dollars in federal money because Vermont has been getting too liberal on immigration. He said it wasn’t until a letter to the feds was modified at the last minute that Vermont was able to take the money.

Sheriff Bohnyak said law enforcement officers need to be able to find out who the illegal immigrants are, and to take the steps necessary to keep Vermont safe.

“We should be doing our jobs and helping our federal partners with the illegal immigration part,” he said.

The federal government this past year has threatened to deny millions in federal grant money over Vermont’s growing status as a sanctuary state. In 2017, Gov. Phil Scott signed immigration bill S.79, which makes it illegal for state officials to share residents’ personally identifiable information — including immigration status, national origin, religion, race and color —  with federal agencies.

Klar, who recently announced his candidacy for governor, talked about how Vermont’s soft approach to crime is helping hard drugs come in from out of state.

“This is an invitation to the wrong element,” he said. “This is like green pastures to cows.”

Klar took issue with the notion that police are pulling over drivers because of their race.

“I’ve talked to some of the police and they’ve told me they’re not racist,” he said. “They said ‘if you are speeding, then I will pull you over.'”

The meeting covered a handful of other subjects, including the new LEAD (Law Enforcement Against Drugs ) program for schools, which is a more science-based successor to the DARE (Drug Abuse Resistance Education) program of past years.

There was also discussion on what is required to convict someone of a crime, and why it’s always important to share tips with law enforcement, even if it must be done anonymously.

17 thoughts on “Police meeting discusses the lack of personnel, resources to get job done in Vermont”