Vermont Secretary of Education Daniel French wants a change in state law to allow funding of school districts this year based on last year’s pre-pandemic enrollment, he said in an Aug. 24 recommendation to the Legislature.

“Ensuring districts receive at least the same ADM [Average Daily Membership] count as last year would promote some measure of stability in the district budgeting process during the emergency period,” French wrote (see full text below).

Friday, the House Education Committee discussed addressing the financial implications of declining public school enrollment due to homeschooling, which is up an estimated 75% this year as parents withdraw children due (mostly) to Covid-19-related concerns. As of mid-July the total number of homeschooling applicants was 1,600. The current number is unknown. 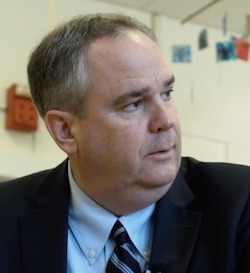 Private schools also report full enrollment and increased inquiries from Vermont parents. In general, Vermont private schools will follow the same health and safety protocols, but are likely to hold more in-person instruction and are not suffering from staffing shortages.

The exodus from the public schools to homeschooling and private schools is a particular problem for public school finances. State law at present allocates funding to school districts on an “Average Daily Membership (ADM).” Declining ADM means less money for a district, even while fixed costs remain and districts face added costs of adhering to Covid-19 guidelines.

French also urged for the 2020-21 school year that the Legislature subtract five days of student instruction and add five days of teacher in-service, and require all school district voting to be held by Australian ballot.

“This … is really an effort in my mind to bring as much normalcy to the process of education as possible,” Jeff Francis, executive director of the Vermont Superintendents Association told the committees. “We do know that homeschooling families are way up….some students won’t come because families have made other choices.” 80% of superintendents expressed concern about losing funding if the current ADM system is used, he said.

Homeschoolers may participate in some school activities, such as sports, and some classes. School districts are not obligated to provide special education to homeschoolers, the committees were told. There was no specific discussion by Francis or French regarding on added funding for the larger number of homeschoolers, especially first-time parents and students unfamiliar with curriculum, IT needs, available resources, etc.. No homeschooling advocates were on the meeting agenda.

I have worked with my team to identify near-term education policy issues that have emerged as a result of our response to the COVID-19 emergency. Due to the urgency of the emergency response, I believe these proposals should be considered before the General Assembly adjourns.

Adjustment to Average Daily Membership (ADM) Statute (16 V.S.A. § 4010) requires the Secretary of Education to determine the ADM of each school district for the current school year. This language would be modified for the 2020-2021 school year to require the Secretary to determine the ADM for each school district at a count no lesser than the district’s 2019-2020 ADM. Rationale: Ensuring districts receive at least the same ADM count as last year would promote some measure of stability in the district budgeting process during the emergency period. Allowing ADM to be greater than last year’s number will address the concern in some districts where the number of new pupils has increased significantly.

Enact a Waiver of the Online Teaching Endorsement Regulations pertaining to teacher licensure are controlled by the Standards Board for Professional Educators (SBPE) as per 16 V.S.A. § 1694 which describes the powers and duties of the SBPE. The powers and duties of the SBPE would be amended so that during the 2021-2022 school year, no teacher shall be required to hold an endorsement for online teaching in order to teach online or implement remote learning. Rationale: Districts need predictability now in the status of this requirement to plan for the coming year.

Images courtesy of Flickr/401kcalculator.org and TNR