When Cornwall, Vt., resident Peter Briggs traveled around Europe as part of his international business responsibilities for Alvarez & Marsal, a global “turnaround management” firm, he often visited breweries and hop farms. In his spare time he talked with managers and farmers in Germany and the Czech Republic about their operations. 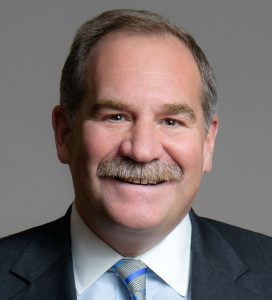 Within a few years, his personal interest in beer making and hops blossomed into a bold business plan to reintroduce commercial hops farming to Vermont — after a hiatus here of more than 90 years.

Briggs is now the driving force behind Mt. Philo Hops, a controversial 59-acre farm he purchased last April that is being prepared for its first planting of hops in spring 2018.

The farm, situated in a zoned agricultural district, is being established on the former Palmer Dairy Farm at the intersection of U.S. Route 7 and East Thompson’s Point Road in Charlotte, Vt.

Briggs, whose family owned a farm in Windsor County for more than a century, feels he’s lucky to be in a state where he can return to his heritage and agricultural roots.

Briggs became fascinated by the ancient European practice of growing hop vines and the harvesting of its seed cones, called strobiles, for use in beer making. He observed that certain geographic areas, such as Germany’s federal state of Bavaria, were similar to Vermont.

“I lived near several hops farms,” he said. “They were beautiful. And since Vermont is very Bavaria-like, I began to ask myself, ‘Why not grow hops here?’”

Briggs began an intensive period of research into the growing of hops especially as it was done in 19th-century Vermont.

As Briggs tells it, he isn’t introducing an alien crop to the Green Mountain State; instead he, along with other smaller-scale farmers of hops in Chittenden County, are reintroducing the crop to the state.

“Back in the 1800s, hops were among Vermont’s largest agricultural crops,” he said. “In fact, Vermont was the second largest producer of hops in the U.S. after New York state.”

Thanks to the historical work of Kurt Staudter and Adam Krakowski, authors of the book “Vermont Beer: History of a Brewing Revolution,” Briggs learned that in 1860, just prior to the start of the Civil War, Vermont experienced a bountiful hop production year; the state produced 638,657 pounds of hops which remains the biggest hops yield to date.

“To put this historical hops data in perspective,” Briggs noted, “at today’s yields, it would take 372 acres to produce that quantity of 1860 hops. The end of hops production here came during Prohibition. After that, the industry moved to the Pacific Northwest.”

Today, trendy craft beers, with several nationally popular labels being made in Vermont, use hops as a flavoring and stabilizing ingredient. The strobiles of the hops plant are valued for imparting a bitter or “hoppy” flavor to the beers.

Mt. Philo Hops will construct a small mill building where harvested hops will be processed, pelletized, packaged and kept in cold storage before shipment to brewers.

“Vermont brewers tell us that if our quality is consistent, they will buy locally. They want more made-in-Vermont content even though we’ll be competing with Northwestern U.S. and European hops,” he said.

But Briggs’ dream of producing a made-in-Vermont hops crop has been met with vocal resistance.

A group of 29 neighbors abutting Briggs’ farm in upscale homes have been protesting Mt. Philo Hops since early in the summer. They were hoping to stop Briggs from developing 35 acres of the 59-acre tract.

The residents have been concerned about water-use issues, the use of chemical pesticides and fungicides in the operation, and the impact of the farm’s tall trellis system on the neighborhood viewshed, which includes Mt. Philo State Park to the east.

While neighbors protested the planned hops yard with its 18-foot high trellis poles and training wires, Briggs remained dedicated to make his vision a reality.

“We have several hurdles to meet our planned goals to make this operation commercially viable and especially to assure safety for the neighbors,” Briggs told True North. “We’ll proceed only if it’s safe.”

Briggs said that he is meeting neighbors’ concerns on the three main issues:

“Regarding water use, we’ve dug catch ponds without impacting the local wells,” he said. “Neighbors have low-producing wells and I believe we’ve largely addressed that concern. Water runs downhill and the ponds are doing their job even now, filling up with recent rain runoff. We shouldn’t need to rely on wells.”

Regarding the use of agricultural chemicals, Briggs said that his operation will follow manufacturer guidelines to insure safety of surrounding properties. 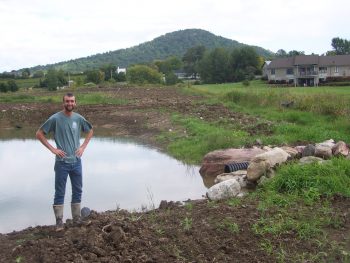 “I understand the concern of pesticide drift,” he said. “They’ve asked us if we can control it. Well, with the help of Julian Post, our farm manager who is a certified pesticide applicator, we are developing a safe plan for spraying.”

“Regarding the viewshed around the farm, we’ve added bigger buffers, more room around this farm. But we have to balance that with our planning (as a business). Buffers can’t be too big and become unviable.”

Briggs said that he is pleased with all the help in the form of technical assistance from the University of Vermont (UVM) Extension Service as well as from the Agency of Agriculture. UVM’s Dr. Heather Darby, an agronomic and soils specialist, has been instrumental in studying hops as a viable crop for Vermont. She has shared her knowledge of hops with Briggs and Post.

But despite evidence presented by Mt. Philo Hops and other agricultural experts of careful farm management practices and a commitment to environmental safety, the 29 neighbors surrounding the farm have been emotional.

At a Charlotte Selectboard meeting Aug. 28, the town finally gave the approval for Mt. Philo Hops to proceed.

Selectboard Chair Lane Morrison told attendees that Mt. Philo Hops was allowed to proceed. Morrison also said that since the farm’s conservation easement is managed by the Vermont Land Trust, that organization will monitor the operation, effectively eliminating the town as the farm is building.

Despite the green-light victory for the business, impassioned neighbors were unmoved by the assurances and technical details presented by Briggs and Post. Even with the thumbs up from town officials, residents have clearly not changed their minds about the new farm stressing that it will have a negative impact on the surrounding neighborhood.

“I was pretty tired after that meeting,” Post told True North. “That was the most emotional beating I ever got.”

Earlier this year, Briggs hired Post to manage the fledgling farm and oversee the preparation of the field for planting during the spring.

Requiring a 21st-century skill set, which includes farming, ag science and even business management, starting a real-world farm is many factors more challenging than the popular FarmVille network game.

“Before we started, we looked at everything from water sources and soil quality to crop orientation and wind and weather patterns,” Post said.

Post, acting as midwife to the birth of Mt. Philo Hops’ operation, has a degree from UVM in environmental studies in sustainable agriculture. He worked in farm management at Shelburne Farms and at the Highfields Center for Composting for recycling food scraps in Hardwick.

“Most of what we’ve done so far here is drainage improvement and get the field ready for planting,” he told True North during a recent tour of the Charlotte farm. “We’ve put in tile drainage, piping in the ground that allows the ground to dry out more quickly. We’ve cleaned out ditches and dug two (catch) ponds.”

Post said the field to be cultivated has a lot of clay but also gravel to help natural drainage. He pointed out that the new, 600,000-gallon ponds were working as designed. Last week, runoff from a rainstorm 48 hours earlier was flowing strongly into the ponds demonstrating the effectiveness of the farm’s new drainage system.

Most of the valley land in Charlotte near Lake Champlain consists of heavy clay.

Nearby Mt. Philo was surrounded by prehistoric Lake Vermont, the predecessor of Lake Champlain. When the ancient lake retreated, what was left behind was a rich, clay bottom along with scattered receding beaches composed of sand and gravel.

“We’ve got some gravel over there,” Post points out. “It may be ancient beach or even the remains of an old farm road.”

The Mt. Philo Hops site has been under cultivation for at least a century.

“The field here has been a farm for nearly 100 years, with the first aerial photograph taken in 1962,” Post said. “At that time it was the Palmer family farm.”

While landowner Peter Palmer died over 30 years ago, three large dairy farms nearby continued to use the land for hay and corn destined for dairy cow feed, at least up until Briggs purchased the land earlier this year.

“This is productive land that has been part of our local agricultural landscape for many generations,” Post added.

The science of hops

When hops was a big crop in Vermont during the Civil War era, growing the plant was just like any other crop. Today, however, with more pests, diseases and climate change, the crop is grown using the scientific method.

In many ways, hops has become a scientific crop, according to Justin Post.

“Our crop will be propagated in a tissue-culture laboratory in Colorado and then moved to a clean greenhouse,” Post said. “Hops can get diseases and viruses that stunt their growth. One of our best tools for fighting disease is to start with none and then not import diseases since diseases are geographic. But since we don’t have many hops farms in Vermont, it’s actually an advantage from the start”.

Among the various concerns of neighbors includes how crops are sprayed for pests and diseases.

“We only spray the leaves of the plants compared to how other Vermont farms apply herbicides,” Post said. “Yes, there’s some runoff from the leaves but it’s targeted and so there’s far less drift.”

Post worked with NOFA-Vermont, the Northeast Organic Farming Association of Vermont, to establish safe, 100-foot buffers around the farm to prevent spray drifting onto neighbors and an adjoining NOFA organic wheat operation by Tom Kenyon on land owned by Peter Demick.

As autumn approaches, Post is too busy to take time and savor the Charlotte Selectboard’s recent decision to approve the farm.

“I’ve been doing news interviews and working with experts to get answers to the questions that everyone is asking us,” he said. “We have a lot to do.”