A government-funded scientist in the Department of Energy said Monday that he intends on conducting an analysis of the extent climate change played on Hurricanes Irma and Harvey. 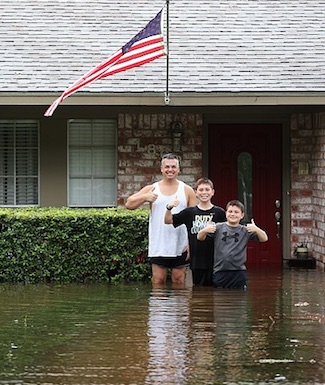 Hurricane Harvey made landfall as a Category 4 hurricane in late August, causing massive flooding and dumping more than 9 trillion gallons of water over southeastern Texas.

Michael Wehner, an academic at the Energy Department’s Lawrence Berkeley National Laboratory, and other scientists want to analyze the degree to which global warming affects natural disasters. They expect the analysis to take at least a few weeks.

“I believe that there is a human contribution to each of these extreme weather events,” Wehner told reporters. “However, due to human resource limitations we won’t be able to analyze them all and will need to choose carefully.”

Climate scientists have urged media talking heads and journalists to avoid making any direct links between global warming and the frequency and intensity of hurricanes, along with other natural disasters. They argue that the data is not clear on the issue.

“We all agree that humans influence warming,” Andrew Sobel, who directs an extreme weather and climate initiative at Columbia University, told reporters about what the scientific field thinks of climate change. “There is more uncertainty about hurricanes.”

Warmer water and air temperatures, as well as extremely low air pressure systems, can produce the energy needed for any storm to become a massive hurricane in the Atlantic. Without that dynamic, hurricanes would be nothing more than a large storm.

“The strongest hurricanes have gotten stronger because of global warming,” Michael Mann, a climate scientist at Penn State University, wrote Friday in The Washington Post. Mann is well known for engaging in climate activism along with his work in the scientific world.

“Over the past two years, we have witnessed the most intense hurricanes on record for the globe, both hemispheres, the Pacific and now, with Irma, the Atlantic,” Mann wrote.

Mann and others suggest that the proximity between Harvey and Irma lends some credence to the idea that climate change is helping to drive hurricane frequency and intensity. Both storms made landfall on the U.S. coast 15 days apart, which broke a world record set in 1933.

Some scientists are urging people to temper their positions regarding the linkage between climate change and hurricanes.

Historian and climate analyst Phillip Klotzbach, for instance, found that Irma’s size and power ranks a distant 7th to the Labor Day storm of 1935. In fact, Irma is tied with the 1928 Lake Okeechobee storm for strongest hurricane in U.S. history. Effective tools for measuring hurricanes did not come into existence until the late 1940s.

Judith Curry, a scientist at the School of Earth and Atmospheric Sciences at the Georgia Institute of Technology, argued shortly after Harvey’s landfall that the storm contains some unique qualities that hurt the linkage.

“I’m sure you won’t be surprised to hear people blaming Harvey on global warming,” Curry wrote in a blog post. “How unusual was Harvey? Well, it will definitely be in the record books for ending the 12-year drought of major hurricanes striking the U.S.”

Harvey made landfall as a Category 4 hurricane in late August, causing massive flooding in Houston. It quickly weakened to a tropical storm, but still managed to dump more than 9 trillion gallons of water over southeastern Texas. Harvey got stuck in a type of eddy off the coast of Texas that forced it to hang around Houston much longer than it otherwise would have.

“Harvey will be in the record books for almost unbelievable amounts of rainfall,” Curry wrote. “While there was a large amount of water vapor ingested into Harvey, the huge amounts of rain are associated with Harvey’s stalled movement, while still close enough to the Gulf to continue to suck in moisture.”