As I warned about three weeks ago, the Democrats of the super-majority have been blazing through the redistricting process. They were ready to rush through the first step with virtually no debate or input from the majority of the Apportionment Board. Despite Republican efforts to oppose it, Democrats sidelined the tripartisan majority’s plan and instead pushed forward a map drawn up primarily by their party’s appointee.

Now the ball is in the court of the BCAs (Board of Civil Authority) to comment on the plan. While they were given until February 15th to comment officially, the House Gov. Ops Committee already scheduled testimony from five counties last week. They already have this week booked up for comments from the rest of the state’s counties.

The problem is that BCAs require a properly warned meeting with a certain notice period. Given the well-documented problems of the Postal Service and the fact that many Town Clerks are busy with local municipal elections and in some cased their town’s budget process, it can mean that even BCA members who knew this process was happening and were ready and waiting for documentation didn’t get information until this weekend. That’s barely enough time to decide to schedule a meeting — forget about properly warning the meeting, and then convening it before testimony started last week.

Despite being rejected by the Legislative Apportionment Board, Democrats need the testimony they collect on their alternative plan to confirm their Party’s preferred map, but still give the appearance of a public input process. By scheduling testimony more than two weeks earlier than the deadline given to BCAs, it’s likely many BCAs will be caught off guard and unable to participate in this week’s testimony — unless they had some advance nudging from Democrats in the know. This approach could result in fewer comments overall, and thus result in fewer negative comments for the plan that was rejected by the Apportionment Board. If paired with little media scrutiny or public notice, it just might work.

While Gov. Ops says they will continue to receive testimony through mid-February, by lining up their preferred advocates to get in early they can create momentum such that comments coming in later can be more easily marginalized as coming in “too late” in the process for them to adjust to. Or if they cherry pick individuals who support their map out of certain select boards who generally don’t, they can avoid getting input from the larger group when they find is disagreeable.   For example, Rep. Mike McCarthy voted against the majority of his own select board. If no one else from St. Albans City comes in to testify because there isn’t enough time, they can sweep under the rug the opposition from the largest town in Franklin County.

Whether or not Democrats are trying to stack the deck in their favor, there are still a few things anyone who wants a fair process can do about it — especially if you act now.

First, every person reading this who serves on their BCA as a Justice of the Peace, Town Clerk, Select Board Member, or other capacity should contact the chair of their BCA immediately to request a meeting to provide official commentary if that hasn’t happened already. If you can’t get your BCA to meet prior to the February 15 deadline, contact the House Gov Ops committee TODAY to see if you, or the chair of your BCA or select board can testify THIS week.

Second, if you are not on the BCA, contact your local select board members, and any Republicans elected to your BCA and let them know that House Gov. Ops has already scheduled testimony for this week and give feedback.   Encourage them to take the actions listed above.  Make sure to let them know that you want your town to join the majority of Vermonters who want a fair map this cycle where every Vermonter gets the same number of House Reps on the single member district map.  Contact other people in your town, and ask them to do the same.

Third, if there are no Republicans on your BCA, consider running for Justice of the Peace this year to make sure that Republicans have a voice in your town for important matters like this.  You can notify us on our website and we will put you in touch with your local Republican committees.  If you don’t know who serves on your BCA, you can check your town’s website, or contact your local town clerk for more details.

Your town’s BCA has already had a chance to comment on the Apportionment Board Approved plan this fall.  But now they are being sent a completely different map – make sure that your BCA knows the differences.
Here are the two maps:
LAB Adopted Map (previously seen by BCAs, now rejected by House Gov Ops) 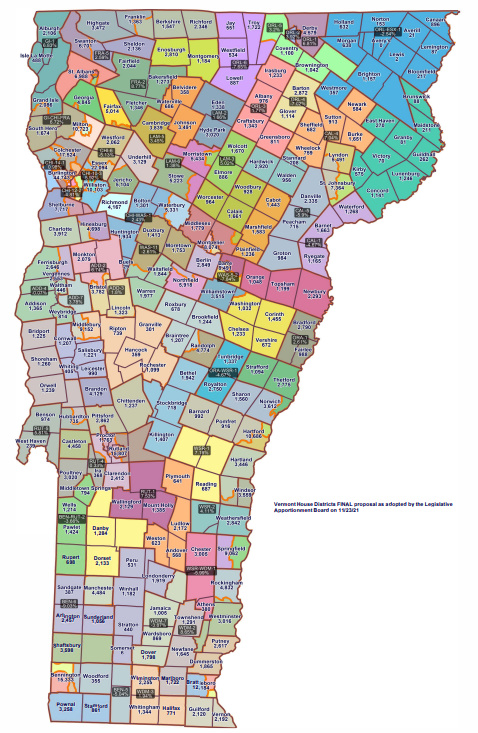 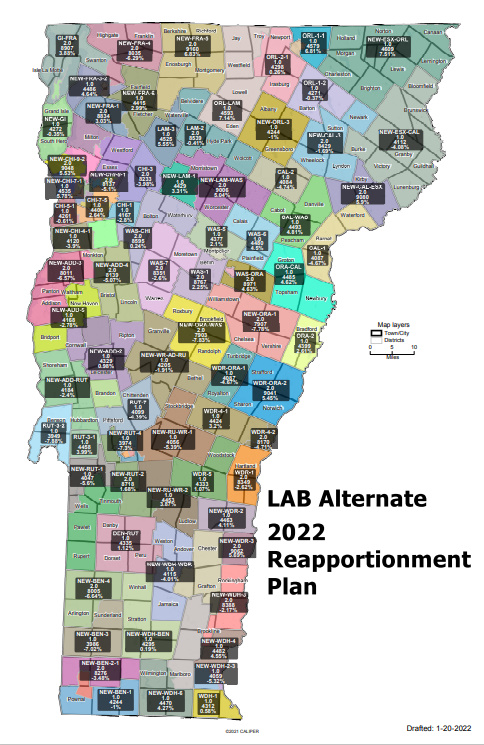 Even if they chose not to comment on the first map previously, they have the right to do so now, and clarify to the legislature that it is preferable to the second map because it provides equal representation to all voters.  You can also encourage them to comment on the fact of how rushed this process is, and how the legislature has basically abandoned the feedback already collected and integrated from the Apportionment Board Map.

In just 15 days the official public comment period on this will close, and once the legislature makes their decision this is the map that will shape Vermont politics for the next 10 years.  Make sure that if you want to get involved, you don’t wait until it is too late!

Here’s the Agenda for House Gov Ops This week: