Memorial Day is a unique holiday. It’s the only one we don’t really “celebrate” like other holidays. It is a time to slow down, stop and remember. You could argue that it’s more patriotic than Independence Day, and more expensive than Christmas, because it has cost the lives of millions of young Americans to preserve the freedom and prosperity that we enjoy to this day. It’s a day that we remember that freedom doesn’t come free — there is a dear price to pay for it.

For me Memorial Day really comes in to focus when it gets personal. Rather than remembering the sacrifice of “veterans” in a general and vague sense, the weight of the day really lands on me when I think of specific and named people who gave up their life, and more importantly the loved ones they leave behind. 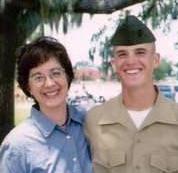 This weekend I will be thinking especially about my dear friend and former colleague Rep. Vicki Strong. Vicki is one of the most joyful, kind, patient people I have ever had the pleasure to know. She has such a sweet disposition that even when you disagree with her, you can’t help but smile.

This is even more impressive in light of the fact that Vicki is a Gold Star Mom. This is the designation given particularly to mothers whose sons go off to serve our country and give their life to do so. Vicki’s son Jesse Strong was a marine who had been killed while serving in Operation Iraqi Freedom when insurgents ambushed a Marine conoy northwest of Baghdad hitting his vehicle with a rocket-propelled grenade.

This Memorial Day I will be thinking about Jesse Strong. If he had survived, he would be turning 42 this year. He was born just two years before me, so I can’t help but think how much life I have had the privilege to be able to enjoy; getting married, starting a business, having three kids, serving in the legislature, and now in this role. It makes me a little more appreciative and thankful for what I do have — and it puts all my complaints in perspective.

But in addition to thinking of Jesse, I will also think of his brother Matt, his Father Nathan, and his mom Vicki. It has been such a show of remarkable determination the way that Vicki has taken this tragedy and rather than being bitter about her family’s loss, she is instead inspired by her son’s service and selflessness to go do more serving in a way he isn’t here to do anymore.