This commentary is by Christopher Arps, a member of the Project 21 black leadership network and president of Americans for Citizen Voting.

In its “Blueprint for a Better Deal for Black America,” the Project 21 black leadership network offers recommendations to “remove barriers blocking African Americans from reaching their full potential and ensuring the American dream for all.” This includes protecting election integrity and the hard-fought right for blacks to vote for the candidates of their choice. 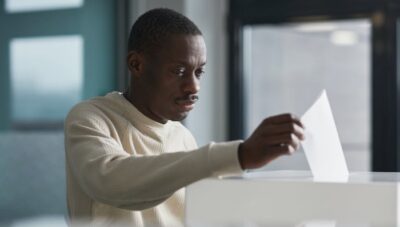 When 5%, 10% or 15% of the vote in a community is made up of dead people, former residents or people ineligible to vote, blacks are disenfranchised.

As a Project 21 member and president of the Americans for Citizen Voting (ACV), one in particular especially appeals to me. That is “Restoring the Right of Self-Determination of Black America”:

One of the key goals of the Civil Rights Movement was to ensure that every black citizen had a voice in selecting elected officials at the federal, state and local level. That was the intent of the 1965 Voting Rights Act.

Today, black citizens are still being thwarted in exercising their right to determine or decide the policies they will live by — only now it is being done through less direct, more subtle schemes to dilute their vote. When 5%, 10% or 15% of the vote in a community is made up of dead people, former residents or people ineligible to vote, blacks are disenfranchised.

To thwart voter fraud, Project 21 recommends requiring proof of citizenship to register to vote and proof of identity to cast a ballot. Of course, the left is crying foul. But noncitizens are voting — even National Public Radio admitted it.

Opponents also claim a photo ID requirement is racist and amounts to voter suppression. But ACV commissioned a poll of 1,011 likely Michigan voters that found more than 75% of Michiganders support requiring a government-issued photo ID to vote. Black support is even higher at 79%. So much for racism — blacks want their votes to count!

Along with the usual suspects like liberals and poverty pimps, there’s a surprising anti-integrity constituency:

“Opponents of an effort to expand Michigan’s voter identification requirements orchestrated a ‘scheme to pay off’ petition circulators in violation of campaign finance laws,” The Detroit News alleged.

Dustin Wefel, a Michigan petition gatherer, claimed [the anti-initiative] Protect MI Vote worked with a consulting firm, Groundgame Political Solutions, to compensate petition gatherers, in part, so they wouldn’t assist the Secure MI Vote initiative, making it difficult for the group to advance its proposal.

The payments weren’t properly disclosed in fundraising reports, the complaint alleged. The filing cited text messages and a $50,000 contract between Groundgame and Wefel.

2022 could be very bad for Biden and his allies. A president generally loses congressional seats among his supporters during midterm elections, and this cycle looks to be no different.

That’s why liberals appear willing to resort to unscrupulous tactics to thwart voter integrity efforts and subvert the will of the people. They should not be allowed to game the system.

5 thoughts on “Opinion: Voter fraud disenfranchises black Americans. It’s time to put a stop to it”