As Hurricane Ian bears down on Florida’s Gulf Coast, the liberal media is desperately trying to score political points by linking the near-Category 5 storm to man-made global warming.

Calling on their go-to activists and scientists, the media has pummeled us with headlines such as “Hurricane Ian Intensifies into a Monster with Climate Markings,” which was republished in Scientific American of all places. 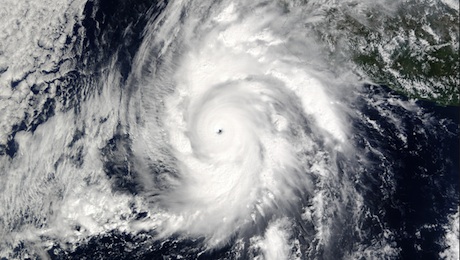 To play climate politics when lives are at stake is absolutely abhorrent. Yet every year, the media plays the same game, blaming every hurricane, flood, drought and even snowstorm on global warming.

NPR went with: “Hurricane Ian’s forecast shows the impact of a changed climate.” And The Associated Press claimed the hurricane “is quickly gaining monstrous strength as it moves over oceans partly heated up by climate change,” quoting a scientist who calls Ian a “harbinger” of what’s to come in a warming world.

The media narrative on hurricanes is shockingly simple, yet light on data — per CNN, “Ian’s rapid intensification … is something scientists say is becoming more likely for hurricanes as the climate crisis advances, pushing ocean temperatures higher and laying the groundwork for them to explode at breakneck pace into deadly major hurricanes.”

Hand-wavy claims like that, backed with scientists’ seal of approval, are difficult to dismiss. But what does the United States’ top authority on hurricanes have to say about attempts to blame climate change for Hurricane Ian’s intensity? I did what most of the media failed to do and asked.

“It is difficult to attribute all of the characteristics of individual storms like Ian to climate change,” Tom Knutson, senior scientist at the National Oceanic and Atmospheric Administration’s (NOAA), said.

Knutson has helped author massive scientific reports usually heralded by the liberal media, such as the National Climate Assessment. If there’s one person who understands the data and the science on hurricanes and climate change, it’s him.

“Ian is just one case out of the ‘population’ or one sample of the current statistical characteristics of storms,” Knutson said.

Knutson’s smackdown of speculation that “the science” provides a clear link between Hurricane Ian and greenhouse gas emissions isn’t surprising. Knutson is also the author of NOAA’s own scientific assessment — the “scientific consensus,” if you will — on hurricanes and climate change more broadly.

I distinctly remember a time when the liberal media, Democrats and climate activists viciously attacked anyone who questioned the so-called “97% consensus” on global warming. So why doesn’t the media ignore NOAA’s top-tier assessment on this matter?

To answer that question, all you need to do is read the assessment’s conclusion: “In summary, it is premature to conclude with high confidence that human-caused increasing greenhouse gases have had a detectable impact on past Atlantic basin hurricane activity, although they are strongly linked to global warming.”

A strong, definitive statement, but apparently one the media can’t or refuses to understand.

When CNN’s Don Lemon tried to turn what should have been a public safety announcement about a deadly storm into a political stunt, none other than the head of the National Hurricane Center (NHC) smacked him down.

“What effect does climate change have on this phenomenon? Because it seems these storms are intensifying,” Lemon asked. To which, NHC Acting Director Jamie Rohme responded: “I don’t think you can link to climate change to any one event.”

Rohme threw Lemon a bone by saying climate change “may” be making hurricanes worse, but “cautioned against” linking it to “one event.”

Frankly, Rohme was being nice. To play climate politics when lives are at stake is absolutely abhorrent. Yet every year, the media plays the same game, blaming every hurricane, flood, drought and even snowstorm on global warming.

At least this time, top NOAA scientists are trying to set the scientific record straight and get people the truly vital information they need in order to stay safe without political interference.

7 thoughts on “Opinion: The media is trying to link Hurricane Ian to global warming. Here are the facts”