Vermont State Treasurer Beth Pearce has signed her name to a letter along with 11 other state treasurers opposing legislation intended to discourage business dealings with companies that engage in environmental, social and governance (ESG) training of their employees.

According to investopedia.com, environmental, social, and governance (ESG) investing “refers to a set of standards for a company’s behavior used by socially conscious investors to screen potential investments.” 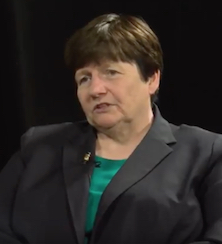 Critics say ESG training is liberal indoctrination of the workforce, as well as an offense to investors who may disagree with companies becoming political or “going woke.” The backlash against ESG training and policies has manifested in the form of legislation in conservative states that aims to prohibit state business dealings with companies that engage in ESG policies.

Pearce is siding against these so-called anti-ESG policies. She says it is in a state’s best economic interest to invest freely in the interest of benefiting taxpayers.

“Several states in our country have started blacklisting financial firms that don’t agree with their political views,” the letter from the treasurers reads. “West Virginia, Idaho, Oklahoma, Texas, and Florida have created new policies and laws that restrict who they will do business with, reducing competition and restricting access to many high-quality managers. This strategy has real costs that ultimately impact their taxpayers.”

Republican Gov. Ron DeSantis of Florida is one leader who has supported avoiding companies that engage in ESG policies.

“Corporate power has increasingly been utilized to impose an ideological agenda on the American people through the perversion of financial investment priorities under the euphemistic banners of environmental, social, and corporate governance and diversity, inclusion, and equity,” DeSantis said in a statement.

But Pearce and the other treasurers support liberal ESG policies, including left-wing views on the environment and social issues. The letter states those who oppose ESG are opposed to “progress made by those of us who believe in collaboration and engagement.” The treasurers argue corporations should be making policies around climate.

“Organizations that recognize the threat of climate change are already working toward reducing their carbon footprint, while the automobile manufacturers have begun rapid movement to electric vehicles,” their letter says.

According to ESGEnterprise.com, companies that wade into political areas can gain financial opportunities not available to those that forego ESG.

“Environmental, social, and governance are the criteria established for assessing the sustainability of investments in the light of the ever-dynamic climate change. ESG investing involves a consideration of ESG factors. Over 40% of investors currently apply ESG investing, as passive or active investors,” the website states.

In 2016, however, Pearce argued against divestment of the state’s pension retirement funds that were in part invested in fossil fuel companies.

“From our end, legislating investments is bad practice,” she wrote in 2016. “… My first priority is to protect the 49,000 active, vested and retired members of the system, the beneficiaries, and the taxpayers who put dollars into that system. For me, I don’t think [divestment from carbon-based fuels] is the best approach.”

Six years later Pearce and other state treasurers are advocating that corporate policies be guided by political concerns about climate.

“They [the ESG critics] refuse to acknowledge, in the face of sweltering heat, floods, tornadoes, snowstorms, and other extreme weather, that climate change is real and is a true business threat to all of us,” they wrote in their letter.

Yet critics of ESG see the concept as corporate political indoctrination. Patrick Tyrrell, a research coordinator in The Heritage Foundation’s Margaret Thatcher Center for Freedom, wrote in 2021 that “ESG advocates force companies to take positions in the political arena on issues that may have nothing to do with the company’s actual business activities … they are signaling is their dereliction of their fiduciary duty to those who have invested in their companies.”

Another outspoken critic of ESG policies, conservative talk-show host Glenn Beck, highlighted some of the latest policy changes at Pepsi in one of his videos.

“They now publish business and sustainability reports,” Beck said. “Remember, this is a glimpse at the future. Their annual report now includes sections such as how much they invest to give back to the community. How much are they investing in women entrepreneurs? What’s their track record on human rights and what is their carbon footprint?”

Images courtesy of Public domain and Vote for Vermont/Pat McDonald