The reliability of voting machines to accurately count votes has come under scrutiny — especially since the fiasco of the Windham Incident that took place at the Nov. 3, 2020, general election. Those election results produced NH’s largest numerical discrepancy between election day vote totals and a subsequent hand recount.

That disturbing event triggered people in a few dozen NH towns to submit Warrant Articles seeking to ban the use of voting machines to count votes in their town. Many of those people have reached out to me asking for examples and reasons for voters ban voting machines.

This graph shows the different vote totals that were counted for the Rockingham County District 7 Race in the Windham 11/3/20 Election. It contains the election day totals (11/3/20), the hand recount totals (11/12/20), and the totals that were generated during an audit when all of the ballots were fed through each of the four voting machines 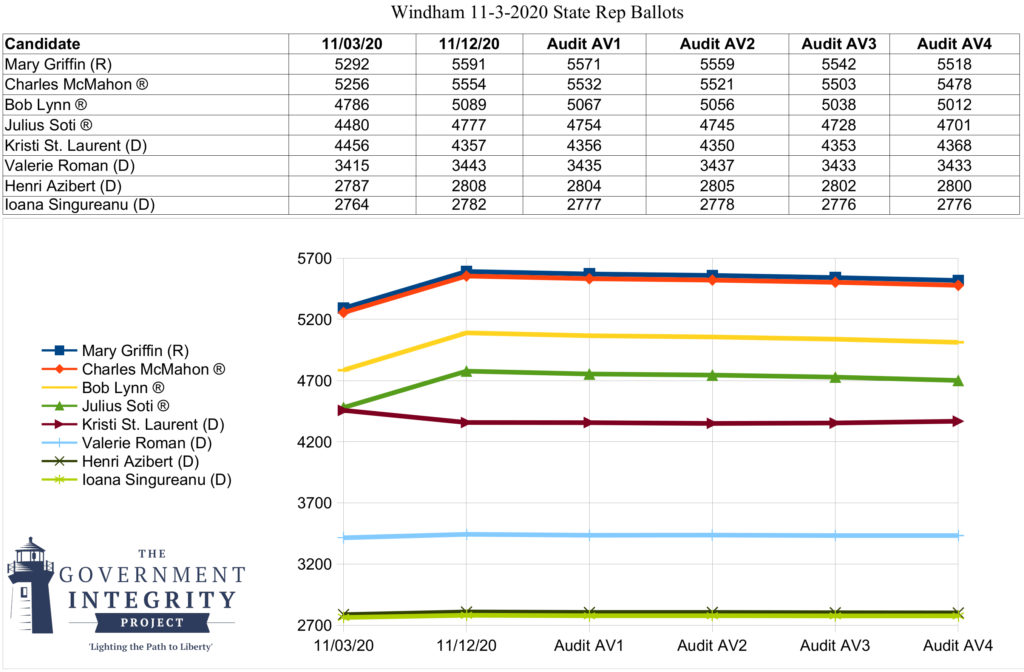 The column titled “11/03/20” shows the total number of votes for each candidate on election day – by adding the vote totals from all four machines.

The column titled “11/12/20” shows the total number of votes for each candidate that were hand counted by the Secretary of State’s office.

The discrepancies above led to an audit where all of the ballots were fed through each machine (See Audit AV1, Audit AV2, Audit AV3 and Audit AV4). The vote totals across each of the four machines were NOT consistent – and NONE of the audit machine totals matched the results of the hand counts.

The types of discrepancies that took place in the Windham 11/3/20 election appear to have occurred in many other towns across NH. Towns like Derry, Nashua, Merrimack, Bedford, Hookset, Sandown and many more are just a few that showed similar anomalies that mirror what took place in Windham. Unfortunately, those in a position to investigate have shown no interest in doing so.

As voters, we are asked to blindly trust with no means to verify. When the integrity of our elections are at stake – that is unacceptable… which is why I believe that hand counting ballots is the best method for counting votes.