For years, cities, counties and states spent millions of dollars paying full time salaries and benefits for employees that were obligated to belong to labor unions. Collective bargaining agreements with labor unions around America were financed by high paid union lobbyists and bosses. Their mission was to obtain capriciously high salaries and benefits for civil servants compared to private industry.

Since the early 1900s, public sector union bosses have unified with Democratic federal, state and local politicians to enact policies that forced civil service workers to pay ransom in order to keep their jobs. To appease members for receiving more for doing less, union bosses used their dues money to finance the election of Democrats who’d reward them with gratuitous benefit packages. 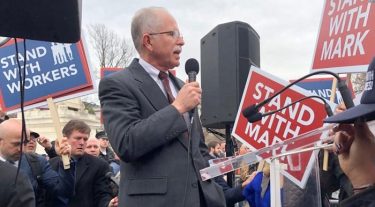 Almost three years to the day, the U.S. Supreme Court ruled in favor of Mark Janus in the landmark Janus v. AFSCME case. They held it was unconstitutional to force public sector workers to pay money to a union to maintain employment. The case was filed by Mark Janus, who balked at paying dues for collective bargaining and other work that the union did on behalf of their employees in the workplace.

While organized labor was dealt a major blow by the Supreme Court in Janus, the ruling did not impact obligations in the private sector. The court held that the private-sector model cannot be applied to “public sector unions,” since collective bargaining in the public service is approved by government officials.

The Janus decision was a win for taxpayers also since they pay the salaries and benefits of public service employees. Many Americans thought it was unfair for pubic service union members to pay into a system that was financed by them. These unions didn’t only concern themselves with labor issues, they engaged in political activity. Janus gave employees freedom of political choice also.

Public unions in all union states were affected by Janus. It was predicted Janus would destroy the public-sector unions since they would lose income. This would also limit their political power. Why would workers who could receive the same benefits as members without paying dues join a union?

But America underestimated the political power of public service unions. They had an arsenal of state and federal politicians in their hip pocket by the time SCOTUS ruled on Janus.

Many liberal states with strong unions had already taken legal steps to buffer public-sector unions against the impact of a positive Janus ruling. Unions were aware they would lose dues money and members, and were working with liberal politicians to cut their losses. Therefore, the Janus decision did not negatively affect the unions or their Democratic Party allies like labor experts had predicted.

Within weeks of the Janus ruling, blue states passed legislation to protect unions from the impact of Janus. Liberal states like New York, where 70% of public employees are unionized, were first toreact. Fallen Gov. Andrew Cuomo issued an executive order shielding work records of public union employees to prevent them from being informed of their newly acquired rights. Cuomo said, “This order is to protect workers from harassment and intimidation by the union haters.” His order also required new hires to meet with union reps so they could be intimidated into joining the union.

California, Washington and New Jersey prohibited employers from discouraging membership. In New Jersey, public employers who violated this provision would have to reimburse unions for lost dues. These laws were designed to prevent workers from learning about their rights after Janus.

Although public service unions found ways to work around Janus, there were some unanticipated benefits of Janus. The difference between public and private unions is critical. Private unions are governed in the text of the National Labor Relations Act (NLRA), and by federal court decisions. But no matter how much these unions pay liberal politicians, taxpayers only indirectly foot the bill.

Since the Janus case was tried in the court of public opinion, it shed light on the obtrusive power of the unions. And this did not sit well with many Americans who blamed unions for higher prices on tangible goods and services. They took their anger to state legislatures who began passing right to work laws.

The U.S. union labor movement has been in crisis for years and has continued to hitch its hopes for survival on state and federal Democrats. But no matter what liberal lawmakers do for the unions their slide will be impossible to reverse since union interests are at odds with those of members.

Unions are out of touch with today’s every-man-for-himself attitude. The Hoffa days of brotherhood are gone forever. Former AFL-CIO president Richard Trumka tried to strictly enforce the Fair Labor Standards and National Labor Relations Acts to force more people into unions, but that backfired. Workers value individual pay over collectivism. They want the best deal for them, not for a union.

John Wooden told us, “It’s OK to be a team player. But personal effort makes you a winner.” Only 10.3% of the U.S. workforce is unionized today. Labor Department data reveal that is half of what it was in 1983 and a third of what it was in 1950. With many states passing right to work laws and employers and employees benefiting from them, the labor union model of “one size fits all” in the workplace is obsolete. Workers care less about brotherhood and more about their own paycheck.

The irony of Janus is it had little affect on public unions since blue states were able to neutralize it. Although Janus did not apply to private unions, it publicized the political power of unions and voters reacted. Today, the entire south is right to work and a total of 30 states now have right to work laws.

Georgetown’s Joseph McCartin wrote that when unions became dependent solely on Democrats to prioritize their needs, this made it difficult to sell their policies to the public. This ruined their image with the average American voter. Labor and politics don’t mix and this will be the union’s Waterloo.