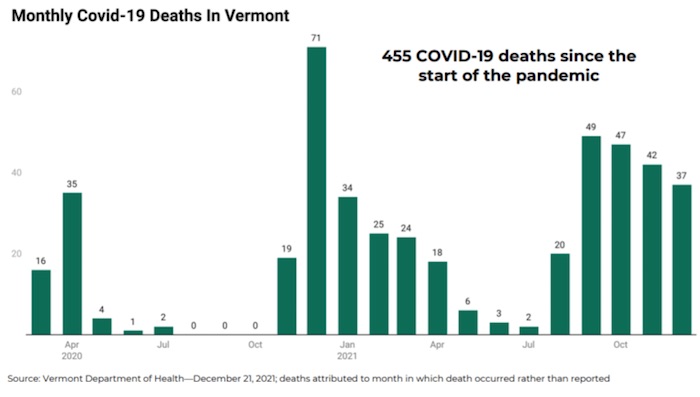 Statistics revealed during Tuesday’s press conference show that 455 Vermonters have died of Covid-19. At least some of these Vermonters died “with” Covid-19 and not as a direct result of the disease, Gov. Phil Scott and Health Commissioner Mark Levine said during the press conference.

How many? They don’t know.

Vermont Daily Chronicle wanted to know because public policies aimed at driving down the Covid death rate are painful to some Vermonters. As Scott and Levine noted with approval at the press conference, vaccine passports are an ‘incentive’: get vaxxed or lose access to public places or even your job. So we asked: “How many of the unvaccinated dying of Covid actually had Covid symptoms leading to death, and how many who merely tested positive actually died of other causes? And if there is no effective way to break that down, why not?”

“I’ve had some of the same questions. Because I see a number of the deaths as well – they die with Covid, they have tested positive for Covid, and it probably contributed to their death – but not all. There are some that had terminal cancer, for instance and so it was inevitable. But at the same time, we want to be able to communicate exactly what we’re seeing. Under the conditions that we impose upon ourselves and others throughout the country, I believe that’s the guideline that we use, so that we wouldn’t be accused of hiding anything.”

“I can tell you that because we have a much smaller number of deaths in Vermont we do have eyes on every single one and i can tell you that particularly now during the Delta surge the deaths that have occurred in the unvaccinated people are generally people who ended up in an ICU because they had such a severe case of covid – not exclusively, but a very large percent. There will probably be some that had Covid as being present at the time of death, probably the straw that broke the camel’s back, and a person who had other illnesses but it’s really hard to give you the exact number you’re looking for based on the fact that you can only read into a death certificate so much, and not every case is as easily decipherable.

“But my instinct about the delta surge, I think you can take to the bank.”

Images courtesy of Public domain, Vermont Department of Health and state of Vermont