As Benjamin Franklin said, “Democracy is two wolves and a lamb voting on what to have for lunch.”

Has our republic (federal and state) reached the end of its existential rope? Or, is our current state of affairs simply a part of the learning curve inherent in the perpetual rebalancing of our “right to be protected in the enjoyment of life, liberty and property,” while at the same time being “bound to contribute the member’s proportion towards the expense of that protection”? 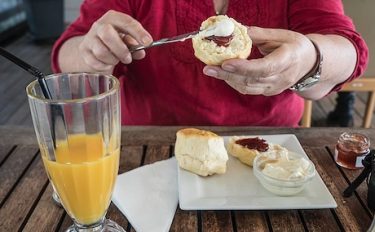 Eshelman: We will, one way or the other, learn again that there is no such thing as a free lunch, no matter who — wolf or lamb — survives democracy’s invitation to dine at the commonwealth’s table.

This contradiction, presented by Chapter 1, Article 9 of Vermont’s Constitution — the so-called proportional contribution clause — must not be underestimated. What and how this “proportion” is determined is a question of the highest importance.

The existential dilemma is not new. It was seriously apparent in 1623. Despite Plymouth Colony’s newly learned skills — how to grow corn, catch fish, and gather nuts and berries — the commonwealth wasn’t producing enough food to survive. When its colonists determined to embark on an experiment, an innovation necessitated by a “starving time,” little did they realize their mutual agreement to establish private property rights — the convention that ultimately saved their individual and collective souls — would, 165 years later, fertilize seeds of Independence in America with the recognition that everyone is endowed by their Creator with certain inalienable and individual rights.

We are today confronted again with this question of balance. It’s cyclical. When the benefits of self-determination increase, as provided by the “protected enjoyment of life, liberty and property,” members naturally become complacent in their fiduciary responsibilities, both to themselves and to others. After all, relative to their previous and less advantaged condition, newly found wealth necessarily becomes less apparent as one’s individual standard of living increases. As a result, we tend to spend more frivolously.

Consider Vermont’s 6,044 nonprofit corporations. They have become a $6.8 billion industry with $13.2 billion in asset value. They don’t pay taxes. Add to that Vermont’s annual $4 billion state government and public education revenue stream. Combined, that’s more than 30 percent of Vermont’s annual GDP. Yet these organizations don’t “contribute the member’s proportion towards the expense of [their] protection.” They ostensibly are that protection.

And make no mistake: Notwithstanding the current weeping and gnashing of teeth by all political factions, as a result of self-determination we are individually more prosperous today than we have ever been, despite one’s relative station, even when compared to the wealthiest “one-percenters” among us.

But there is danger on the horizon. Consider Benjamin Franklin’s final caution when asked at the close of the 1787 Constitutional Convention in Philadelphia what form of governance the Founders created. His response was, “A republic … if you can keep it.”

Today we find ourselves at another existential crossroad of imbalance. Yes, we’ve survived similar times, but the collective commonwealth that nearly wiped out the Pilgrims is again creating unsustainability. And, as before, we will, one way or the other, learn again that there is no such thing as a free lunch, no matter who — wolf or lamb — survives democracy’s invitation to dine at the commonwealth’s table.

3 thoughts on “Eshelman: There is no such thing as a free lunch”