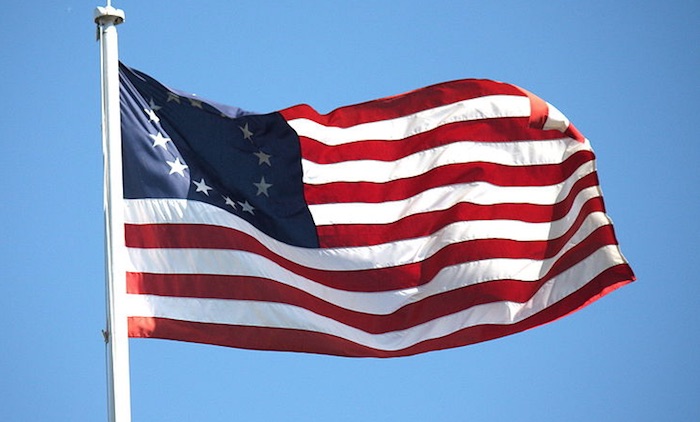 Nike recently pulled a line of shoes — the Air Max 1 USA, featuring a Revolutionary War-era American flag, the so-called Betsy Ross flag — which was slated to be rolled out for the Fourth of July holiday.

Why? Because, according to The Wall Street Journal, Nike endorser and former NFL player Colin Kaepernick deemed the flag an offensive symbol:

After images of the shoe were posted online, Mr. Kaepernick, a Nike endorser, reached out to company officials saying that he and others felt the Betsy Ross flag is an offensive symbol because of its connection to an era of slavery, the people said. Some users on social media responded to posts about the shoe with similar concerns. Mr. Kaepernick declined to comment.

Kaepernick is a former NFL quarterback who washed out of the league after popularizing national anthem protests.

“I am not going to stand up to show pride in a flag for a country that oppresses black people and people of color,” Kaepernick told the NFL media when he launched his protests. “To me, this is bigger than football and it would be selfish on my part to look the other way. There are bodies in the street and people getting paid leave and getting away with murder.”

But being logically consistent doesn’t seem to be a problem for Kaepernick and Nike.

If the flag is offensive because it existed during “an era of slavery,” then we can certainly apply that view to the modern American flag, too, since it is based on the design of the Betsy Ross flag.

And, if we’re really digging deep here, isn’t Nike and its logo also offensive given that the name of the company is based on the Greek goddess of victory,which was most certainly created in “an era of slavery”?

Nike’s adherence to political correctness is all the more absurd considering that it also kowtows to autocratic regimes that perpetrate modern human rights abuses.

In the same week that Nike buried the Betsy Ross sneaker, the company pulled products in China made by designer Jun Takahashi after he expressed support for the Hong Kong pro-democracy protests.

Nike said it ditched the products “based on feedback from Chinese consumers.” Of course, in Communist China, public opinion is highly controlled by the state.

“So the Chinese government and Colin Kaepernick, then, are either implicitly or explicitly calling the shots at Nike, pressuring the company into making business decisions to cater either to this mob or that. And those decisions aren’t passing without comment,” wrote National Review’s Alexandra DeSanctis.

Nike’s move to ditch the Betsy Ross shoes is just the latest example of corporate America putting its foot firmly on the left-wing side of the culture wars. It also illustrates that there is a growing mass of people in the U.S. and elsewhere who are perfectly fine with, and, in fact, openly embrace, an anti-American message.

As a recent Gallup poll demonstrated, American patriotism is at a record low, with only 45% saying they are extremely proud to be American. That’s down from 57% in 2013.

It wasn’t long ago that the American left chafed at the suggestion that they hated America or didn’t feel patriotic.

Yet today, that’s an open position for many on the left, with some like New York Gov. Andrew Cuomo saying, “America was never that great,” and New York Times Opinion saying, “The U.S. is really just O.K.”

The myth of America as the greatest nation on earth is at best outdated and at worst, wildly inaccurate. If you look at data, the U.S. is really just O.K. pic.twitter.com/pFrWBH0Zfl

Is it surprising that it’s come to this?

For generations, our schools have morphed from being institutions aimed at transmitting citizenship and patriotism into engines of un-assimilation. Our media and popular culture institutions portray love of country as inherently racist and xenophobic.

The only time to be proud of one’s country, it seems, is when progressives are doing well at the ballot box or are in the White House—which is precisely the opposite of what genuine patriotism should be.

It’s a wonder that such efforts at teaching nonpatriotism have left any resistance. However, reactions to this latest move by Nike shows how there is a potent and growing element of opposition to corporate virtue signaling—and there very well may be a financial price to pay.

I stopped buying @Nike products long ago and won't ever again. Good for Arizona to take this step. But don't stop here. Cancel all the other taxpayer-funded incentives you're giving to these corporations! https://t.co/IV0pfNeN44

Nike thinks American flag is symbol of oppression? What planet are you on? Nike gladly allows Chinese Communist Party to tell it what products to sell while building its business around sweatshop labor. Nike is anti-American, pure & simple. https://t.co/AgHkCnVi33