MONTPELIER — Students at Vermont State University — the new academic institution set to form from the merger of three state colleges — may be able to pursue more classes and degrees than ever before, its inaugural president said.

University President Parwinder Grewal, who took on the role in July, said in an interview Wednesday that he wants to use “the strengths from different campuses to build this larger diversity” of new programs and processes. That will include opportunities for current and future students to gain “access to additional programs, degree programs, professional development programs, and access to faculty on different campuses.” he said. “So all those students can already begin to expect what the new university would bring.” 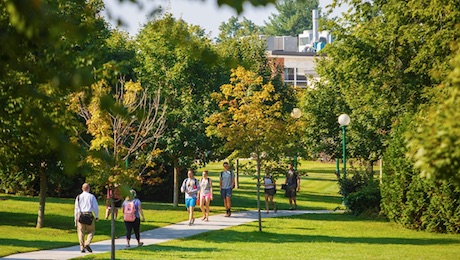 The university, set to open next summer, will be the result of consolidating three of the Vermont State Colleges System’s four institutions: Castleton University, Northern Vermont University and Vermont Technical College. The move follows years of funding strains and declining enrollments.

Grewal, who comes from an administrative role at another merged college system in Texas, has a delicate task in trying to blend three communities into one. Each campus is in a different part of the state and has its own history and culture that people don’t want to lose.

“We have a lot of traditions here that we value, and a lot of things like athletics, and in-person classes,” said Preston Garcia, Faculty Assembly chair at Castleton.

Grewal has tried to balance those concerns with the realities of a merger by embarking on a listening tour.

“On my day one, I did not go to my main office. … I showed up at Lyndon and Johnson’s campus,” he said. “One of the major things in bringing institutions together like this is listening, listening to concerns and then quickly addressing them.

But drop-in visits and forums might not make up for not having the college president on campus full time, a concern Garcia addressed.

“I think it’s just the worry of what we could potentially lose, versus the positives of what we might gain,” Garcia said.

The merger has left faculty rushing to develop a new curriculum and course catalog from scratch, he said, which meant professors from each of the campuses had to start working together.

In a way, that has started to get at Grewal’s goal of creating a new, unified community.

“We have been getting to know each other’s students and faculty — they’re great people,” said Janet Bennien, who chairs the Faculty Assembly at NVU. “We are also working towards creating fun spaces for faculty to get together. We are all learning and growing from this experience, expanding our worldview.”

Many balked at merging the three institutions when the idea was first introduced. And the wariness remains.

“(There’s) trepidation on everyone’s part here,” Garcia said. “Rightly so because so much of this has been unknown, and there are still unknown things going on behind the scenes.”

He continued: “Everyone here at Castleton, we really love the university. And we really like working with each other, and we love the students here. So, you know, it’s just one of those things that you protect what you value.”

Grewal said he understands the importance of protecting what made each school special.

Grewal thinks the input gathered from those forums can be used to help the new university get off the ground, too.

For the rest of this year and the start of the next, Grewal said his administration also wants to prioritize hiring.

“We are building leadership, we are putting leadership in place for Vermont State University by hiring all the leaders or identifying from within or hiring from outside,” he said. “So that will be accomplished this year.”

He also made some big promises as he shared his excitement about his new work. “(The university) will increase access, it will reduce the cost to the student of education, and it will prepare students better by engaging them wherever they are living in their local communities,” he said.