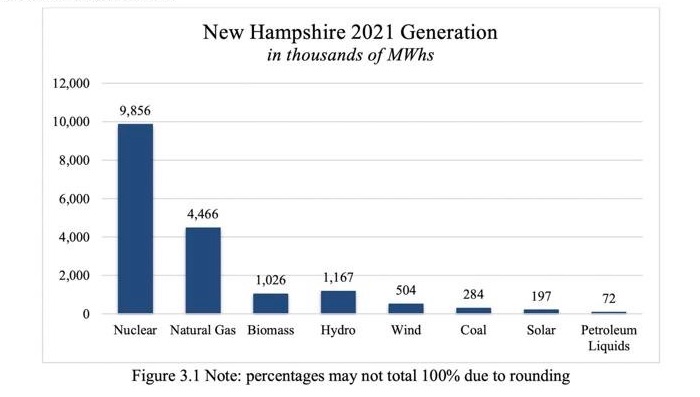 New Hampshire’s 2021 electric generation, as cited in a 10-year report from the Department of Energy.

New Hampshire officials are recommending that the state adopt policies that focus on lowering energy costs for consumers as the state pursues long-term environmental goals.

A new 10-year energy strategy plan released by the New Hampshire Department of Energy calls for prioritizing the high cost of energy and recommends that the state limit government intervention and subsidies while turning to the market to bring down energy costs.

“Expensive energy – or pursuing policies that raise the cost of energy – directly and negatively impacts New Hampshire families and businesses and the quality of life in our state,” the report’s authors wrote. “As such, the priority of the strategy is to organize goals around cost-effective energy policies.”

In the 88-page report, state officials point the blame at neighboring states like Massachusetts for purchasing “expensive” renewable energy, which they say is driving up regional energy costs. They also point to a lack of cheaper alternatives, uncertainty in global energy markets, a lack of adequate infrastructure, and the state’s geography.

“Without a paradigm shift in public policy, New Hampshire is unlikely to see lower energy costs in the short or long-term, the report’s authors wrote.

In a statement accompanying the report, Energy Commissioner Jared Chicoine said every new law and policy decision related to energy “should be looked at through the lens of the ratepayer” and said the state’s long-term strategy seeks to promote “innovation, sustainability, and affordability.”

He said the report seeks to establish a “framework for policymakers and stakeholders” to help steer the development and evolution of energy policies in the state.

New Hampshire’s energy prices are among the highest in the nation, officials noted in the report, with the average resident spending $4,078 a year on energy costs, according to the U.S. Energy Information Administration.

Meanwhile, commercial and industrial consumers in the state are struggling to compete against businesses in lower priced regions of the country, the report noted.

This month, the cost of electricity in New Hampshire is expected to increase by at least 50% which will increase the squeeze on energy consumers.