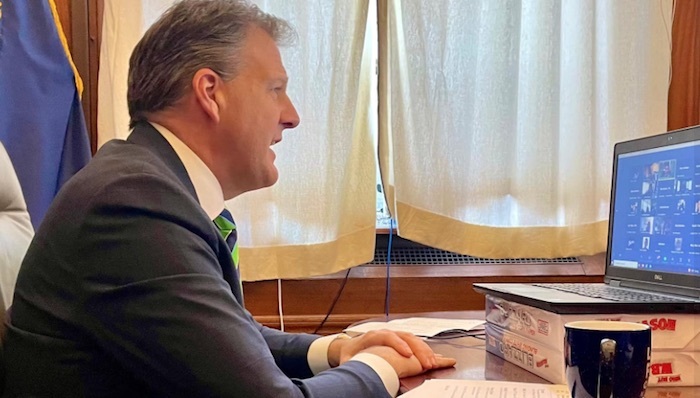 Under the new law, qualifying workers can take the time off for the birth of a child or to care for a newborn, an adopted baby or child. They could also get time off to care for family members with serious health conditions. The state’s 11,000-member workforce automatically qualifies for the benefits.

A new voluntary paid system for New Hampshire’s workforce is being advanced by Republican Gov. Chris Sununu even as lawmakers consider plans to scrap the program.

On Monday, the Sununu administration released a request for bids from commercial insurance carriers to administer the Granite State Paid Family and Medical Leave Plan, which will provide qualifying workers with 60% of their average weekly wage for up to six weeks per year.

Sununu said implementing the program is moving ahead “full steam” and called the move “the right direction for New Hampshire families.”

“A statewide, private-market, truly voluntary paid leave plan does not exist in any other state, and New Hampshire is leading the way,” Sununu said in a statement. “After years of talk, we are finally moving forward with a viable paid leave product that is available to anyone who wants it and forced upon no one who does not.”

To be sure, the Sununu administration’s push to implement the program comes as lawmakers move ahead with a proposal to repeal the law that created it.

Two weeks ago, the Legislature’s House Labor, Industrial, and Rehabilitative Services panel narrowly voted to approve the committee’s recommendation that the bill “ought to pass.” The bill must still be approved by the full House and Senate, each of which is Republican majority.

Lawmakers who support the repeal say the law is an example of “government overreach” and argue that taxpayers shouldn’t foot the bill for state workers who are also covered by it.

The new paid family and medical leave program, which gets underway in 2023, was approved as part of the state’s two-year $13.5 billion budget signed by Sununu last year.

Under the new law, qualifying workers can take the time off for the birth of a child or to care for a newborn, an adopted baby or child. They could also get time off to care for family members with serious health conditions.

The state’s 11,000-member workforce automatically qualifies for the benefits.

Businesses that participate in the program and pay for employee premiums can deduct 50% of the amount they paid in premiums from their business enterprise taxes.

New Hampshire has wrangled over the creation of a paid leave program for several years, with partisan divisions over making the program mandatory for employers.

Sununu vetoed a “universal” paid family leave bill approved by the then-Democratic controlled Legislature in 2019. He called the plan an “income tax” and vetoed a similar effort offered by Democratic lawmakers last year.

In a statement, Deputy Insurance Commissioner D.J. Bettencourt said regardless of the repeal effort the state agency “has an obligation to ensure that any law passed by the legislature and governor is implemented successfully, and we are committed to fulfilling that duty with the best interests of Granite Staters in mind.”

“With this voluntary plan,” he said, “New Hampshire has once again shown how innovative approaches to public policy issues can provide viable solutions.”