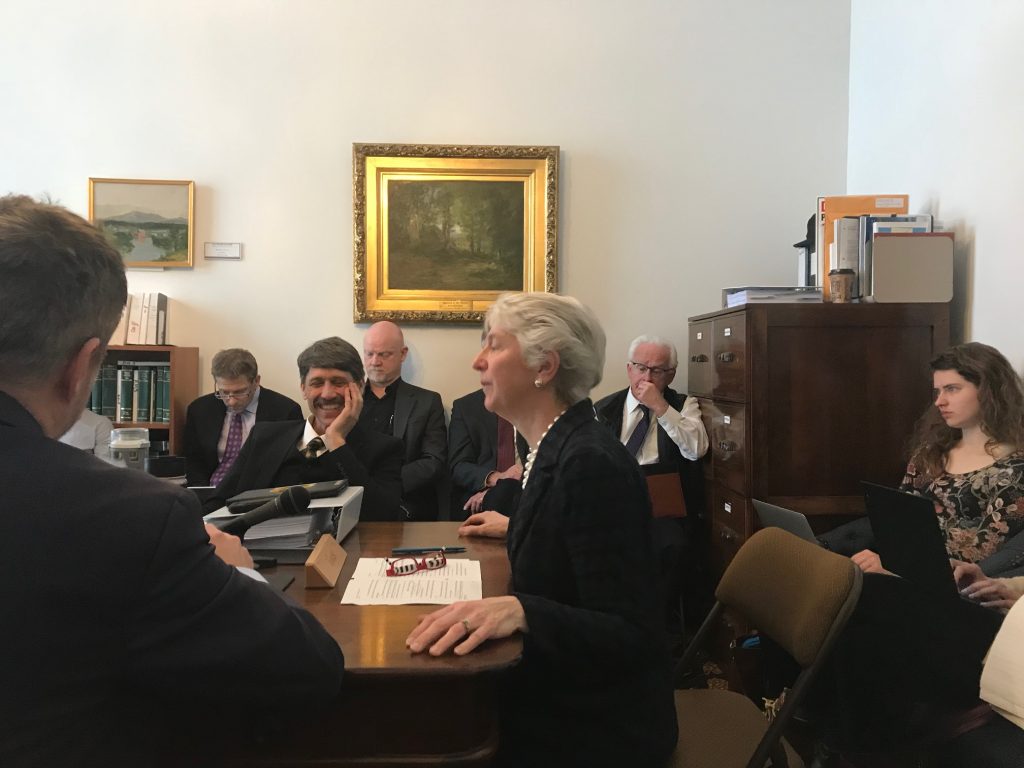 NO CARBON ALLOWED: Sen. Alison Clarkson, D-Windsor, presents a bill that would ban construction of any new “fossil fuel infrastructure.” The bill seems to apply mostly to natural gas pipelines, currently one of the most viable sources of home heating.

MONTPELIER — Earlier this week, Sen. Alison Clarkson, D-Windsor, gave the Senate Natural Resources and Energy Committee a run-down on a bill that would ban any new fossil fuel infrastructure in Vermont.

The bill prohibits construction of anything that moves carbon-based fuels around — in particular, natural gas pipelines. A similar bill, H.51, was introduced in the House this week.

The language of the bill, S. 66, offers a few exceptions: “The phrase does not include motor vehicles, underground tanks or pipes located on the site of a motor vehicle service station, or pipes leading to a residential or commercial building from a fuel tank to which fuel is delivered by motor vehicle.”

Like most green energy policy, the bill is all about “addressing climate change, one of the greatest challenges of our time,” Clarkson told the committee Tuesday.

“Any further investment in such [fossil fuel] infrastructure would be irresponsible,” Clarkson said.

Sen. Corey Parent, R-Franklin, asked how ongoing infrastructure repairs might be affected by this bill, noting the language prohibits reconstruction. Clarkson said that is something the committee must consider. She added if the repair mitigates a safety risk, then it should be allowed.

Parent noted there are also methane digesters or “renewable natural gas” which takes existing methane emissions from landfills and farms and converts it into energy. Clarkson said she’d need more information on such technologies.

The Vermont Climate Caucus, a group including at least 60 lawmakers, is the driving organization behind the House and Senate infrastructure ban bills.

Matt Cota, executive director of the Vermont Fuel Dealers Association, recently told the House Energy and Technology Committee why fossil fuels still play a critical role in the region’s energy infrastructure. He said that when natural gas was exhausted during a prolonged 2018 cold-spell, it was conventional fuel oils that saved the day for electricity and heat.

In all, 83 million gallons of fuel oil — all that Vermont uses in a whole year — was consumed in New England in just 15 days.

“That was not an insignificant amount of oil they had to use, primarily because the natural gas industry didn’t have enough capacity in their pipes to feed the power plants on the cold days when electricity and heat demand was at an all-time high,” Cota said.

He said he opposes any bills that inhibit new infrastructure.

“The big concern is that you don’t want to ban fossil fuel infrastructure because heating oil, diesel fuels, gasoline, natural gas are a key part of our energy systems,” Cota told True North. “Banning the construction of transportation infrastructure that delivers this important fuel to Vermont without having an adequate backup plan is not something that we think Vermonters support.”

He also noted that while the language in these bills makes an exception for underground tanks, it does not for above ground tanks.

“This is a problem for more than 65 percent of Vermont homes and businesses that have an above-ground storage tank, and presumably would want to replace it so they can continue to use oil, kerosene and propane to stay warm,” Cota said. “It also contradicts state policy to fund the installation fuel oil tanks for low-income Vermonters if the old tanks are red-tagged due to safety concerns.”

“Vermont Gas shares the state’s vision for a cleaner energy future and our commitment is to help customers and communities by reducing their carbon footprint and lowering their energy costs with natural gas — including offering renewable natural gas — and our award-winning energy efficiency programs.”

The statement continued, “A ban on natural gas infrastructure would move Vermont in the wrong direction resulting in fewer clean energy choices for Vermonters leading to higher carbon emissions for our state.”

The bill would likely be the end of any expansion of the natural gas pipeline that runs through Vermont’s borders down to Middlebury.

The bill is an apparent push to meet the state’s Comprehensive Energy Plan, which states: “Meeting this goal will require us to virtually eliminate Vermont’s reliance on fossil fuels, which we can do through enhanced efficiency and greater use of clean, renewable sources for electricity, heating, and transportation.”