A bill sponsored by Rep. Brian Smith, R-Derby, would prohibit flags other than the U.S. flag and State of Vermont flag from being flown on public school property in Vermont.

All the co-sponsors of H.92 are Republicans: Reps. Lynn Batchelor of Derby Line, Patrick Brennan of Colchester, Rodney Graham of Williamstown, Robert Helm of Fair Haven, Mark Higley of Lowell, Marcia Martel of Waterford, and Arthur Peterson of Clarendon. 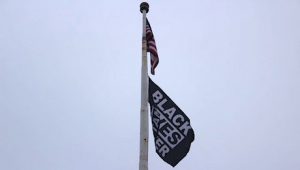 Outside Montpelier High School, the flag of a controversial political movement waves next to Old Glory.

“In order to allow school boards to focus on educating students and maintaining school buildings without becoming politicized over flag displays, this bill proposes to prohibit flags other than the U.S. flag and State of Vermont flag from being flown on public school property in Vermont,” the bill says.

Since the killing of George Floyd last spring and the rise of Black Lives Matters, many school districts and municipalities have been asked to fly the BLM flag. In many cases, there has lively and at times acrimonious public debate. The bill does not specifically reference BLM or any other organization.

A bill introduced this week into the Vermont House would reduce transportation carbon emissions by expanding public transportation, incentivize electric vehicles and charging infrastructure, and require some employers to take steps to reduce internal-combustion commuting.

H.94 is sponsored by Rep. Curt McCormack, D-Burlington, and co-sponsored by 73 other lawmakers (but no Republicans). The bill would:

The bill was presented at the Climate Solutions Caucus Thursday as one of several climate-friendly bills. Other legislation coming this year:

9 thoughts on “New bill seeks to fly only US, VT flags at schools; other legislation would make public transportation free, require electric buses”