S.30 would prohibit the possession of firearms at childcare facilities, hospitals and certain public buildings. It’s co-sponsored by 15 senators — enough to secure passage if they all vote for it. Co-sponsors are Sens. Balint, Bray, Campion, Chittenden, Clarkson, Cummings, Hardy, Hooker, Lyons, McCormack, Pearson, Perchlik, Ram, Sirotkin and White. All are Democrats and/or Progressives.

Baruth opened a Wednesday, Jan. 20 hearing of the Senate Judiciary Committee by explaining why he proposed S.30: the “unprecedented” threat posed by gun-toting Americans upset by political opponents and mask-wearing policies. 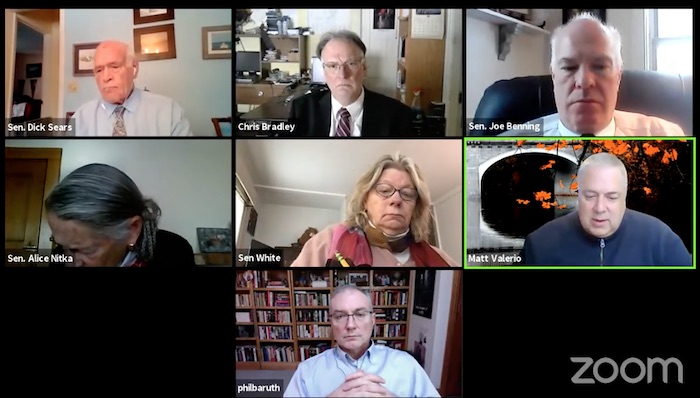 Last year, intimidating citizens brought firearms into state houses, Baruth said. “The pandemic intensified that. Anti mask protests began to merge with armed groups. People in daily life who ask others to wear a mask are being routinely assaulted and threatened. … We’re in an unprecedented time.”

“As everyone knows, incidents have increased in number to the point where several days ago every state capital in the nation was on a form of lockdown because of threats of armed revolt, insurrection, protest — we’re in a state where no-one really knows what to call it,” Baruth said.

S.30 proposes “just the absolute minimum on what everyone could agree on,” Baruth said. “If you would ask the average Vermonter they would say these are resoundingly common sense ideas.”

State law already prohibits carrying guns in schools (1989 law) and courthouses (1993), Legislative Council lawyer Erik Fitzpatrick told the committee. A legislative rule prohibits carrying guns in the State House. But it lacks the force of law. Capitol police could ask a gun carryer to leave, perhaps cite them with trespass or breach of peace. But no gun carrying laws cover the State House – or other government buildings, childcare facilities, or hospitals.

“Isn’t that odd that some public officials are protected by statute and others are not?” asked State Auditor Doug Hoffer. “I think it’s a good idea, a good bill.”

A string of other state officials testified in support of S.30, most of them also offering re-election congratulations to other elected officials on the call.

Attorney General TJ Donovan — “I support this bill. This a common-sense appoach, a reasonable solution. People have a right to feel safe and not worry about guns. Intimidation is real.” Last week a constituent told Donovan about an “argument about a mask and someone lifted up a jacket or a coat and showed a gun. This is real.”

Sen. Joe Benning, R-Caledonia, pushed back on the ‘intimidation’ concern. “If we are passing this bill because people are intimidated, we are opening up a unending list of places where intimidation alone brings in similar statutory moves,” Benning said. The bill seeks to prevent violence. “I don’t want to get on the slippery slope because someone is intimidated by the presence of a weapon.”

Treasurer Beth Pearce supports it too. She worries about potential threats to her workers from stressed-out retirees. “Sometimes you have some stress, as people are looking at retirement …  It can get a little tense there.” People have contemplated suicide on the phone. A visitor (non-threatening) did walk into their office carrying a gun, she said.

Secretary of State Jim Condos — “I support the bill. We’ve had several incidents over the last few years due to threats…. We had quite a few after the election.”

Ditto, said John Campbell, executive director of the Vermont State’s Attorneys and Sheriff’s Association. “We wholeheartedly support the bill,” the former police officer and Senate Pro Tem said. Several deputy State’s Attorneys have been physically threatened. “Recently there has been no shortage of threats.”

And then it was Vermont Defender General Matt Valerio’s turn. He first noted there are 393 civilian-owned firearms in the United States, enough for every man, woman and child with about 60 million to spare. While not taking a position on the bill, he said S.30 offers iffy answers to all four questions he routinely asks about every new crime bill.

Does it violate the U.S. or Vermont constitutions? Probably not, he says — but the Senate should tread carefully.

“Obviously there are Second Amendment issues that arise, but I don’t see them as an impediment to making this sort of limitation to those rights,” because the Constitution doesn’t give ‘carte blanche’ to all gun activities. Yet he added — “I do have a concern for the erosion of constitutional rights. I don’t think you can pick and choose that you like the First Amendment better than the Second Amendment.”

Will the new law solve the problem? Probably not. “The person who wants to use the firearm in a daycare or hospital is not being deterred by the law,” Valerio said. “If you’re not deterred by a life in prison, you’re not going to be deterred by carrying a weapon. There’s no evidence that they do deter the conduct thought to be prohibited.” As a member of Gov. Scott’s recent task force on violence protection, “it became clear that more criminal laws and protections were not going to increase safety,” he said. Prevention and training works better.

Could the new law harm those it’s meant to protect? He said the bill may create a situation in which “the only people who can’t respond … are the people working there because they don’t have the ability to defend themselves.”

Valerio suggested turning the bill into a civil violation (similar to a traffic ticket) rather than a crime. That way police would have the authorization to escort someone from the premises. But Baruth made it clear he wouldn’t accept such a downgrade.

Finally, Executive Director Chris Bradley of the Vermont Federation of Sportsmen’s Clubs was allowed to testify in the closing minutes of the hearing. “Vermont is the second safest state in the nation,” next to Maine, Bradley said. “Our laws stand in contrast with New York and Massachusetts, where we see double the crime rate of Vermont. Firearms are part of our culture. It [carrying firearms] represents the ability of Vermonters  to defend themselves.”